When I moved house, one of the key things I wanted to do was wall mount my 34” ASUS ultrawide monitor as the stand was taking up a colossal amount of space on my desk. Coupled with that was an idea to wrap a Philips Hue Lightstrip around the back to create some form of ambient lighting. I’ve now gotten around to doing both and I’m really pleased with the results. 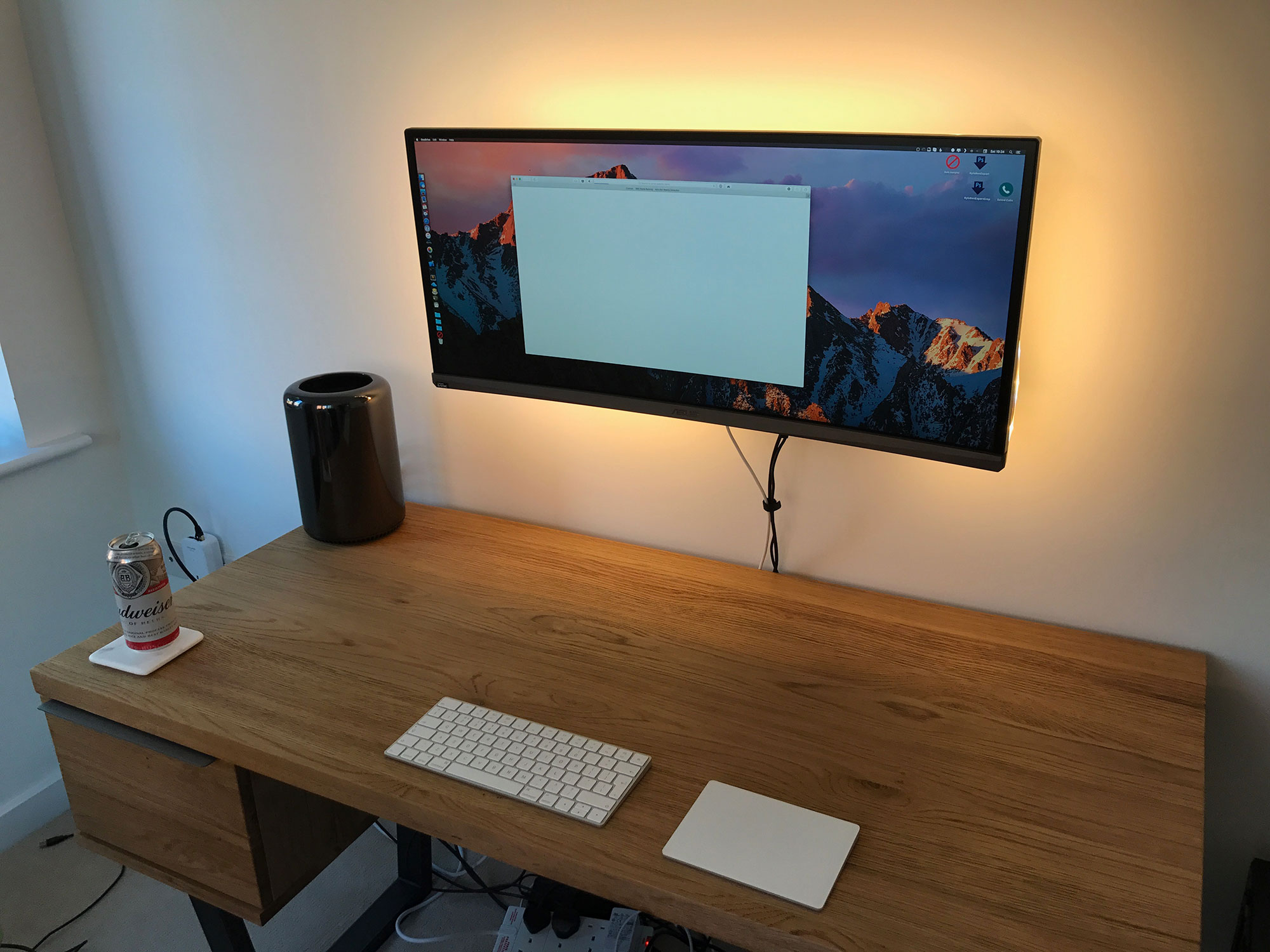 I used to have a Lightpack PC on the back of my iMac and my original hope was to transplant this to the back of my gaming monitor when I purchased it last year. Unfortunately it broke during movement and I was never really that pleased with it anyway; whilst it could show different colours around the entirety of the monitor (i.e. red one end, blue the other) and work these out from what was on display, the brightness was pretty low as was the number of colours it could actually display. The Lightstrip doesn’t let you change colours along its length nor can it work as a true ambient light based on HDMI passthrough but it displays a much better range of colours, is much brighter, and can be controlled via the excellent Hue apps and open API. Due to this, my initial thought was that I would use it as a basic ambient light and then maybe have some presets for certain games like Rocket League i.e. have a Flic button on my desk so I could switch between an orange or a blue depending on which team I was on in a given match. 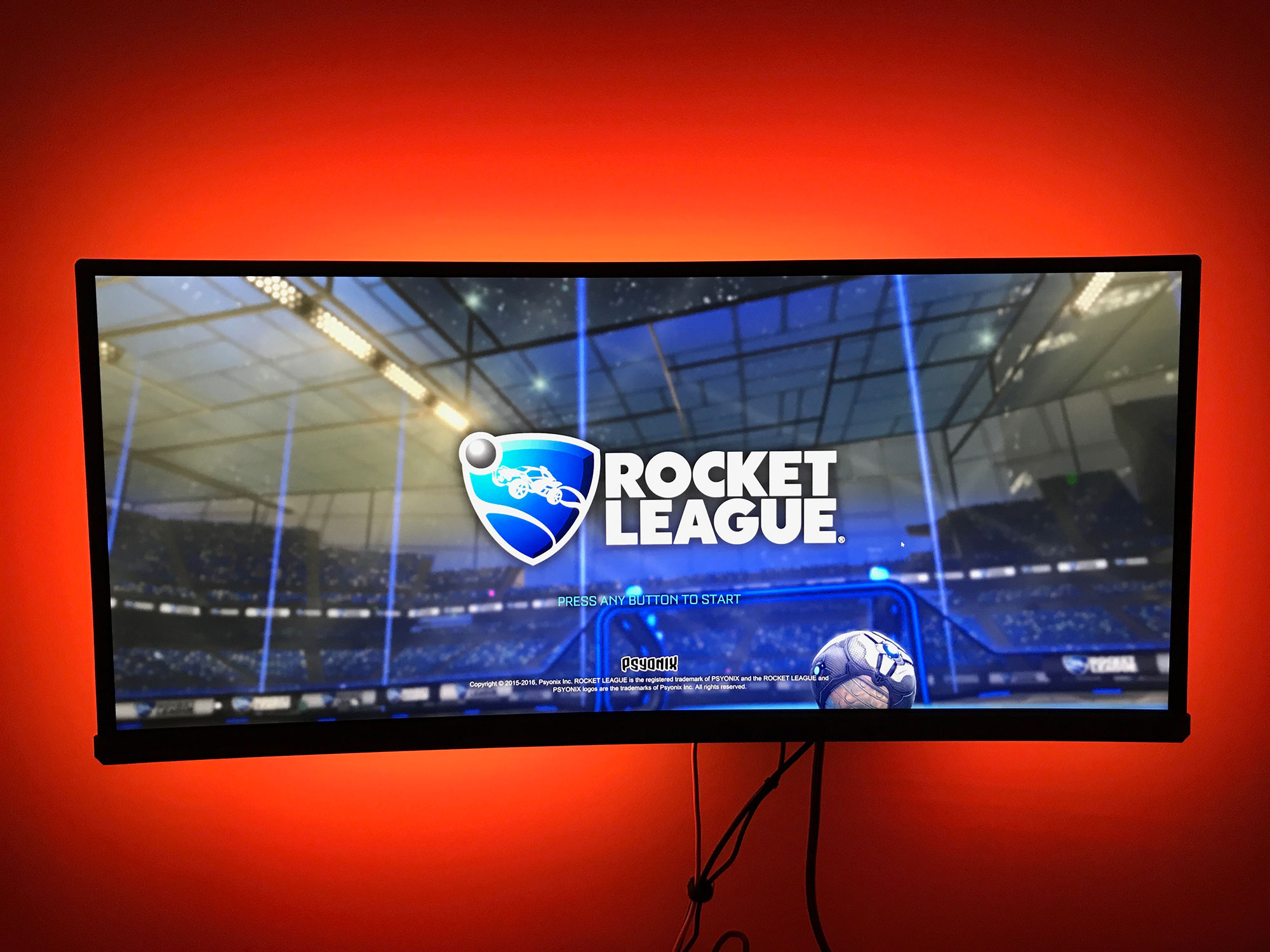 No filters were applied to this image - the orange really does look that nice!

After playing a few matches like that, I started getting into the realms of fantasy wondering if I could build an app to either pluck the score from regular screenshots or sniff through the memory of the game in order to automatically switch between orange and blue depending on which team was winning. My friend and Rocket League partner John had heard of somebody linking their current boost level to the brightness of their backlit keyboard and so it definitely seemed possible.

Eventually, though, I found ScreenBloom, a free app for both PC and Mac that approximates a Philips Ambilight TV by taking an average colour sample of the screen (with optional saturation boost) and then changing the backlight to that single colour. Whilst there is a little latency due to the capture and wireless communication, it is perfectly usable even in a fast-paced game. The release notes for the app say that it can only be used for gaming when in fullscreen borderless windowed modes but I’ve found it works just fine in true fullscreen at least on my G-Sync enabled setup. 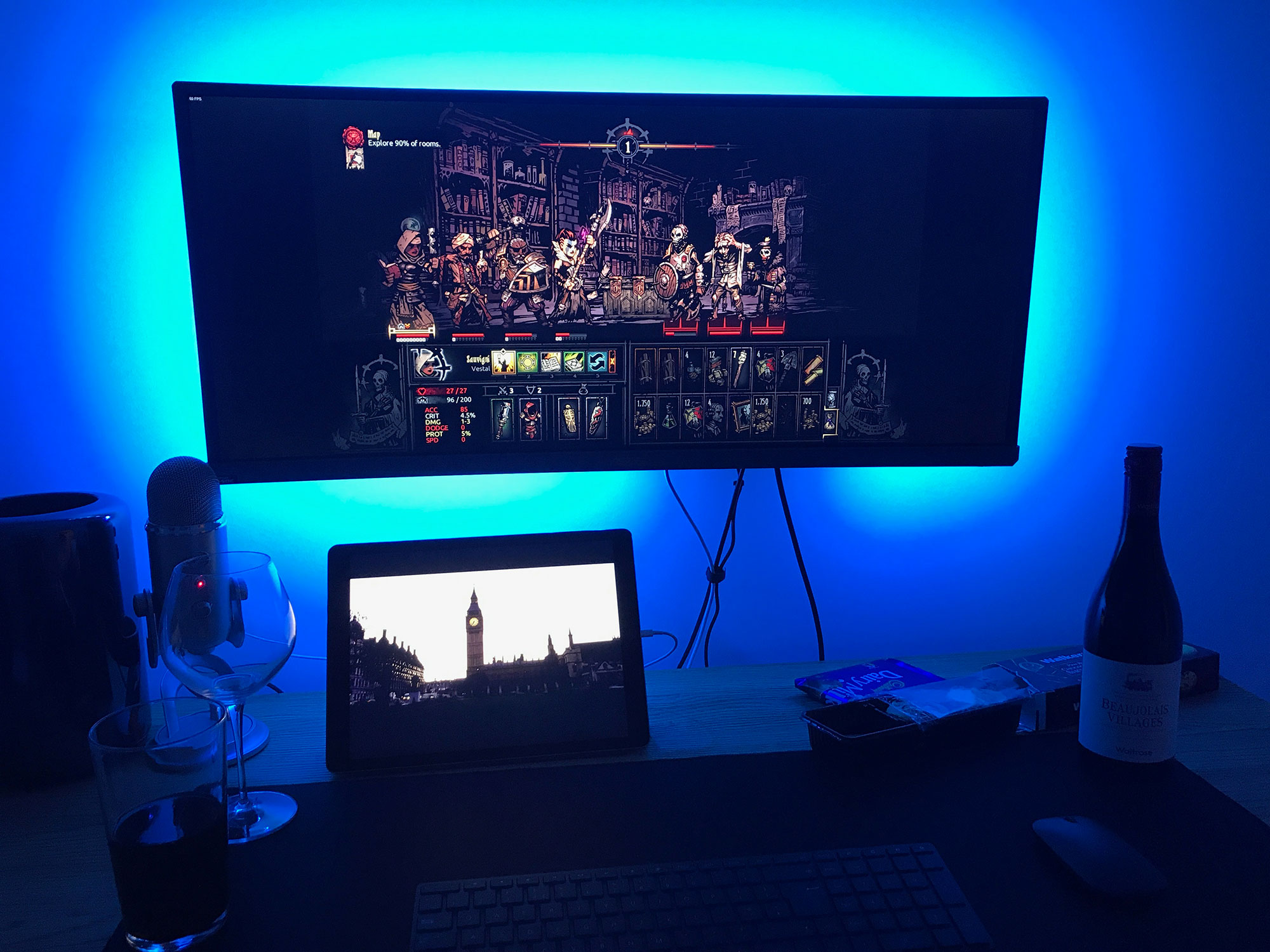 Using a strong and stable blue for election night

Depending on your setup, ScreenBloom will take up ~16MB of RAM and anywhere from 3-15% of your CPU. I haven’t noticed any ill effects from using it in the background whilst gaming and even without being able to change the colour of the strip at different points the ambient effect is very compelling. I dropped the animation time from 0.7 seconds to 0.3 seconds and that made it feel a bit snappier without having it flash when changing between colour extremes.

One of the nicest features is the ability to use multiple Hue products and divide your screen into different zones. For example, you could have a Hue Bloom on each side of your monitor and divide them into the left and right of the contents of the screen for a better ambient effect. I have two spotlights in my study pointing at the desk so I’m very tempted to replace the current white Hue bulbs with colour ones to make use of that feature.

If you’ve ever wanted an ambient backlight but have been put off by the high prices of bespoke solutions like the LightPack or Ambiscreen (or their lack of support for anything other than HDMI) then I can definitely recommend the Hue Lightstrip even without the ScreenBloom app. Coupling it with ScreenBloom definitely leads to a better look though, especially if you have multiple Hue products for a full room effect.