Splatoon 2 is the Switch-exclusive sequel to Splatoon, a game that was allegedly installed on one-in-every-three Wii U consoles. Over the weekend Nintendo performed a ‘Global Testfire’, an open beta in a bizarre system of six single-hour windows over three days. I never played the original Splatoon so eagerly took part in two of these testfires to see what it was all about. 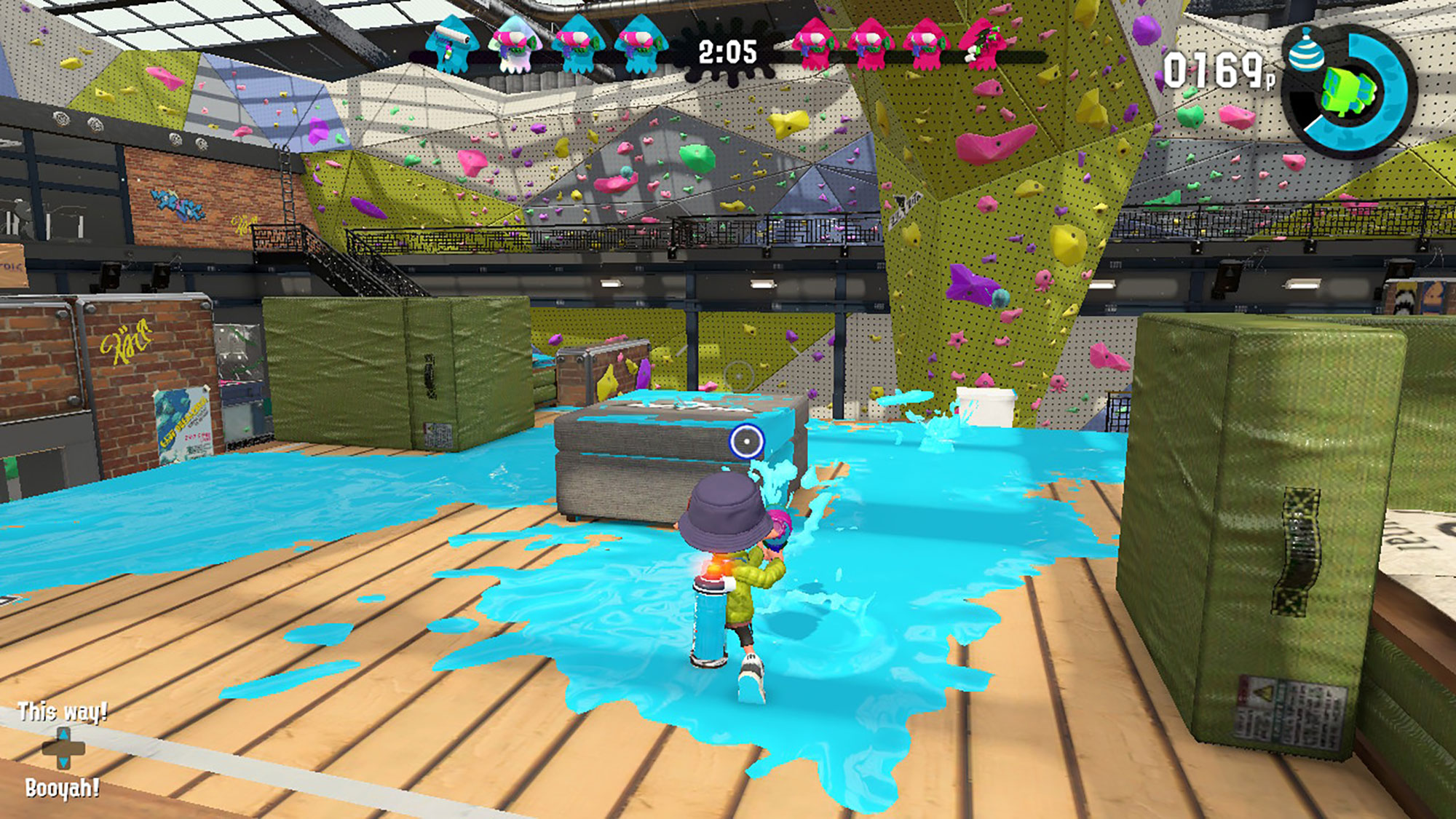 Surely it should be named SplaTWOn?

A brief tutorial is displayed the first time you play which demonstrates how the traversal and weapons work. Movement is done with the left stick and you can rotate using the right stick; aiming, however, is locked to motion controls with tilting required to look up and down. After a brief panic, I was happy to see this could be turned off as soon as the tutorial was over leading to a much more natural free-look with the right stick.

The basic premise in the 4v4 ‘Turf War’ (the only game mode on offer during the test) is to cover as much of the map as possible in ink before the time runs out. You can cover the majority of surfaces in the map but the real fight is generally in the centre where you’ll be wanting to replace any ink sprayed by the enemy with your own. Whilst you can kill (sorry, splat) other players, this has no bearing on the finishing score and instead serves as a way to slow down your enemy for a few seconds.

One of the most interesting mechanics is that you can turn into a squid by pressing the L trigger; in this form, you dive into your ink and you can traverse anywhere your ink has been splatted including vertically up the walls. This squid form is also how you refill your ink tank (which quickly drains as you shoot) whilst also being a good way to evade enemy attacks.

A map can be called up that allows you to see the current state of the battle for ink dominance whilst also providing a ‘super jump’ ability; this lets you essentially fast travel back to the spawn point or to one of your three team-mates although it takes a few seconds so you’ll generally want to be far away from any opposing team members before activating it. I didn’t play the original Splatoon but it isn’t hard to imagine that the map was much more convenient when it was displayed on the Wii U gamepad. 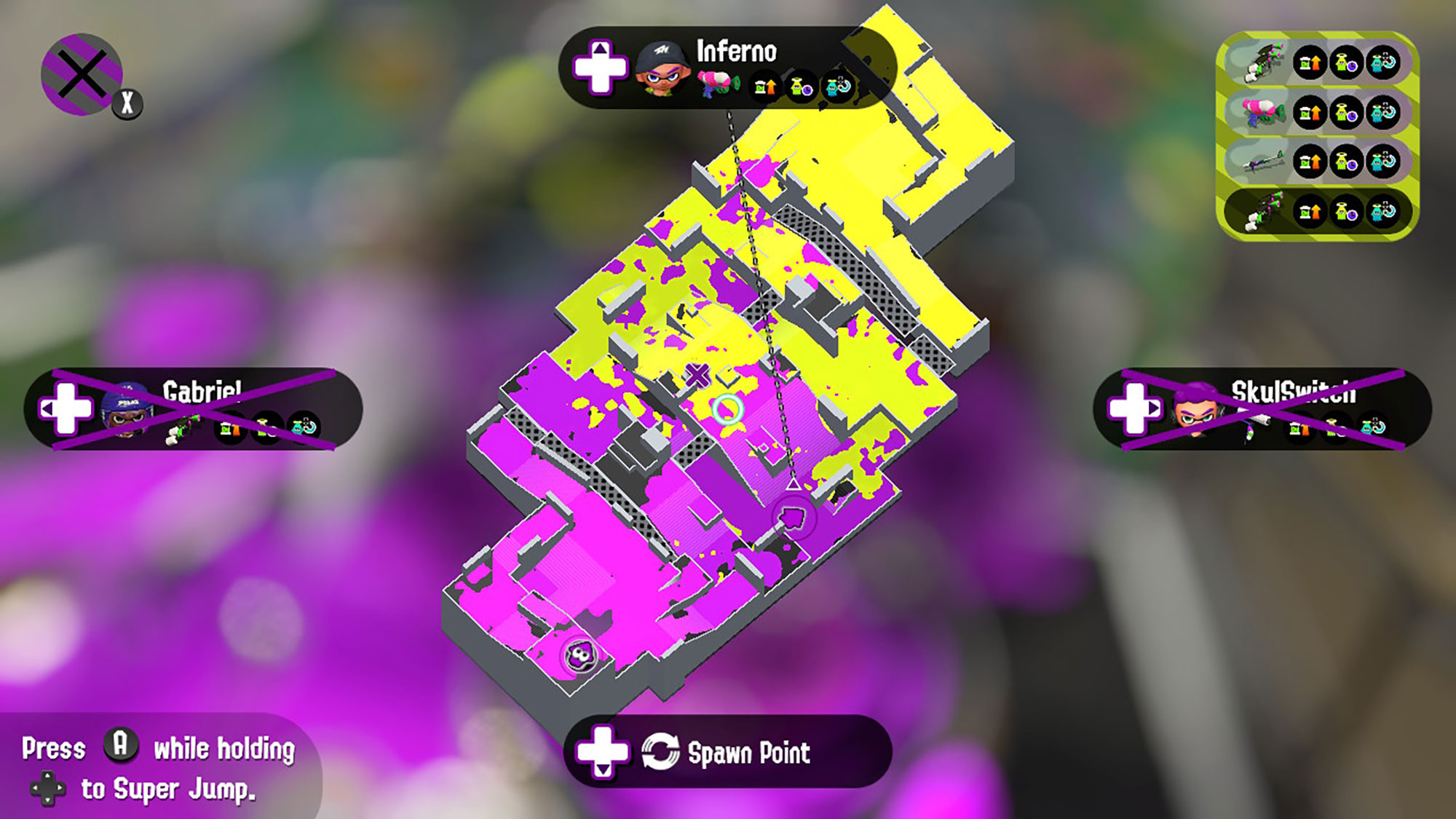 There are four weapon sets in the game that effectively act as character classes. The ‘Splattershot’ is the all-rounder with a simple automatic weapon whilst the ‘Splat Roller’ has more paint and damage but a slower movement speed. More interesting was the ‘Splat Charger’ which is a sniper class with a powerful ability; you can charge your weapon and keep it that way whilst travelling through the ink ready to pop up and fire a deadly shot once you emerge. There is also the ‘Splat Dualies’ (my personal favourite) which wields dual-pistols and is able to roll out of danger.

Each class has a secondary attack which uses more ink and acts more like a grenade. With the Splat Dualies this is similar to a curling stone that skims across the ground ahead of you trailing a line of ink; if it hits a surface, it bounces and continues on its journey until it eventually explodes leaving more ink at the detonation site.

In addition to your primary and secondary weapons, there is also a power attack meter which charges up as you claim territory although the meter decreases if you die adding an extra penalty for death. Once the meter is full, you can unleash your attack by pressing in the right hand analog stick. The power attack is different for each class and ranges from a giant jump and smash with the Splat Roller to a few seconds of jetpacking with a souped-up gun in the case of the Splat Dualies. 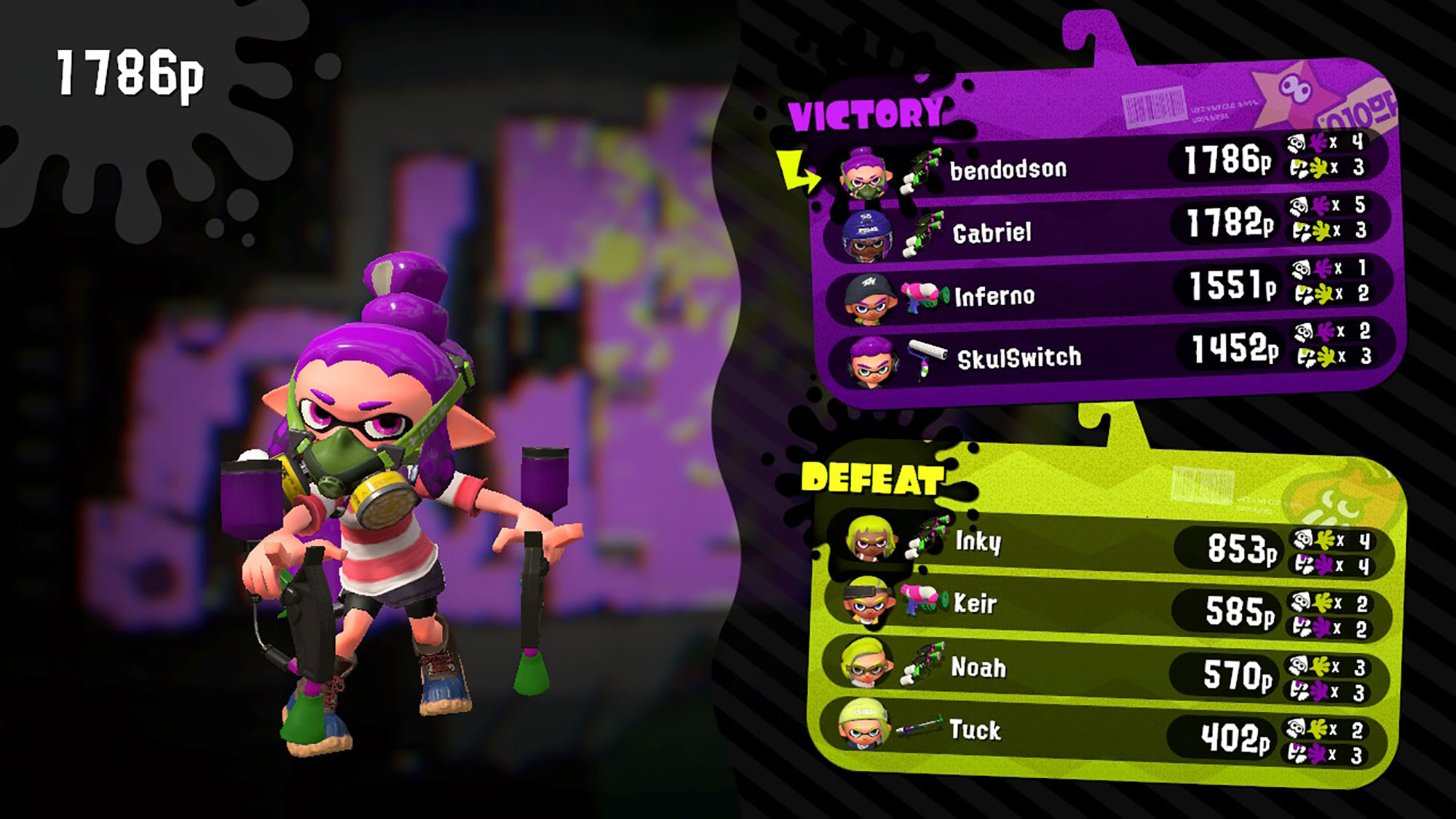 After two hours of playing, I found myself really enjoying Splatoon 2. Both the matchmaking process and the matches themselves are super fast whilst the gameplay is significantly different from every other first-person shooter available. Whilst I’m not sure how it will hold up over a longer period of time, it seems certain that there will be multiple modes of gameplay along with some form of unlockable items or outfits.

If I had a criticism, it would be that it can be hard to tell which surfaces can and can’t be painted on reminding me strongly of the propulsion gels in Portal 2. In addition, you start in a base area which only your team can access but oftentimes your teammates won’t bother painting it missing out on easy points; I spent a lot of matches just painting near the spawn point as nobody else had done it. Finally, we still have no idea how this is going to work in multiplayer in terms of parties and voice chat as there are very few details about the online surface and the mobile app that Nintendo are going to release. I’m still not sure how voice and game audio are going to be in sync via this system but hopefully we’ll find out more once Mario Kart 8 Deluxe launches next month (presumably hailing the start of the online service).

Those minor issues aside, I’m really excited for Splatoon 2 and will definitely be picking up a copy when it launches later this year. There is no word yet on future testfires but I wouldn’t be surprised to see another one in the coming months.