Ben says: "A beautiful little puzzler that sees you building your own underground train network. I'm biased as a train nerd but this is something I constantly dip into, especially on the iPad."

John says: "A simple and fun little puzzle game which is easy to pick up and play. There's a nice mix of cities to play through and the relatively short play sessions fit mobile devices perfectly."

I've been playing with Mini Metro on and off since early 2014 when I picked it up in some form of early access test for $4. Whilst it has been fully published on PC and Mac for a while, it seemed a good time to revisit it with the mobile version for iOS and Android launching last week.

At its core, Mini Metro is a strategy game in which you build track and trains in order to carry passengers between stations; when one of your stations gets overcrowded, the game ends. Whilst described as a "subway layout game", the pedant in me will point out that you get to play with non-subway locomotives such as the Shinkansen in Osaka and trams in Melbourne. 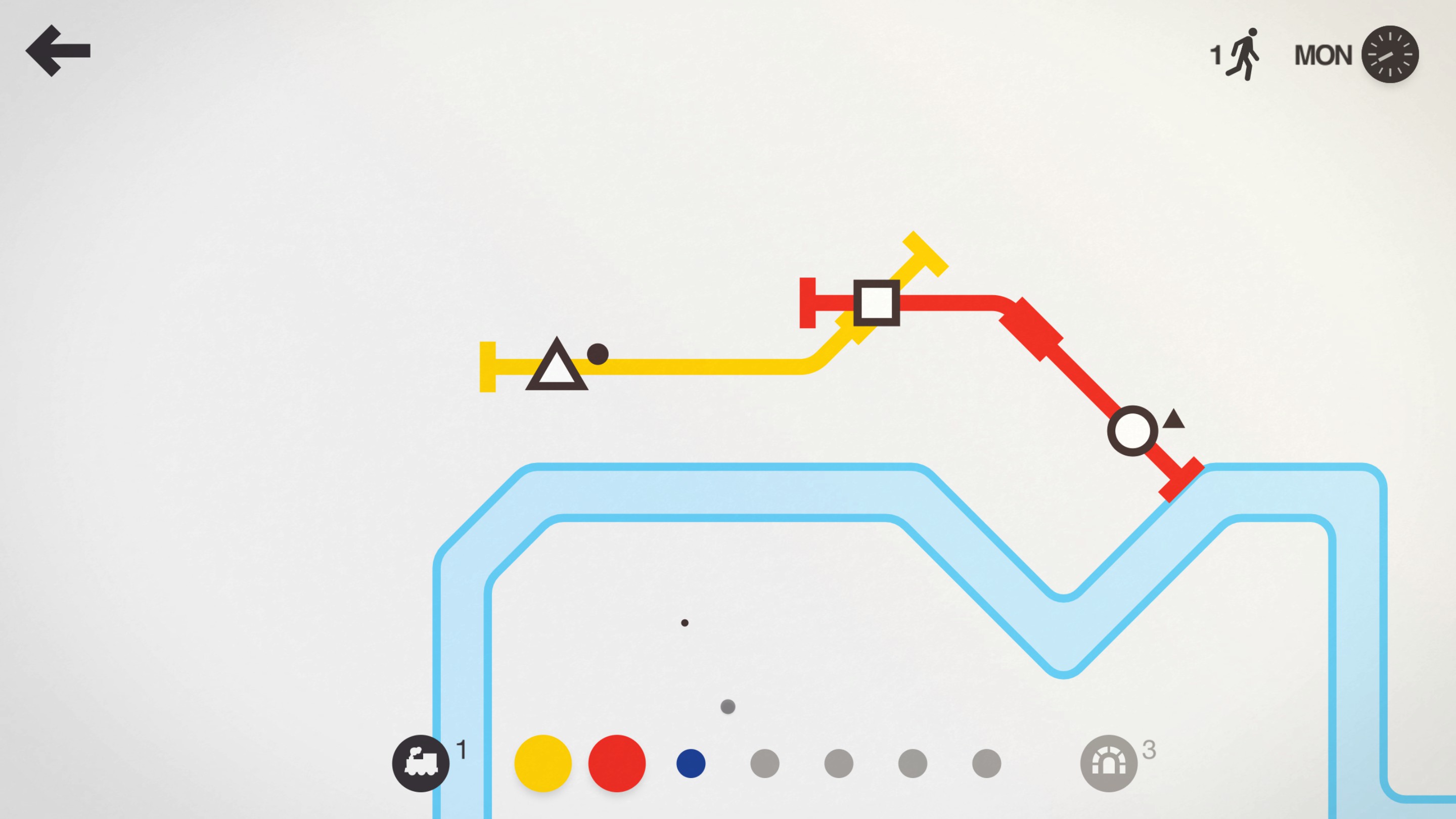 You'll begin in London with three lines and locomotives available to you and then two stations, usually a square and a circle. When you connect them together, you'll use one of your lines and one of your locomotives which will duly start ferrying passengers between each station. Both stations and passengers are basic shapes so it is easy to determine where they need to go; circular passengers go to circular stations, square passengers go to square stations. In short order another station, likely a triangle, will be added and you can choose to extend your basic line or use a new line. If you extend, then your train will just go down the line and then back again whereas creating a junction will cause passengers to need to change trains to get to their destination. Herein lies the real challenge; at some point, as more and more stations get added (which will be of varying shapes), you will have passengers that need to change lines to get to their destinations. When they do so, they join the queue of passengers at that station which only hold a certain number. Once you've exceeded the limits of the station, you'll have around 15 seconds to clear some of the passengers before the game ends.

The challenge, then, is to build the most efficient system so that you can transport passengers as quickly as possible to their destinations and keep them out of the stations. Whilst you start with three lines and three locomotives, you'll gain bonuses at the end of each week which will grant you more of these building blocks. A line can hold multiple trains so a good tactic can be to have a long line with several trains rather than small lines joined together. You can also create closed loops so trains run in a continuous circle; this works very well with multiple trains as you can choose whether they travel clockwise or anti-clockwise.

In addition to this, you also gain access to carriages which extend train capacity and larger stations which increase passenger capacity. Some maps have rivers or other waterways which require tunnels or bridges to cross; these are also a finite resource and on more complex maps like Osaka they can make or break your plans:

I'm using 7 tunnels on this map and I could really do with more!

In terms of gameplay, you have to meet a minimum passenger delivery in order to unlock the next destination around the world. Each of the 13 available maps is different and will have varying challenges be it the smaller capacity trains in Cairo or the booming number of passengers in São Paulo. Once those are all unlocked, there are Daily Challenges to push you to beat other players or the varied achievements which include such things as "Deliver 1500 passengers in Saint Petersburg with tunnels on no more than one line" – tricky! Finally, there are two other game modes; Endless, in which stations do not overcrowd, and Extreme where tracks are fixed in place (you can't demolish and rebuild them as you can in the Classic mode).

In terms of my own experience, I've had great fun playing Mini Metro over around 12 hours on multiple devices. Thanks to its minimalist design, it scales beautifully across all my devices be it 5120x2800px on my 5K iMac or 3440x1440px on my ultra-wide 21:9 PC monitor. The colour palette is minimal but leads to some gorgeous levels that could be genuine transportation maps.

Cairo complete with small carriages and a sandy styling

One of my favourite aspects of the design is the way in which the game seamlessly transitions from a tight aspect showing just 3 stations to a fully zoomed out map encompassing multiple lines. The map is actually constantly zooming out at an incredibly slow speed which allows for this; a simple trick but incredibly effective.

It is also worth mentioning the sound design which is on the same level as the graphic design; minimalist perfection. Every action creates a tone like strikes on a xylophone which, as your network expands, leads to a unique soundscape as passengers unload and new stations appear. Designing Sound had a fantastic interview with composer Rich Vreeland which goes into a lot of detail about how this works. It means that every game has a completely different feel both in terms of the physical layout of your tracks (due to the randomness of the station creation) and the subliminal rhythm of the music you are effectively creating.

The final thing to mention is the mobile version that, whilst teased for several years, was launched last week. I've only played a few games but I can see the iPad Pro being my go to device for Mini Metro in future. The game is effectively the same aside from a reworked UI optimised for touch and is what I like to call a "first-class mobile citizen" in that it supports iCloud Syncing for seamless transitioning between devices (i.e. start a game on your iPad then continue on your iPhone). One nice feature is the ability to export your game as an animated GIF once complete to show how your lines built up over time. I was going to say that it would be nice to see this on the desktop version but upon looking it seems it has been there for some time!

In summary, Mini Metro is an absolute gem of a game and well worth the asking price (£7 on Steam, £4 on iOS). It plays beautifully across all devices be it a gaming PC, a Mac, a tablet, or phone. Whilst it may seem like a game you might just play for a couple of hours, the challenges and achievements will lure you in and keep you going for just one more game. I will certainly be keeping a close eye on what Dinosaur Polo Club work on next.