Sonic the Hedghog has a special place in my gaming history; It was the first game I ever played on my brother's Mega Drive back in 1991 although I thought it was a Samurai Pizza Cats game when I first saw it. Sonic 2 was the pinnacle of gaming for us and I remember re-watching a 3 minute clip we'd recorded from a gaming TV show on VHS before it was released so much we wore the tape out! We must have spent days playing that game and I can still feel him punching me whenever I replay it and hit a bomb in the half-pipe special stages…

Of course, Sonic hasn't really had a very good time of it since the Mega Drive days. Whereas Mario made the transition to 3D seamlessly and grew better and better, Sonic never really made a breakout game and attempts to go back to the 2D games failed miserably. That looks set to change with the release of Sonic Mania next year but before that we have the Sonic Dimensions level pack for LEGO Dimensions. 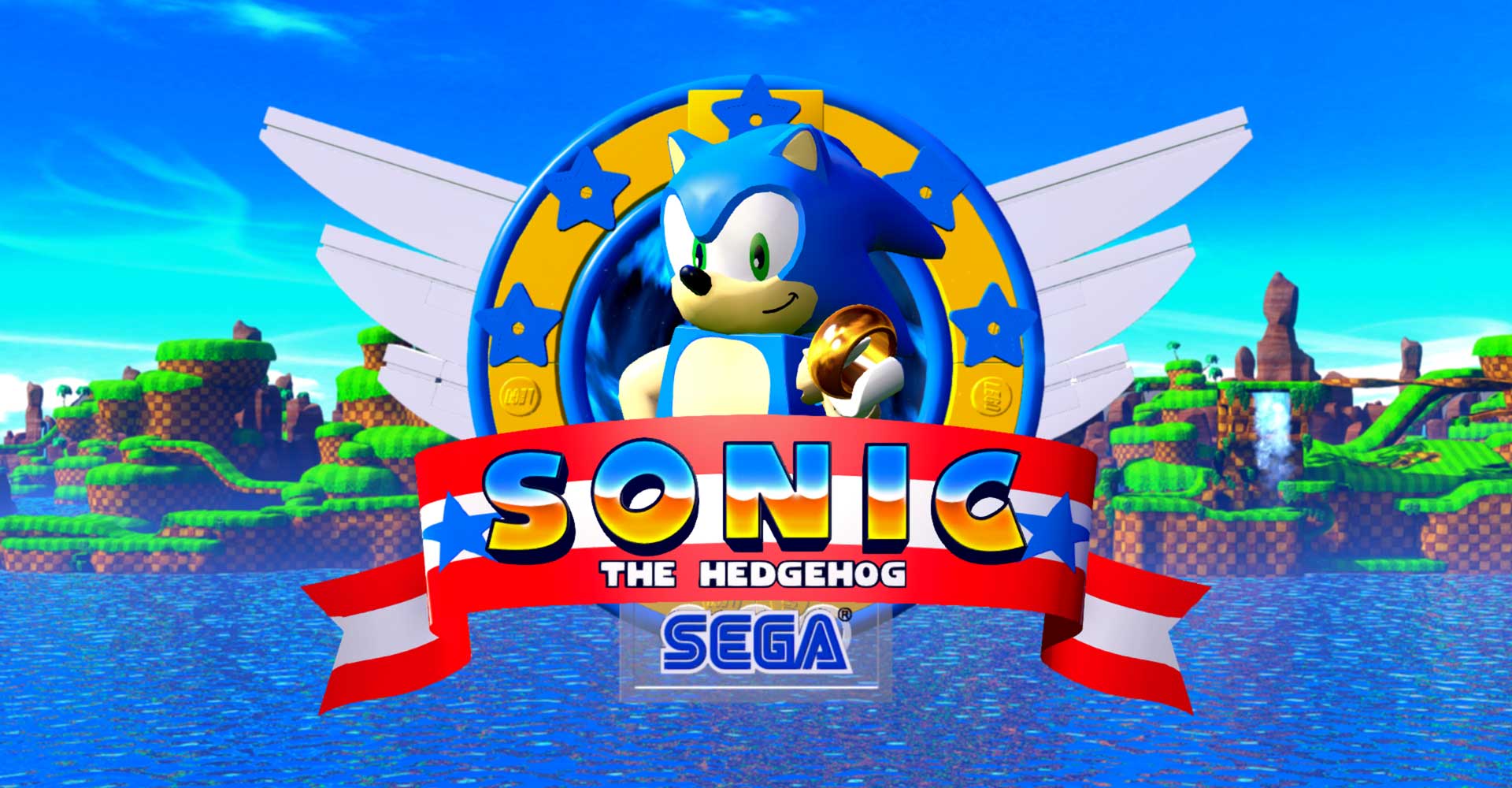 Released as part of Wave 7 of LEGO Dimensions (alongside E.T., Gremlins, and Fantastic Beasts And Where To Find Them), the Sonic level pack has a battle arena, dimension world, and the "Sonic Dimensions" level. Along with the game, you receive the Sonic minifigure, a Sonic Speedster, and The Tornado (the bi-plane that first appeared in Sonic 2). This pack is the only way you can get hold of the Sonic minifigure which has a custom molded head; in the game, he has several abilities including using speed boosts, grinding (new to Year 2), acrobatics, and super strength. Whilst he has the least abilities of any of the newer figures, he is the fastest figure available moving even quicker than most vehicles in the game! 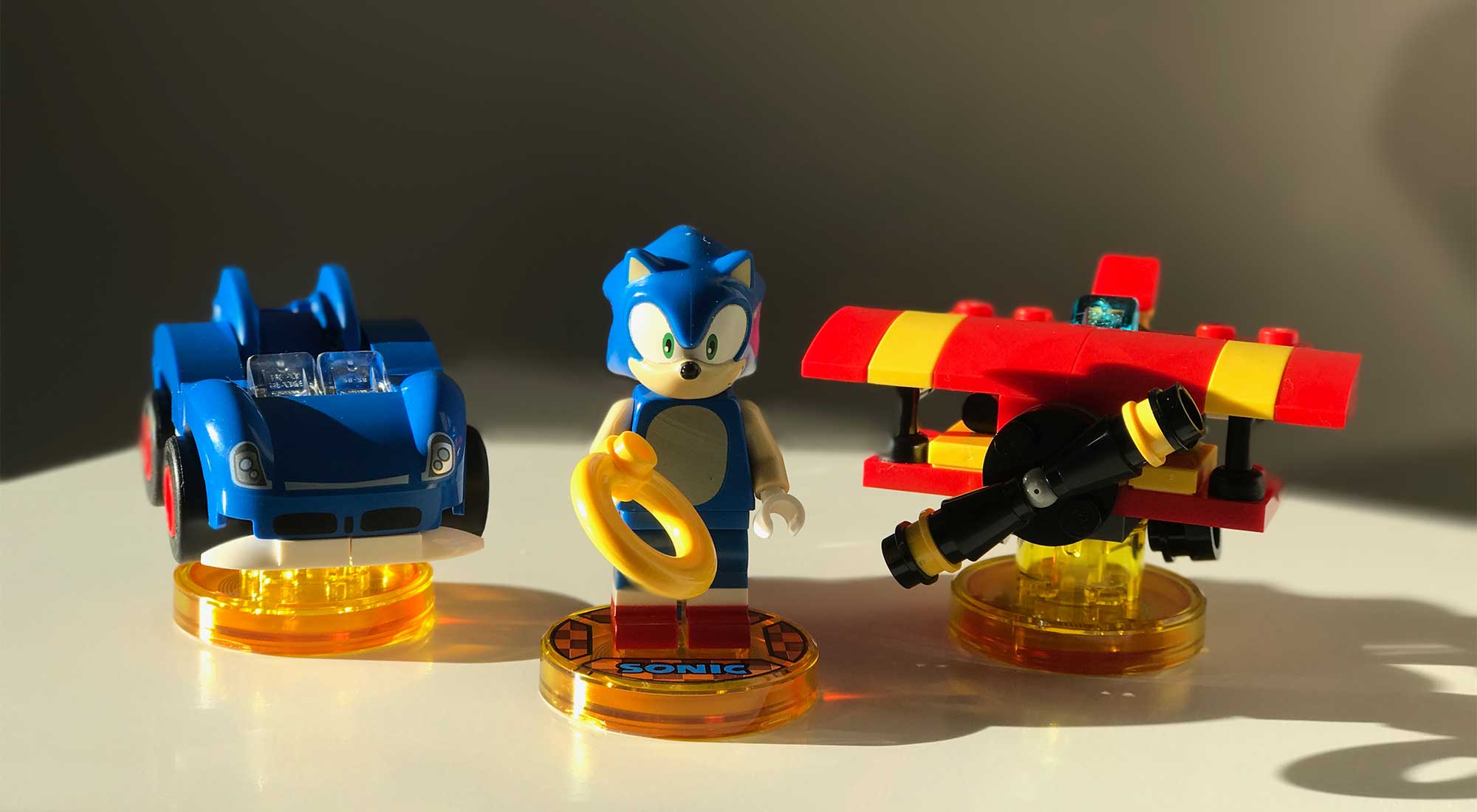 LEGO Dimensions is basically just a nostalgia trip with the majority of its content and nowhere is that more evident than here. As soon as you start the level, a brick built SEGA logo appears with the classic "SAY-GAA" sound from the 16-bit era. You are then dropped into the Green Hill Zone in what feels like a modern version of the classic side-scrolling platformer. Everything is rendered in 3D but you are basically locked on a 2D plane for the majority of the game in a similar way to some of the sections in Sonic Generations. Everything is exactly as you would remember it from the '90s; there are springs, spikes, crabs, jumping fish… even that annoying monkey that throws coconuts from a tree! All the sound effects are perfectly recreated as well in terms of jumps, spins, power ups, and even the tone when you die.

For the purposes of the entire level pack, studs are recast as rings although they still function in the same way (i.e. collecting rings doesn't affect your health or stop you from dying - you still lose 1000 studs when you die). Speaking of health, you may notice in the screenshots that Sonic's health bar is made up of the extra life boxes from the original game. In another nod to the past, leaving Sonic standing idle will cause him to begin his classic foot-tapping wrist-glancing animation and then he'll fall asleep and dream of himself running in 16-bit form. 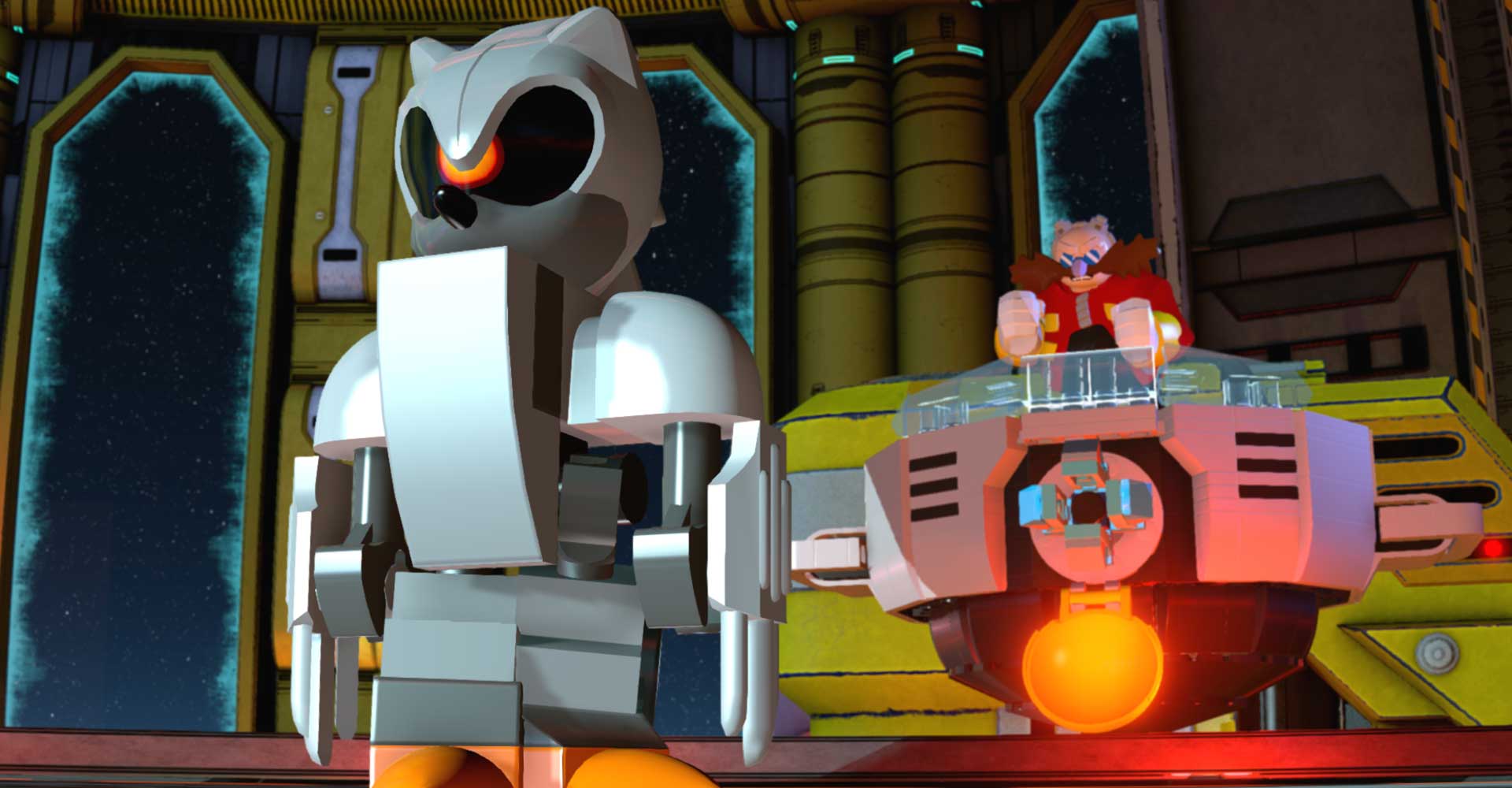 Once through the Green Hill Zone, you jump through a large golden ring to enter a recreation of the half-pipe special stages from Sonic 2. Completing it will gain you one of the seven chaos emeralds that will advance the story which is loosely tied to the dimension hopping plot of the main LEGO Dimensions game. From there, you'll visit several different well-known Sonic locations including the Emerald Coast, Metropolis, Marble Zone, Labyrinth Zone, and the Death Egg and you'll encounter Dr. Eggman and several other previous Sonic villains in fairly simple boss battles. Each area is topped off with another half-pipe special stage although it was a shame not to see recreations of the special stages from the original Sonic game or the headache inducing 3D stage from Sonic 3. 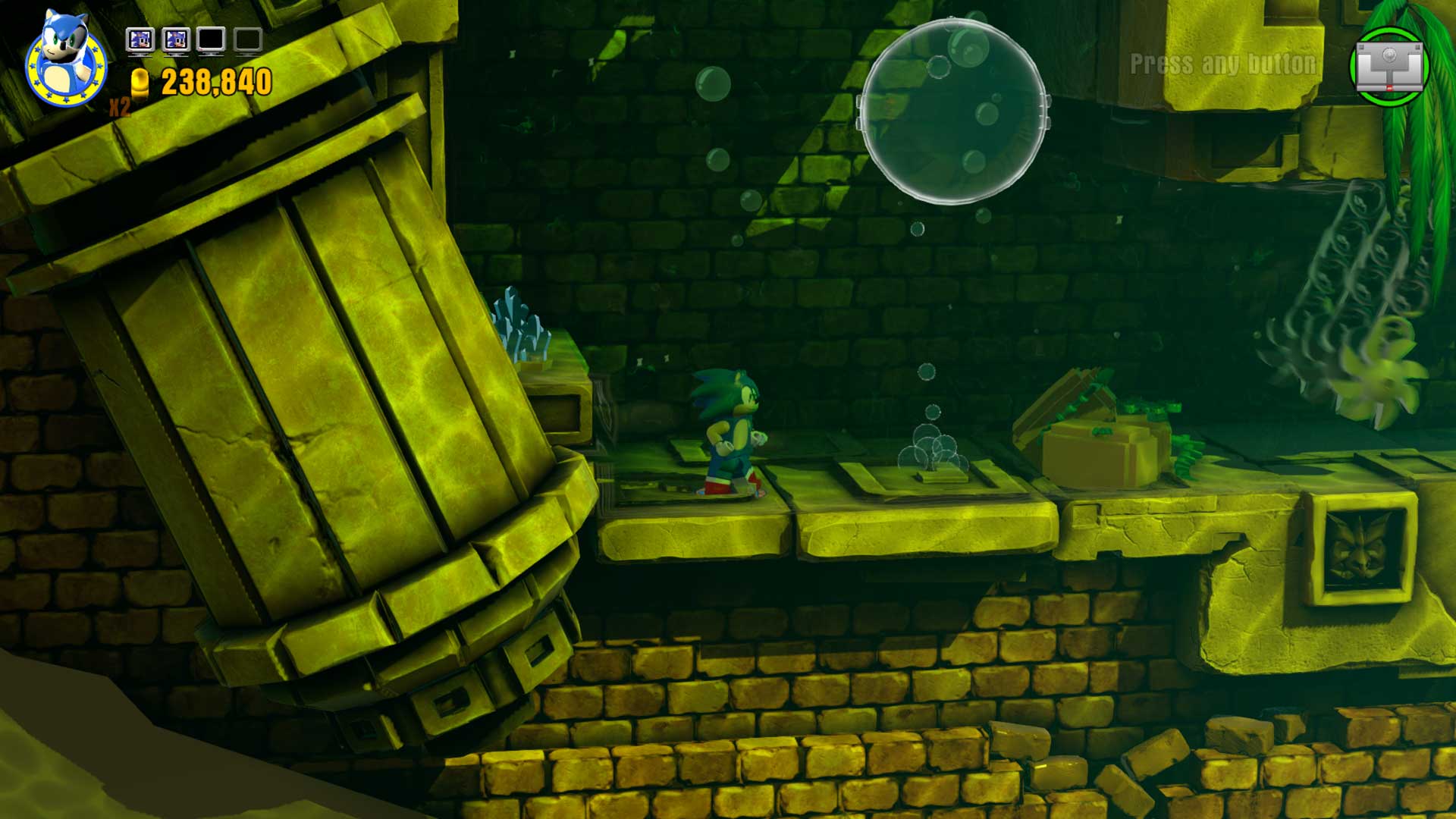 In terms of gameplay, Sonic Dimensions does do several things differently to the standard LEGO Dimensions template. As the game is effectively locked to a side-scrolling viewport, it feels very different to the larger open areas of most other levels and the speed at which Sonic moves is also a big breakaway from the slower gameplay of the other characters. The Green Hill zone has multiple different paths and routes for you to take and will likely take a few trips to see everything it has to offer whereas other levels in the game are almost incredibly linear in design. Whilst these are benefits to the Sonic level, there are some issues; Sonic's speed means you'll constantly bump into things you don't mean to when in other worlds or levels and even in the 2D mode it is easy to get stuck to objects or end up in a different place than you meant to. TT Games have done a fantastic job of putting this entirely different mode of gameplay in but it isn't 100% perfect; I wonder if it'll be improved if they make use of it with other characters in future (I'd personally love to see an Earthworm Jim set but that is probably unlikely!) 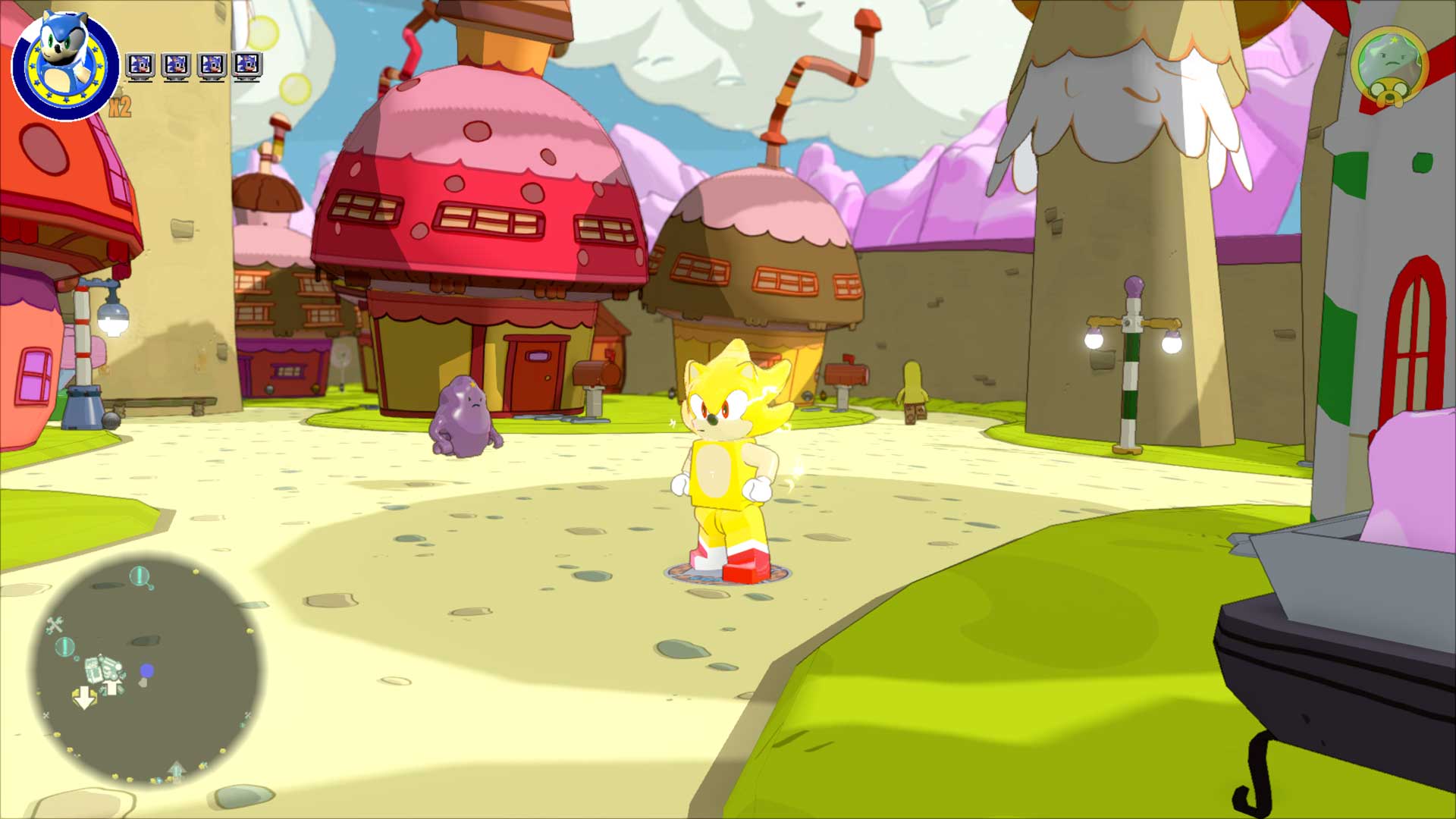 In keeping with most of the other LEGO Dimensions packs, finishing the level will grant Sonic a new ability; changing into Super Sonic. A meter appears around Sonic's avatar and fills up as you collect studs; once filled, you can hold B when you jump to change into Super Sonic at which point the meter will decrease unless you find more studs. It's pretty much identical to the way it worked in Sonic 2 if you found all of the Chaos Emeralds but I was happy to see that it worked across all worlds and levels, not just the ring-based Sonic level. If I had a minor complaint, it would be that I'd have liked Sonic to have a character changing ability like Doctor Who, Abby Yates, Pete Venkman, and B.A. Baracus that would allow me to play as Tails, Knuckles, or Amy.

A few random thoughts on this level pack: 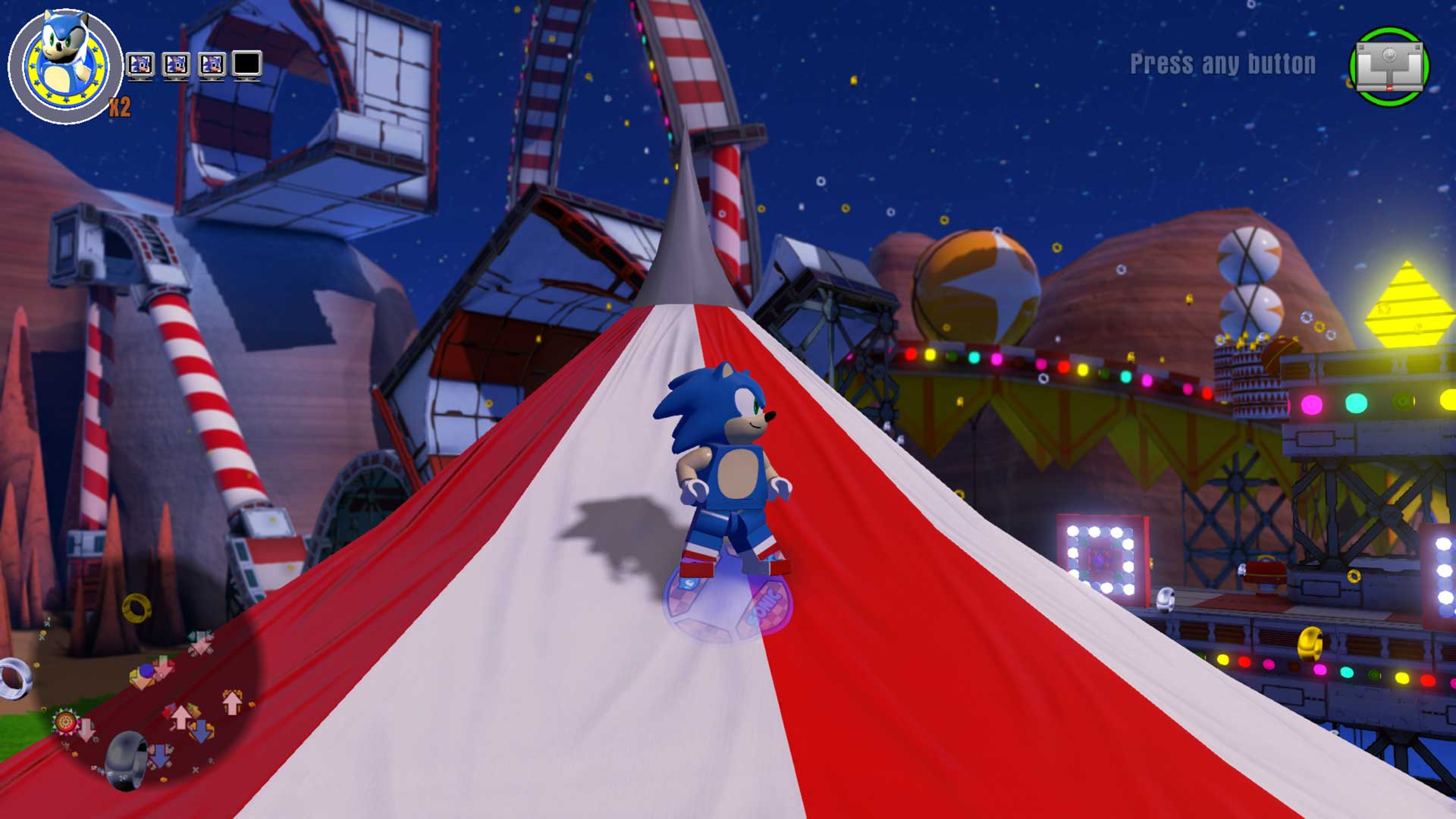 In summary, TT Games have done the impossible and made a compelling 3D-like Sonic game. Whilst some of the controls can be finicky at times, the pure level of fan service that has been applied makes it forgivable. Sonic Team should also be thanked for agreeing to this game and for allowing quite a lot of jokes to be made at their expense. I sincerely hope we'll see more use of the 2D platformer style in upcoming LEGO Dimensions packs.