Ben says: "An unexpectedly deep 2.5D adaptation of games such as Rails and Shortline Railroad. If you like trains then this is a no-brainer but those that enjoy puzzles will also find a lot of variety here. I am far too excited for the sequel which is due in 2018."

Train Valley had been on my wishlist for a fair amount of time before it happened to turn up as part of the Humble Monthly. When I first played it a couple of weeks ago, I almost dismissed it as a clone of Rails but after a bit more time I was hooked and able to enjoy some of the crucial differences. 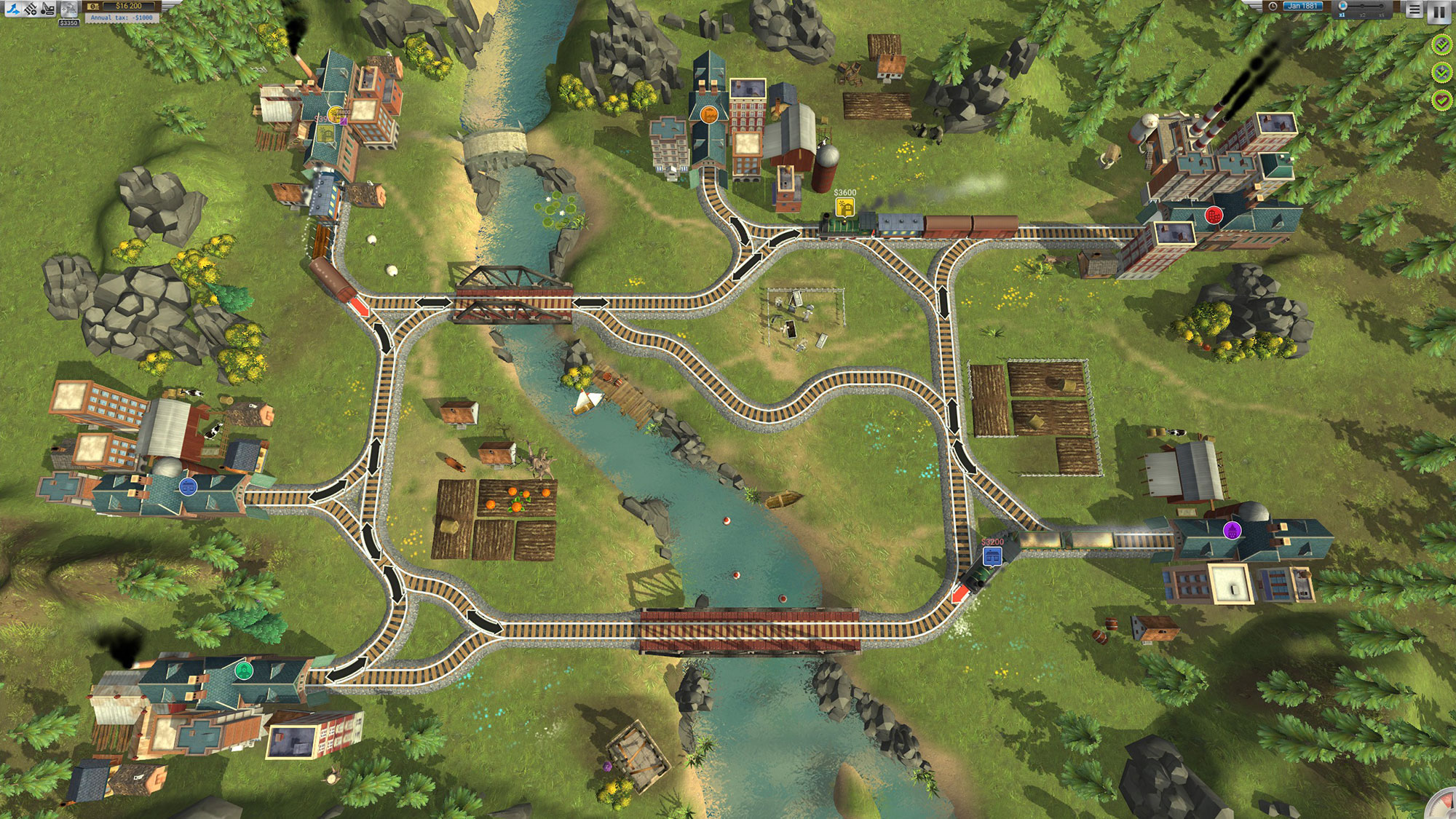 The essence of Train Valley is that coloured trains need to go to coloured stations. You are in charge of building the track between stations (for which there is a grid but a lot of flexibility), changing the points, and dispatching the trains; you also have some basic control over each train including the ability to stop it and reverse it.

There are four seasons in the base game with this increased to five if you purchase the Germany DLC. Each season has six levels which will showcase different trains of the era and varied terrains in periods of time such as the Gold Rush or World War II. Time is constantly advancing as you play and new stations, tunnels, and blocking elements such as buildings will pop up around you.

The aim is simply to get to the end of the level (denoted by a particular year) but there are three additional challenges on all part the last level of each episode. The challenges can be anything from “don’t send any trains to the wrong stations” to “dispatch 10 additional trains” to “destroy over $50000 worth of buildings”. Every train has a cost amount floating above it which decreases the longer it takes for them to arrive at their destination. Crashing trains will cost you further and there is an annual taxation to account for. If you lose all of your money, you go bankrupt and the level ends. 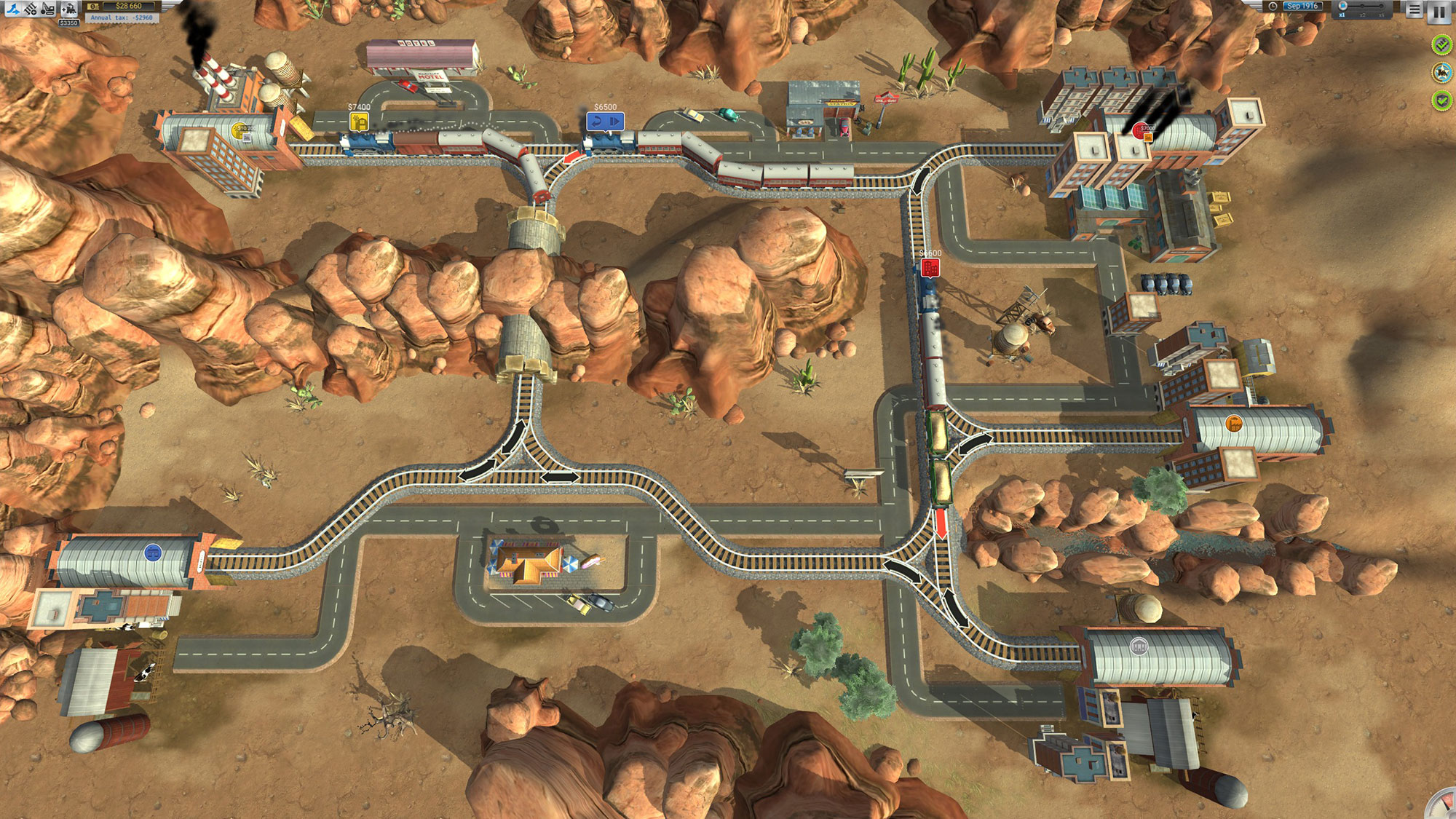 The game progresses on a nice difficulty curve with the first level acting as more of an interactive tutorial. From there, more complex layouts become necessary and you’ll need to carefully manage each train as it is likely you’ll be running multiple trains over the same pieces of track. There is a certain satisfaction in timing your trains to dispatch perfectly so that they’ll narrowly miss each other at your more complicated junctions.

New levels will introduce new trains with varying acceleration curves and maximum speeds. For example, in Japan you will occasionally dispatch a Shinkansen which takes a little while to build up speed but is ultimately much faster than everything else. You’ll also have slower freight trains with a long line of wagons to contend with making that careful timing all the more difficult. The tricky part is that you never know what train you are going to get until you dispatch it so you’ll sometimes need to stop a train almost as soon as it leaves the station if it turns out to be faster or longer than you expect.

Later levels also increase the difficulty by placing immovable terrain or prohibitively expensive buildings in the environment. With terrain, this is often tunnelled through at a later point in the level but buildings nearly always require a significant amount of cash to destroy; judging when is the right time to do that in order to keep your network efficient can be difficult. 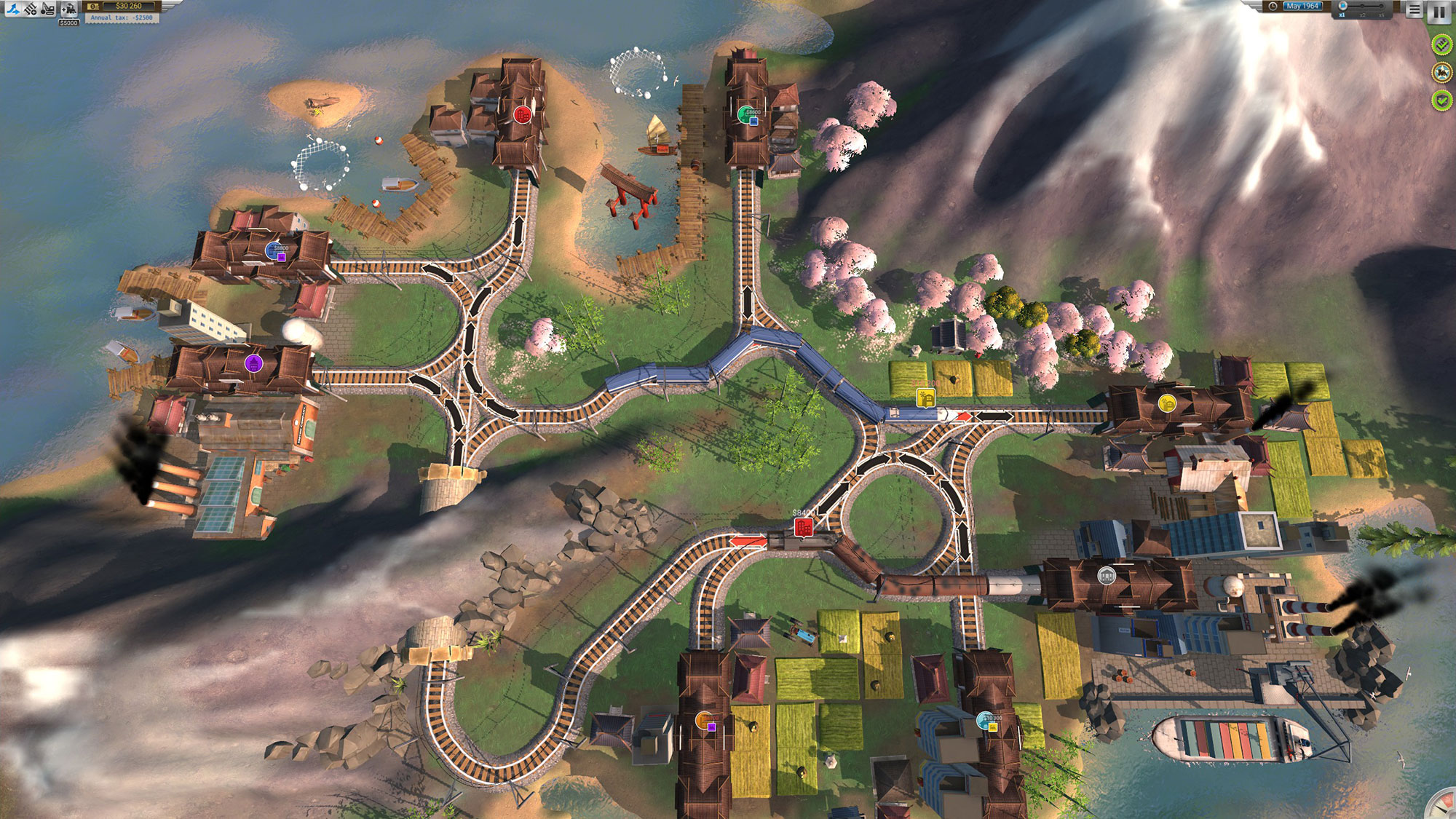 I played around 5-6 hours of Train Valley before I got to the end of the initial four episodes. As it had been on my wishlist yet I’d picked it up for free, I had no hesitation in purchasing the Germany DLC which adds an extra six levels within an episode mainly centred on World War II. There are additional challenges here in the form of the super train (which is huge and will destroy anything it crashes into) and bomber planes (that will blow up pieces of track that you may be using) along with six new types of train. It was a bargain at just £1.99 and I hope there will be more DLC episodes added in future.

There are several achievements that aid in the replayability of Train Valley including such things as having a near miss with two trains, completing a level at 4x speed, and completing a level with the first dispatched train arriving last. There are also 12 Steam Cards to collect which is more than I’ve seen in any other game. The soundtrack is catchy (and available for purchase separately) whilst the sound effects fit nicely into the theme with different horns for each train as you dispatch them.

There wasn’t much I didn’t like about the game but the randomness of levels can cause problems. Nearly every level will have a random placement for its initial stations and later emerging stations, the dispatch station for the trains, and the cost of each train; this means that some levels will lead to almost instant bankruptcy (especially in Japan) as you’ll need to destroy buildings to link your stations and then the cost of the train isn’t great enough to pay the annual tax. This didn’t happen very often but it was frustrating when it occurred.

The only other issue was with the zoom feature that allows you to scroll with the mouse wheel to both zoom in and lower the camera angle; this was very juddery as you go through increments rather than a smooth animation and I also didn’t see the necessity for it as you can’t realistically manage your layout when zoomed. It may exist just so you can look at the trains but it would have been better to have smoothed out the transition. 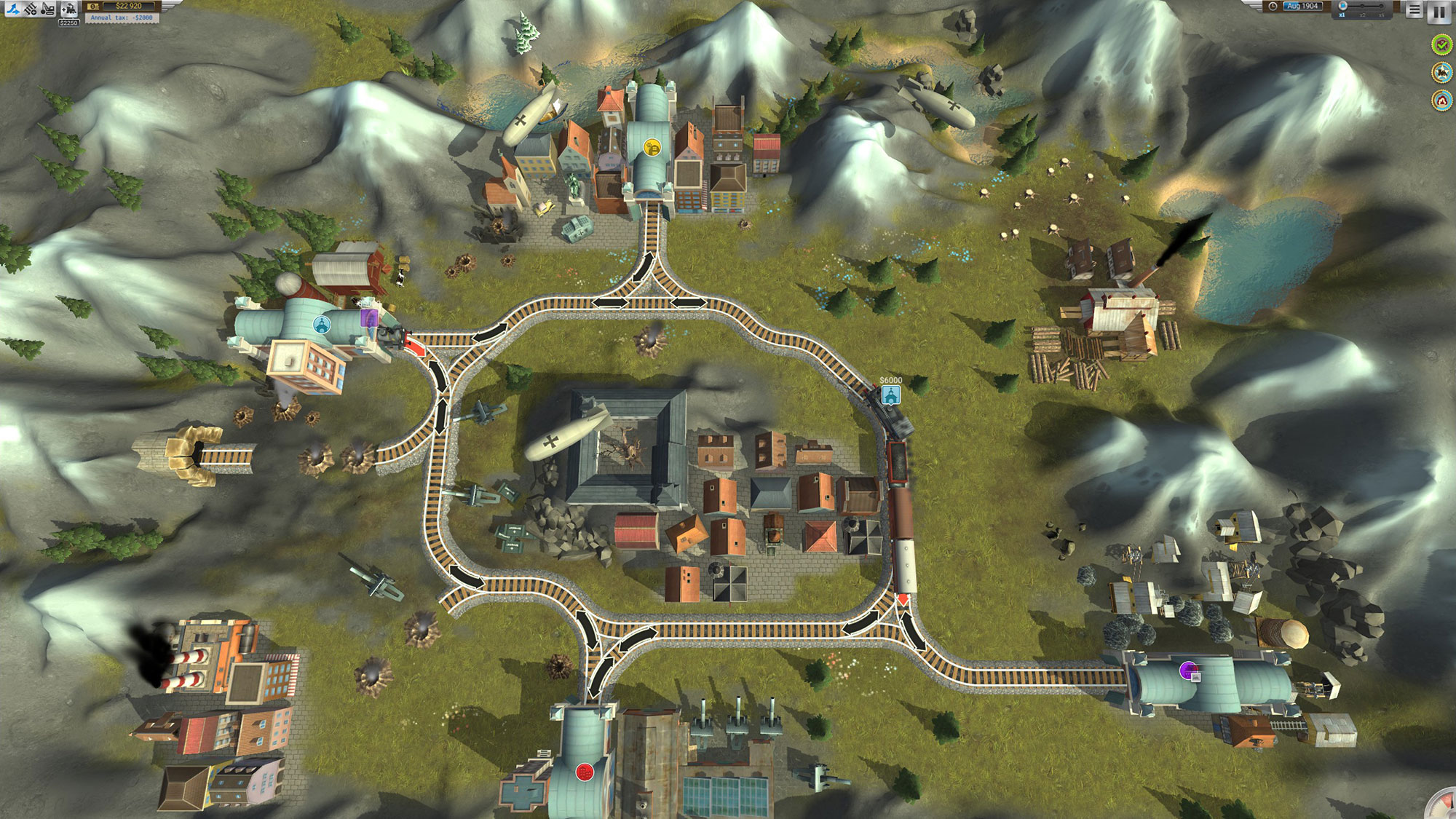 The final thing to mention is something I alluded to earlier; its eerie similarity to Rails (itself an official remake of Shortline Railroad). Train Valley was released almost 2 years later so it seems fair to call it out as a clone as the basic premise is almost identical. That said, there are a number of differences that make Train Valley feel more realistic due to its lack of power ups and the avoidance of bomb trains, pump trolleys, and vigilante trains. In Train Valley you can stop trains (with a pleasing squeal of the brakes and a deceleration) whereas Rails used a mechanic of signalling to effectively isolate trains in aspects of the layout. I do prefer the design aesthetic of Rails but then it is more of a 2.5D game than the full 3D modelling of Train Valley. In essence, they are incredibly similar games but more suited to their specific platforms; you can enjoy both equally.

Train Valley was an unexpectedly big hit with me. I love trains and these types of games but I had assumed incorrectly that it would be a fun distraction for an hour or two; in total I’ve played it for over seven hours and nearly all of that within the same week that I bought Dishonored 2! If I didn’t have such a large backlog of games, I’d certainly go back and mop up some of the achievements and challenges but for now I think I’ll wait until some more DLC arrives at the station…