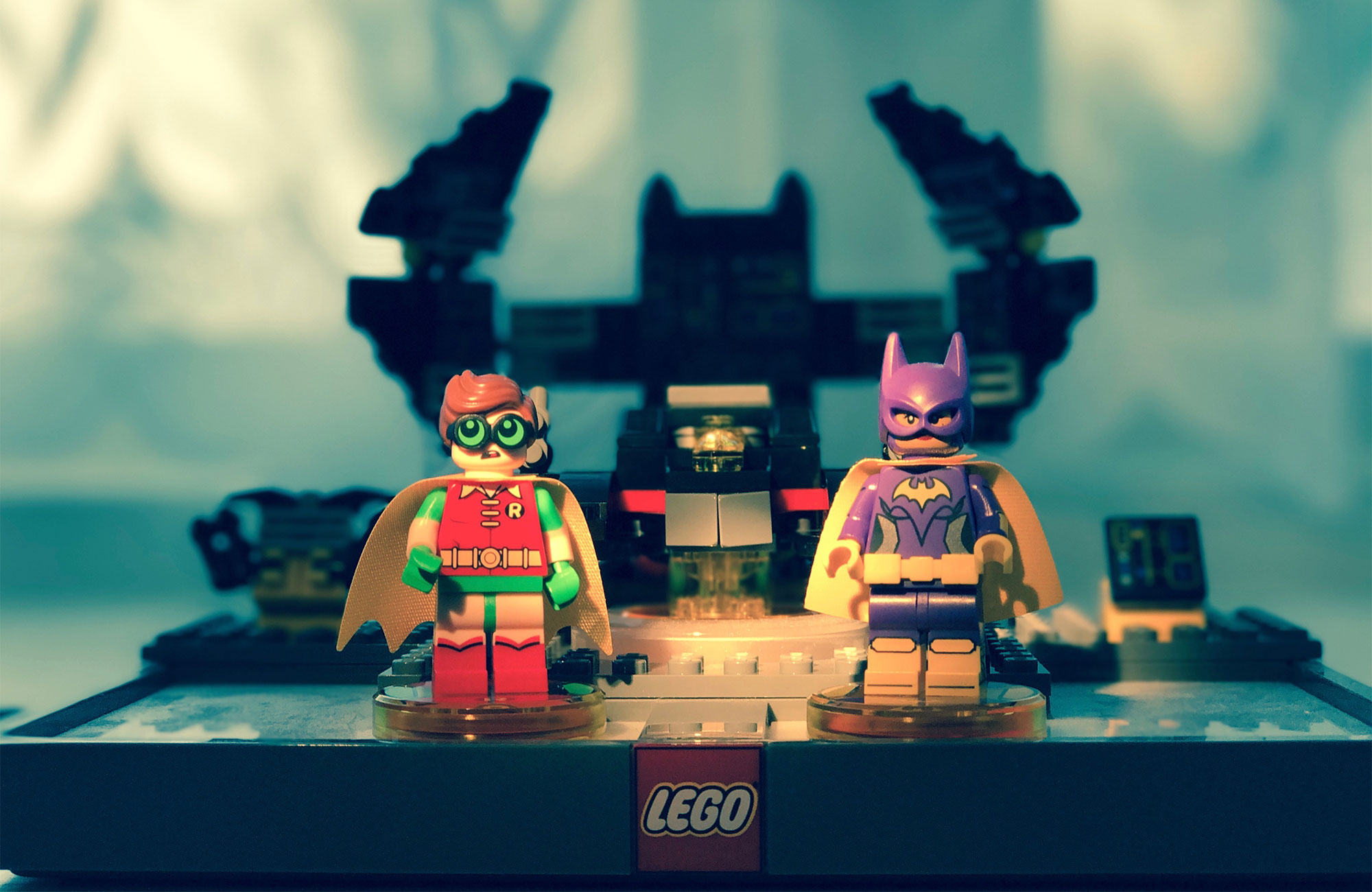 The Bat-Computer portal gateway is much smaller than the previous gateways and this is reflected in the part count: 156 pieces (including minifigures) compared to around 260 pieces within the Ghostbusters and Fantastic Beasts and Where to Find Them sets. To make up for this, the box proudly states that it includes a “bonus minifigure”; bearing in mind that gives you a playable character, it is probably worth the trade-off but it is a little disappointing that given the scale of the Batman property it has a less impressive backdrop than the Chinese restaurant from Ghostbusters!

The two included minifigures are Batgirl and Robin each of which gain unique abilities within the story pack; a detective mode and high security access for Batgirl and a special vent type that only Robin can interact with. Robin also has the ability to RRRRIP! his outfit off changing him into Nightwing which grants him the pole vault and laser deflector abilities. Interestingly, you actually need to have the Batman minifigure from the LEGO Dimensions starter pack in order to play the game and he’ll appear in the story pack as his LEGO Movie and LEGO Batman Movie version (all in black) rather than the DC Comics version (in dark grey) reflected by the minifigure. The Batman figure has also gained the new detective mode ability within the game as well as a fun merch cannon that lets him shoot Batman themed apparel at enemies. Annoyingly, Batman is still limited to being the DC Comics version in any worlds that aren’t the LEGO Batman Movie or the LEGO Movie with no ability to change it in a way similar to characters like The Doctor, B.A. Baracus, Abby Yates, etc. (UPDATE: Turns out that the red brick in the LEGO Batman Movie world allows you to play as LEGO Batman rather than DC Batman in all worlds and levels)

In addition to the figures, you also get the Batwing vehicle which is built within a few minutes of starting the game; it can fly, shoot, and do cargo pickups but there isn’t anything particularly unique about it in relation to other vehicles in the game. Later on, you can upgrade it to The Black Thunder and Bat-Tank which both convert it into a land-based vehicle although this rebuild is not required at any point within the story pack. 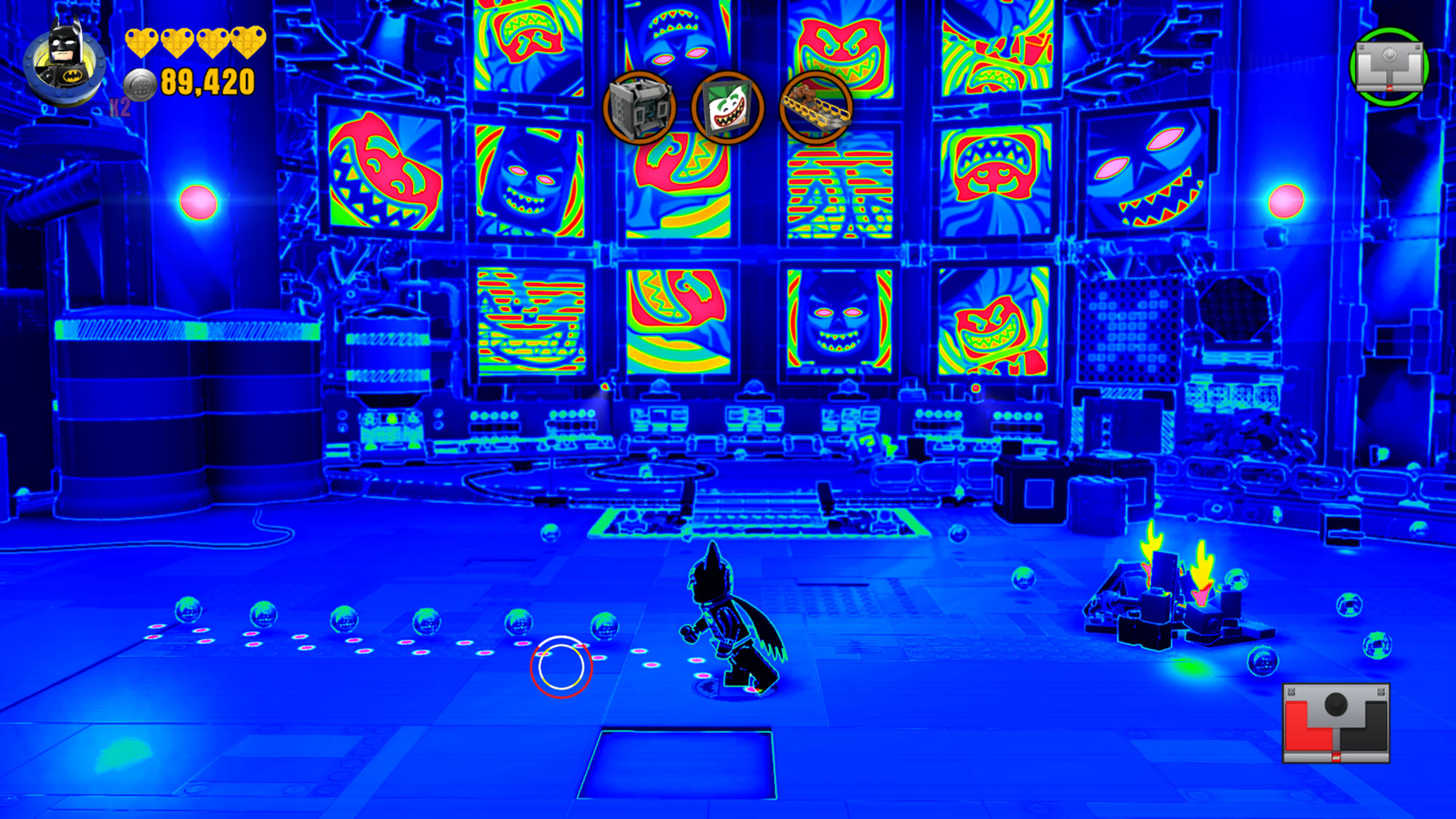 The new ‘Detective Mode’ ability for Batman and Batgirl

Before I get to the story pack levels themselves, I should point out my biggest disappointment which was apparent as soon as I placed the minifigures on the toypad; Robin is not voiced by Michael Cera as he is in the film. I wrote about the trouble with voice acting a few days ago but it is a real shame they weren’t able to get the correct voice as Robin is undoubtedly the best character in the film. This extends further to Alfred (not Ralph Fiennes), Phyllis (not Ellie Kemper), and the Bat-Computer (not Siri) although Batman (Will Arnett), Batgirl (Rosario Dawson), and The Joker (Zach Galifianakis) are all voiced correctly and have newly recorded lines rather than clips from the film audio. 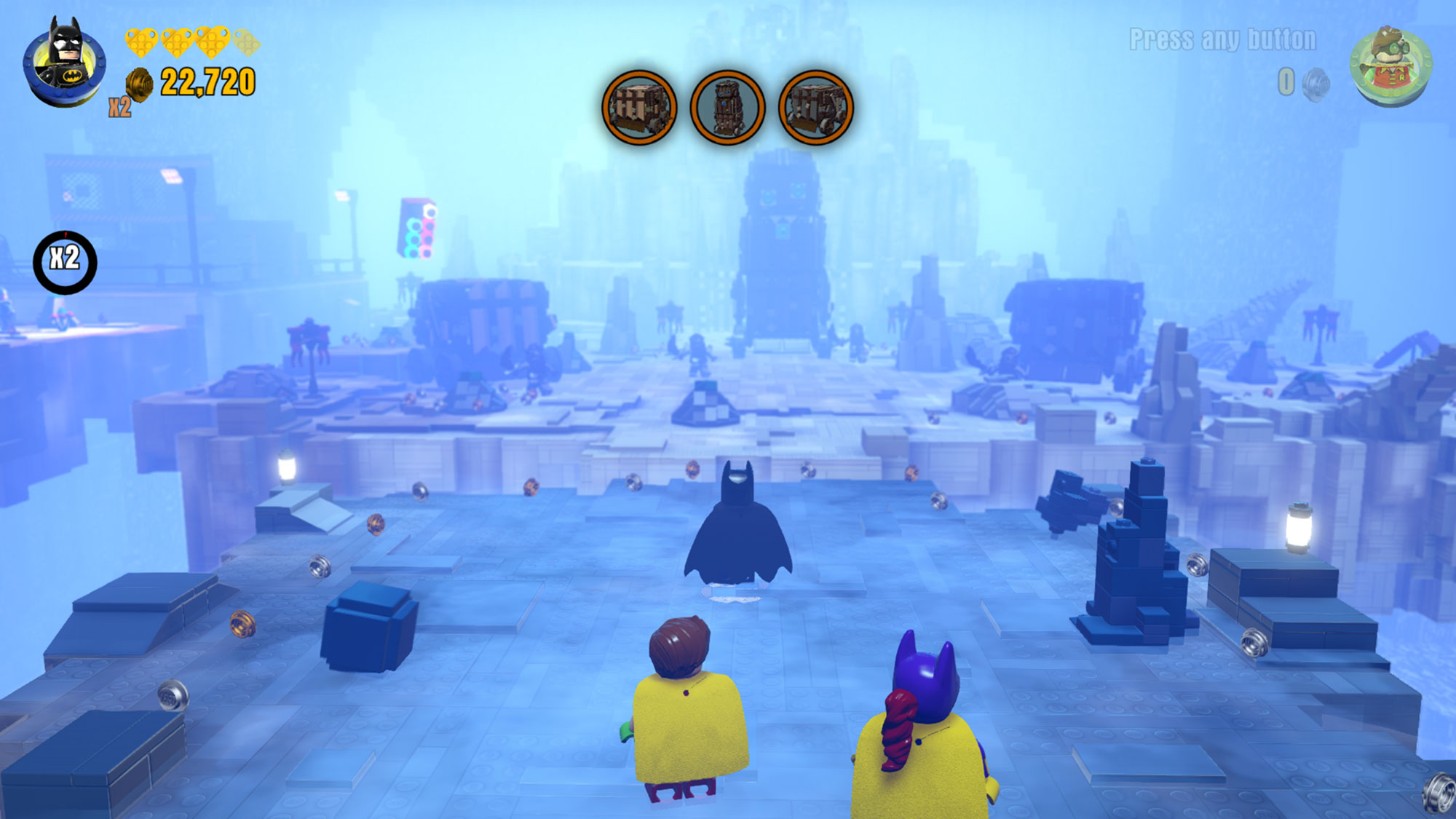 Once you’ve downloaded the requisite 2GB patch, you can start the story pack which closely follows the film over the course of six levels with the last three levels being based on the last 20 minutes or so of the movie. The levels follow the same patterns as every other LEGO Dimensions level in that you’ll need to collect studs and progress through the level by using your abilities to build and solve puzzles. Some levels contain a boss fight at the end and these are the same easy affairs as before whereby you’ll jump around for a bit, then something will happen to let you hit the enemy; do this three times and they are vanquished. 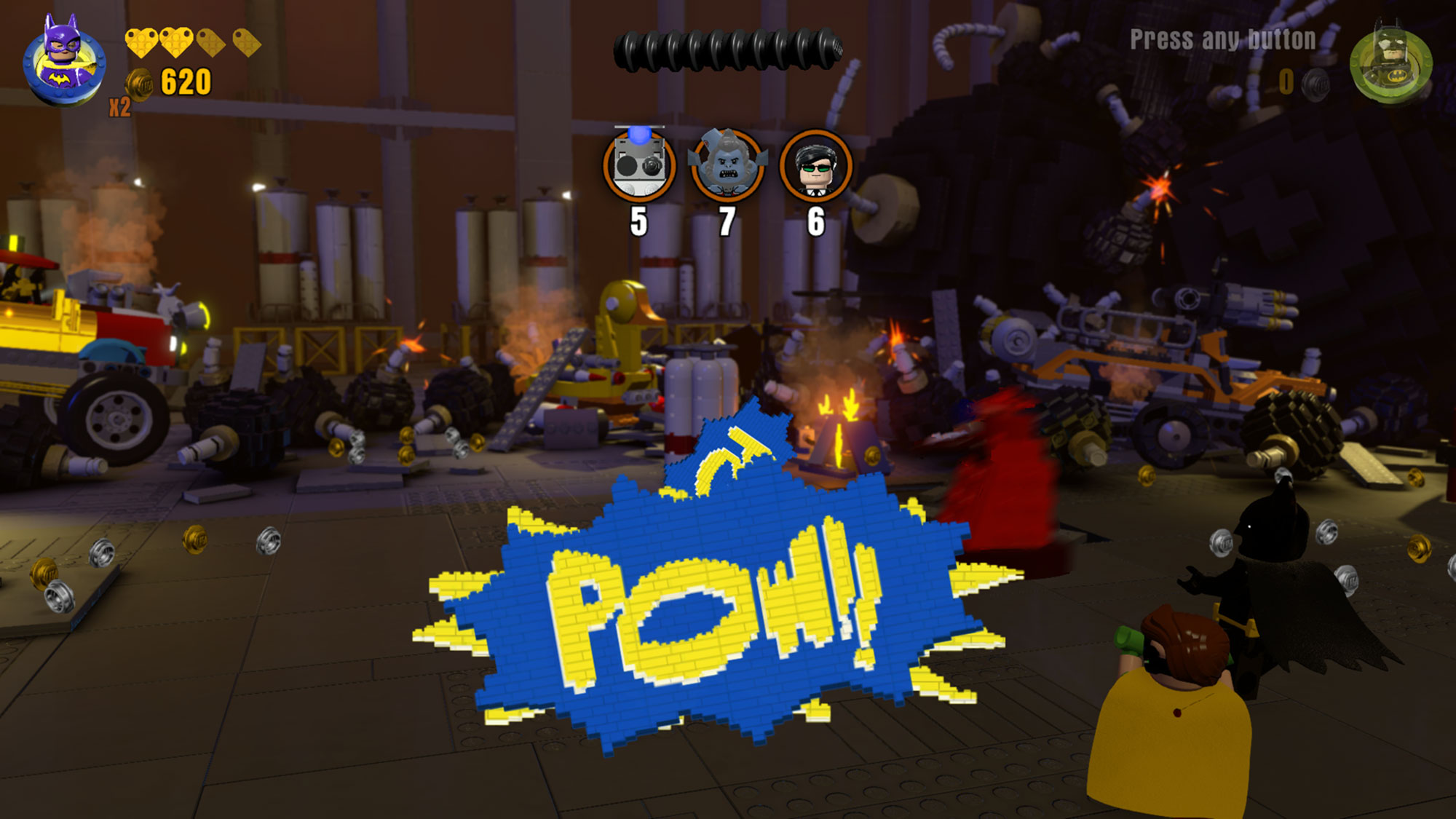 What makes this pack different to others are the small but notable pieces that have been added. First up is the Phase Keystone which will light up the gamepad and let you bring in entire puzzle elements from previous game properties depending on which pad your character is placed on. It is fairly similar to the Locate Keystone but it will actually deposit a full build that you can then interact with. For example, in one section placing a character on the left hand side pad will drop a huge Portal 2 section into the level with a laser puzzle you have to solve; only characters who are on the same pad can interact with it so sometimes you need to do some juggling. It isn’t a huge innovation, but it is good to see a new Keystone being introduced with each story pack although I don’t believe there were any references back to the LEGO Dimensions storyline as there were in the Sonic the Hedgehog level).

In terms of new abilities, Robin’s vent access is particularly fun due to the way in which you control him through the vent shaft with him flopping along like a fish or using exaggerated movements to scale upwards. There is also some difficulty with live electrical wires or broken pipes shooting steam or fire to contend with meaning you need to carefully time your movements. Batgirl’s high security access is less impressive being a basic reskin of the BB-8 computer access from the LEGO Star Wars: The Force Awakens game but her new Detective Mode (shared with Batman) does have more to offer. It is fairly similar to the Tracking Mode (introduced with Shaggy and Scooby-Doo) aside from you have three different things to track depending on which part of the gamepad you use. One tracker will use infra-red to show up footprints on the floor whilst another might use soundwaves to pinpoint a particular noise. It is essentially more of the same but it allows for more interaction with the gamepad. 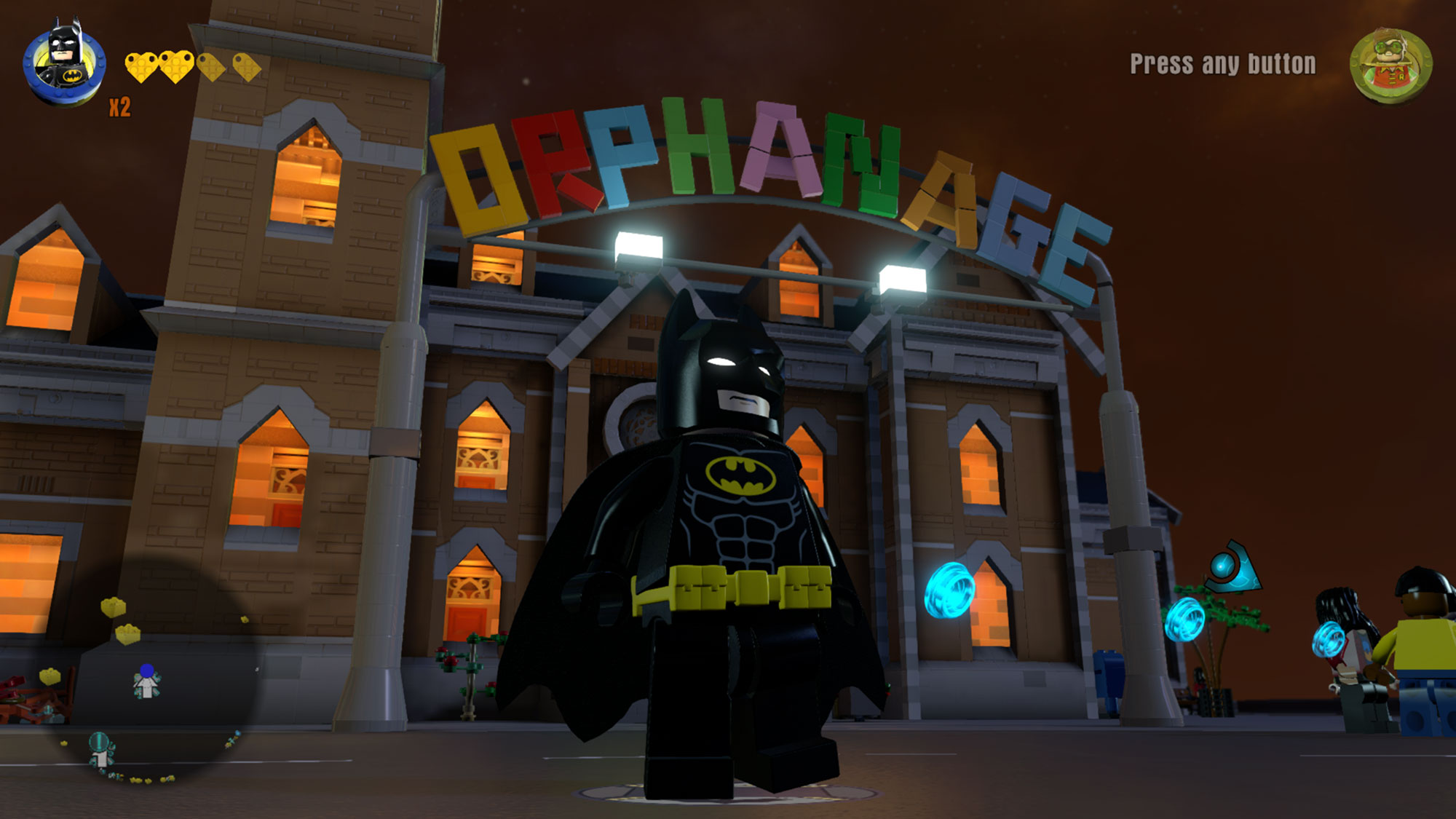 Each level of the story mode took around 45 minutes to complete and has the stud meter to fill out. There is also a person to rescue and ten Minikits to find in each level although you’ll typically need other LEGO Dimensions characters to find these such as Ethan Hunt or Doctor Who.

The final thing that is included with the story pack is access to the LEGO Batman Movie world (which can also be accessed with the Excalbur Batman fun pack but not with the regular Batman you get included as part of the starter kit). You’ll sometimes go to the world in-between story levels which I find a bit jarring and unnecessary but it serves to open up places where you can repeat each level easily. Within the world are the usual elements you expect such as puzzles, gold bricks, and a red brick; there are also quests with various familiar faces such as one where you need to help The Flash deliver ice cream to the residents of Gotham…

Overall, the LEGO Batman Movie story pack is a fine addition to the franchise with some interesting twists on the regular formula and two minifigures where you’d usually get one. However, the lack of good voice-acting for Robin, the underwhelming portal gateway and the slightly peculiar Batman minifigure requirement add a note of disappointment to what should have been an easy win for LEGO; that they can’t get the voice actors from their own films feels like the start of a worrying trend.