Ben says: "A clever idea in which an endless runner is flipped on its head with you moving the level rather than the character. The problem is that there is nothing to work towards unless you want to keep beating your personal best. Go and play Alto's Adventure instead."

I don’t tend to play many games on iOS but Stagehand (by developer Big Bucket) had an intriguiging premise that I had to try; it’s an endless runner platformer but the twist is that you move the stage rather than the character. 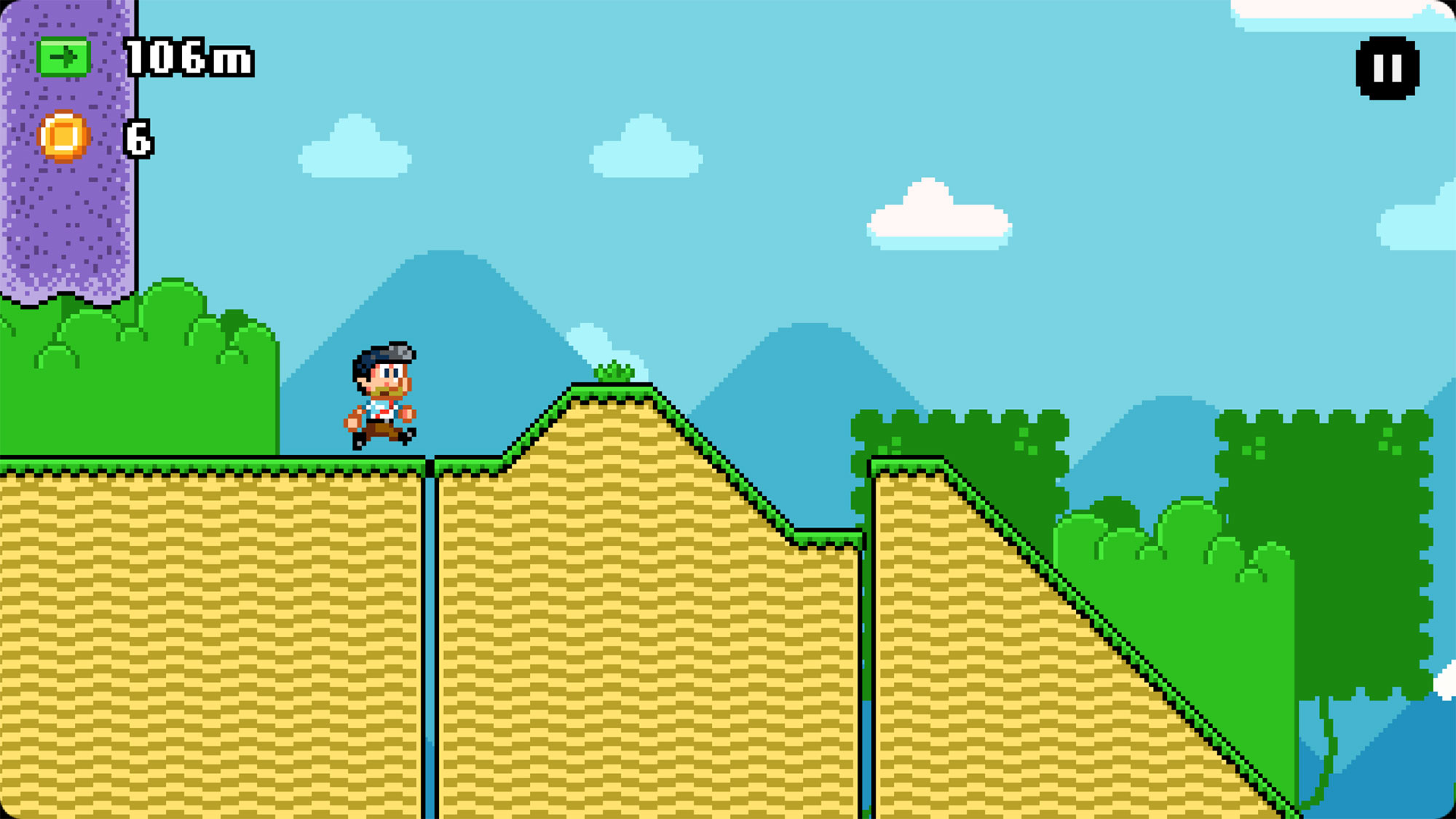 You play as Frank Solway (who you may recognise from Big Bucket’s first game, The Incident) and help him navigate the course by swiping up and down on each of the platforms as he continuously runs and jumps to the right. This is initially straightforward with only minor adjustments to the terrain required but later becomes much harder as immovable sections, lava pits, and spikes begin to make appearances. If he gets stuck, you’ll be pushed back towards the left and need to adjust quickly lest you be squished between the edge of the screen and the platform. Fortunately there are treadmill belts that will help you regain any lost ground by pushing you a little further to the right allowing a bit more time if you make a mistake.

Whilst each run follows a familiar pattern (green area, purple area with fire bits, dark area with spikes, etc) the levels are all procedurally generated so you can’t simply learn what sections are coming up. In terms of longevity, I think it would have been good to have had some hand-crafted fixed-length levels of varying difficulties as it feels fairly repetitive just trying to beat your previous score which will inevitably have a large amount to do with the luck of the randomness. 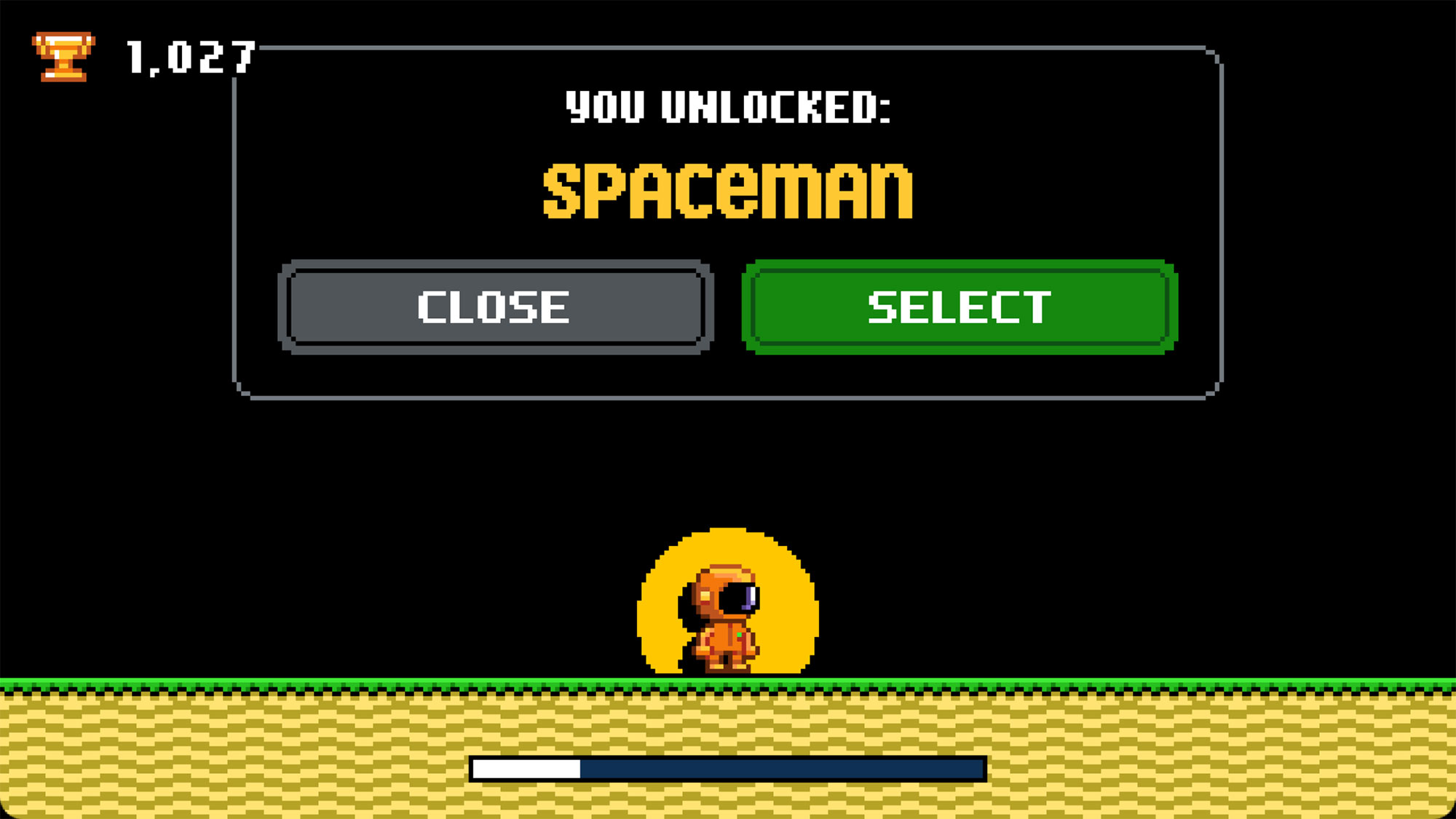 One slight variation to the endless runner theme is that your end score isn’t based solely on distance travelled but also on the number of coins you have managed to pick up along the way. I was expecting there to be some way to spend those coins but they don’t actually accrue between sessions, they are purely added to your final score. There are three extra characters that are unlocked as you hit certain top score milestones but they don’t change the physics of the character or give them any abilities; they are purely cosmetic. This seems a shame when compared to outstanding games in this space such as Alto’s Adventure where there is plenty to spend collected coins on and differences in the multiple characters available.

In a similar vein, I was disappointed that there wasn’t more to drive my interest. The best games of this genre have tended to include a three challenge system whereby you have certain tasks to perform in a single run — i.e. “Collect 50 coins in a single run” — but that whole piece of re-engagement is missing from Stagehand. There is integration with Apple’s Game Center platform but it only extends to the most basic of leaderboards, not achievements.

Whilst Big Bucket’s previous two games have migrated to Mac and Apple TV, I feel that is unlikely with Stagehand given the precision required to move each platform; this would also prevent any sort of controller support which is a shame as I found it quite uncomfortable to play on the iPhone for more than 10 minutes or so.

On the positive side, what Stagehand does do it does incredibly well. There has clearly been a lot of attention to detail with an incredibly responsive swipe mechanic that locks to fixed increments when released. Whilst I ended up playing more on the iPad Pro (as it was much easier on the bigger screen), I appreciated the integration with the Taptic Engine in the iPhone 7-series that added a little extra feedback to my run. In keeping with many other recent games, there is an iMessage sticker pack bundled with the game featuring the character, some game components, and a pixel-art hand. I was expecting an 8-bit style soundtrack to match the 16-bit aesthetic and was pleasantly surprised by the catchy multi-instrument background music which kept me humming long after I’d stopped playing. The best feature, though, is the inclusion of an instant replay gif which shows your last few seconds on each run and can easily be shared.

I played Stagehand for around 2 hours and feel that I’ve probably had my fill unless there is additional content added at a later date. I really like the premise of a “reverse platformer” but there simply isn’t enough content to keep me coming back when it is stood next to Tiny Wings, Alto’s Adventure, and Super Mario Run. This endless runner has a limited lifespan if there isn’t anything worth running for.