Ben says: "I would say this was my favourite game of 2017 alongside Hollow Knight. A simply perfect exploratory adventure about how people outgrow their hometowns. I loved it so much I bought it again on the Switch so I can give it another playthrough with the recently released "Director's Cut" that added more content. Simply wonderful."

Night in the Woods is a long-awaited Kickstarter-backed adventure game set in a rich world full of characters, minigames, and mystery. You play as Mae, a college dropout in her 20s returning home after 2 years and finding that the town and her friends have grown and things aren’t the same as they were. As she battles with her own existential crisis, a deeper problem is emerging in the woods that threatens to destroy the fragile world she is trying to hold together.

Did I mention that Mae is a cat? 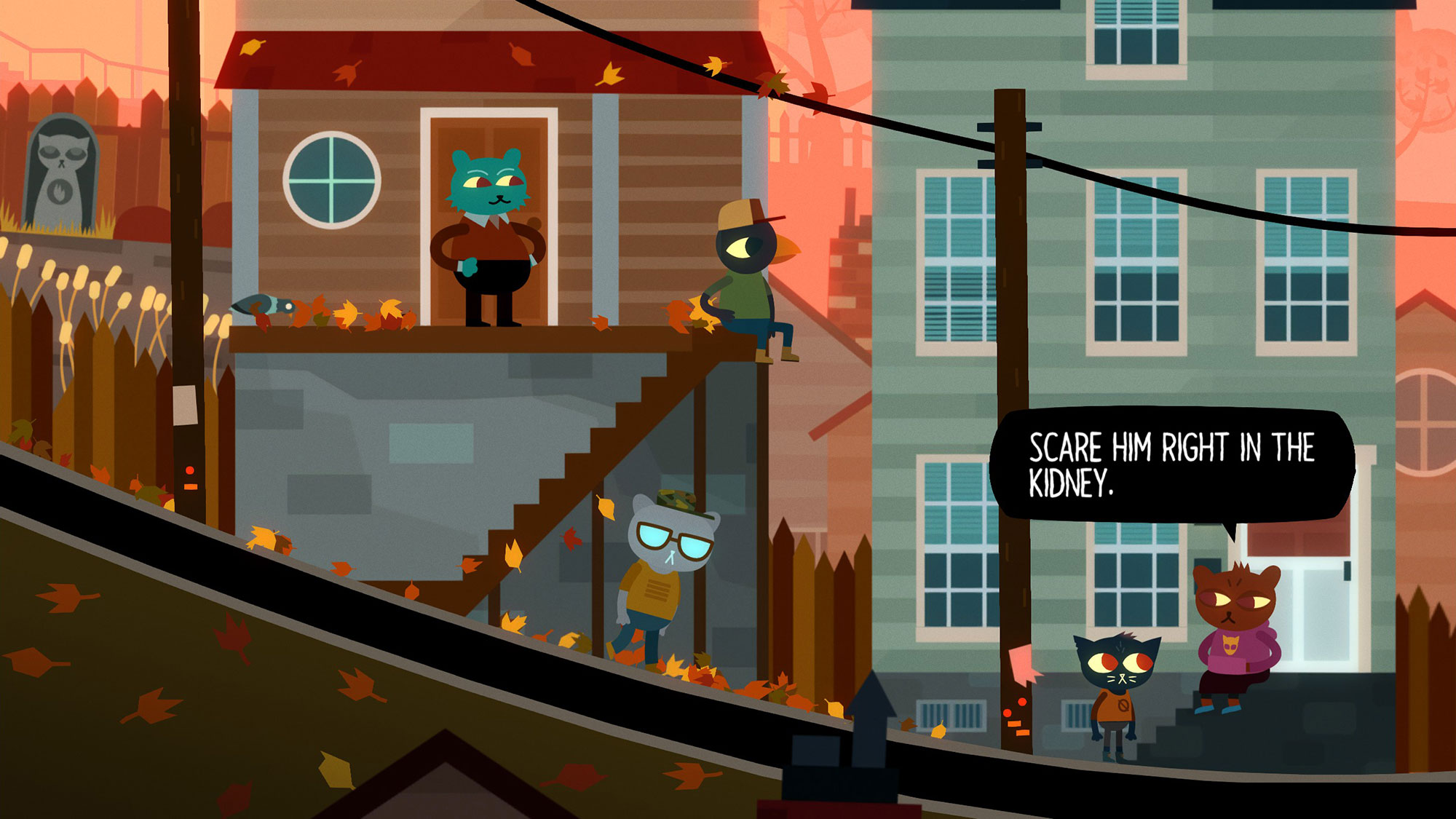 Before I go much further, it is important to explain what kind of anthropomorphic adventure this is. The game itself has overtures of Oxenfree, Kentucky Route Zero, and Firewatch with almost Nintendo-like minigames and puzzles thrown in to break up the main experience. There are all kinds of bizarre minigames from poking a dismembered arm with a stick, engaging in a knife fight, smashing fluorescent light tubes with a bat, or building a freaky pig robot out of metal rods, knifes, and a car battery. There are also more traditional distractions such as a rhythm game (as you play bass guitar in your band) and an entire 8-bit dungeon crawler adventure in the form of “Demontower”, a full game available on Mae’s laptop. That is to mention nothing of the unsettling dream sequences you’ll frequent that have you searching for different musical instruments and their players. All of this combines to keep you on your toes as you never know what you’ll be interacting with or engaging in from one moment to the next. 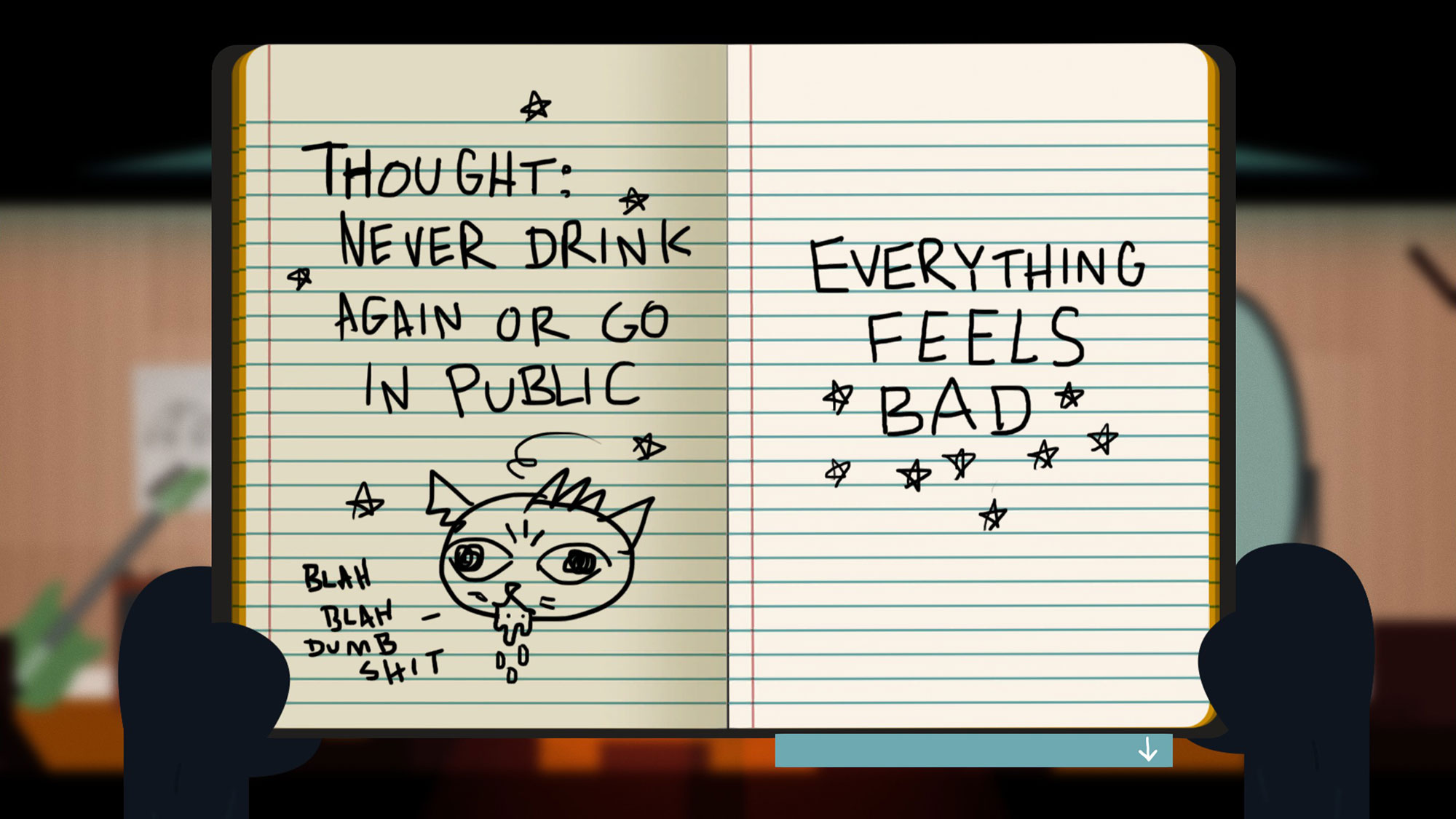 Whilst these distractions are fun, the real soul of the game is in the expertly written dialogue and characters. I don’t think I’ve played a game in a long time that made me care so much about its protagonists or that could make them so desperately relateable despite their outward appearances. In many ways it reminds me of the Netflix series BoJack Horseman, not just because of the animal-based world but because you don’t expect cartoon animals to be able to make you both laugh and cry in equal measure. There is a true mastery of text in this game that just has to be experienced be it the arguments between family members, the casual absurdness of adolescent life, or the simple bonding over traumatic pasts. I’m purposefully going to avoid talking about the main storyline as this is definitely a game where it is best to jump into with no preconceptions or idea as to what is going to happen (again, similar to Kentucky Route Zero).

Although you control Mae, you’ll typically spend your time with your three childhood friends; Gregg, Angus, and Bea. On most days, you’ll have the choice as to who you hang out with and that will dictate what minigames you play and the adventures you embark on. Whilst your choices don’t affect the ending (as far as I can tell), you will need to have multiple playthroughs to experience everything as you can only do so many things in a day before they are unavailable. Each of Mae’s friends has their own stories to tell and the longer you spend with each the more will be revealed about them. The writing in these interactions is completely on point and it really feels like you are witnessing conversations between 20-year olds. This extends to the online chat sessions you can initiate via your laptop which I did at the start and end of each day; you might discuss the days adventure, talk about a TV show, or just type apologies for whatever wrongness has occurred. 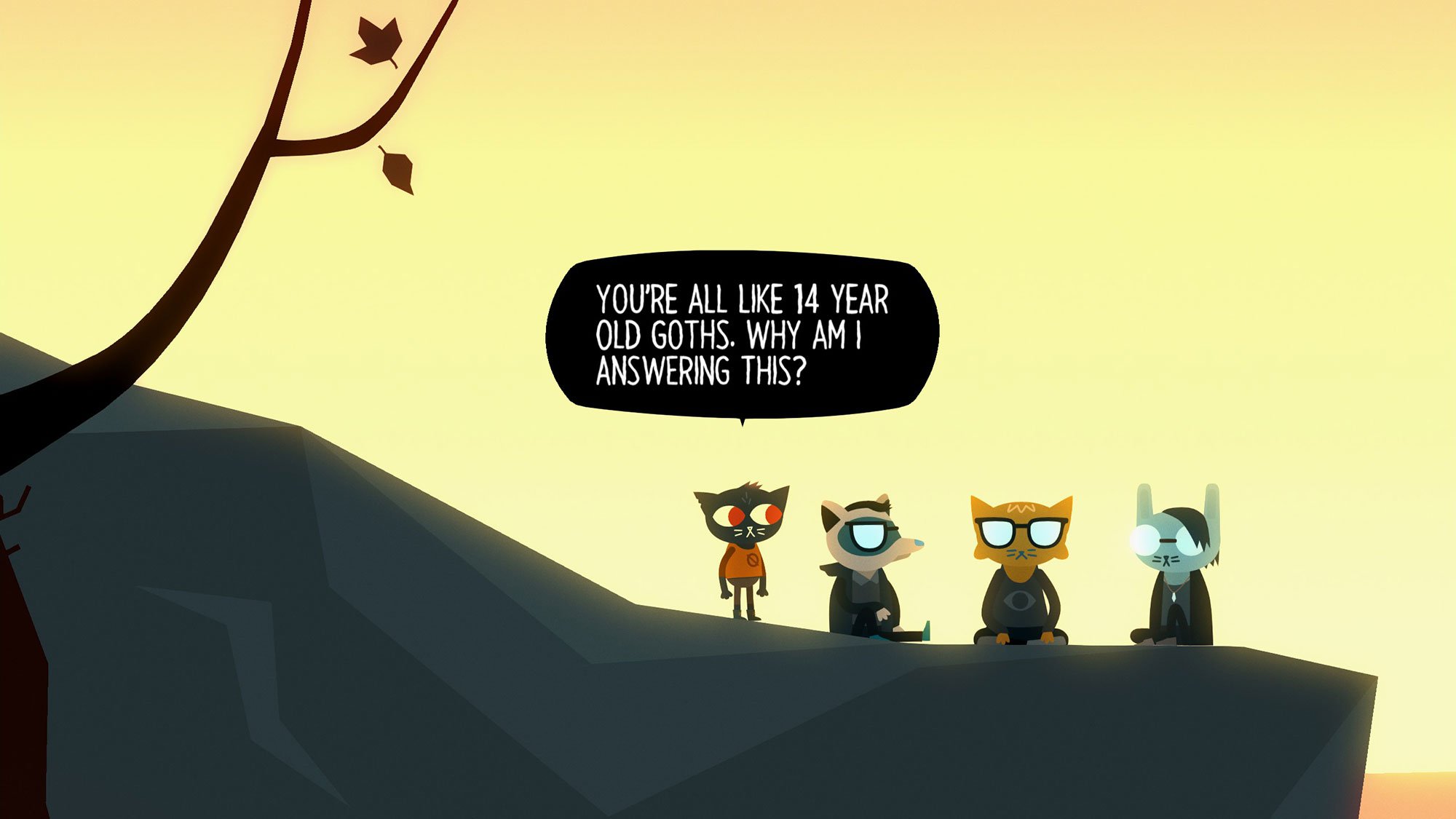 These interactions aren’t just limited to your friends though; nearly every character in the world can be interacted with to some degree with some offering a couple of sentences whilst others might engage you in lengthy dialogue. My favourite conversations were between Mae and her parents and with the goth kids that you may find who speak in a slightly unsettling sequence. These interactions help to solidify an already impressive feat of world building that contains lots of different locations to explore and a detail that is truly impressive from such a small development team. Just some of the details I enjoyed were the leaves kicking up as you run through them, a stream of background characters on foot, car, or mobility scooter, the ability to jump on mailboxes, fences, and telephone wires, and the fact that there were multiple places that you could completely miss. For example, there is a tunnel under one of the main streets that contains a pretzel stand and a canal; I went in and spoke with a few of the people but never went back again as part of the main story yet it added an extra depth to Mae’s character that I could easily have walked past.

The exploration is also deeper due to the way it evolves over time. The town is a living, breathing place and as the chapters unfold there will be buildings, scenery, and characters that alter or are no longer available. On the one hand you want to progress with the main story but on the other you want to explore every area to the maximum and engage in every piece of dialogue. I finished the game in around 6 hours but I probably could have taken several hours longer if I’d explored a bit more.

I’d be remiss if I didn’t also mention the beautiful sound design both in terms of background music but also in the incidental notes and sound effects that add to the rich environment. I particularly enjoyed a minigame in which you have to carry a heavy box up some stairs; each step triggered a tremolo note on the piano with the pitch dependent on how high you had climbed lending a silent movie style comedy to proceedings. The layering of instruments during the dream sequences is also sublime. I will be buying the soundtrack if they decide to sell it. 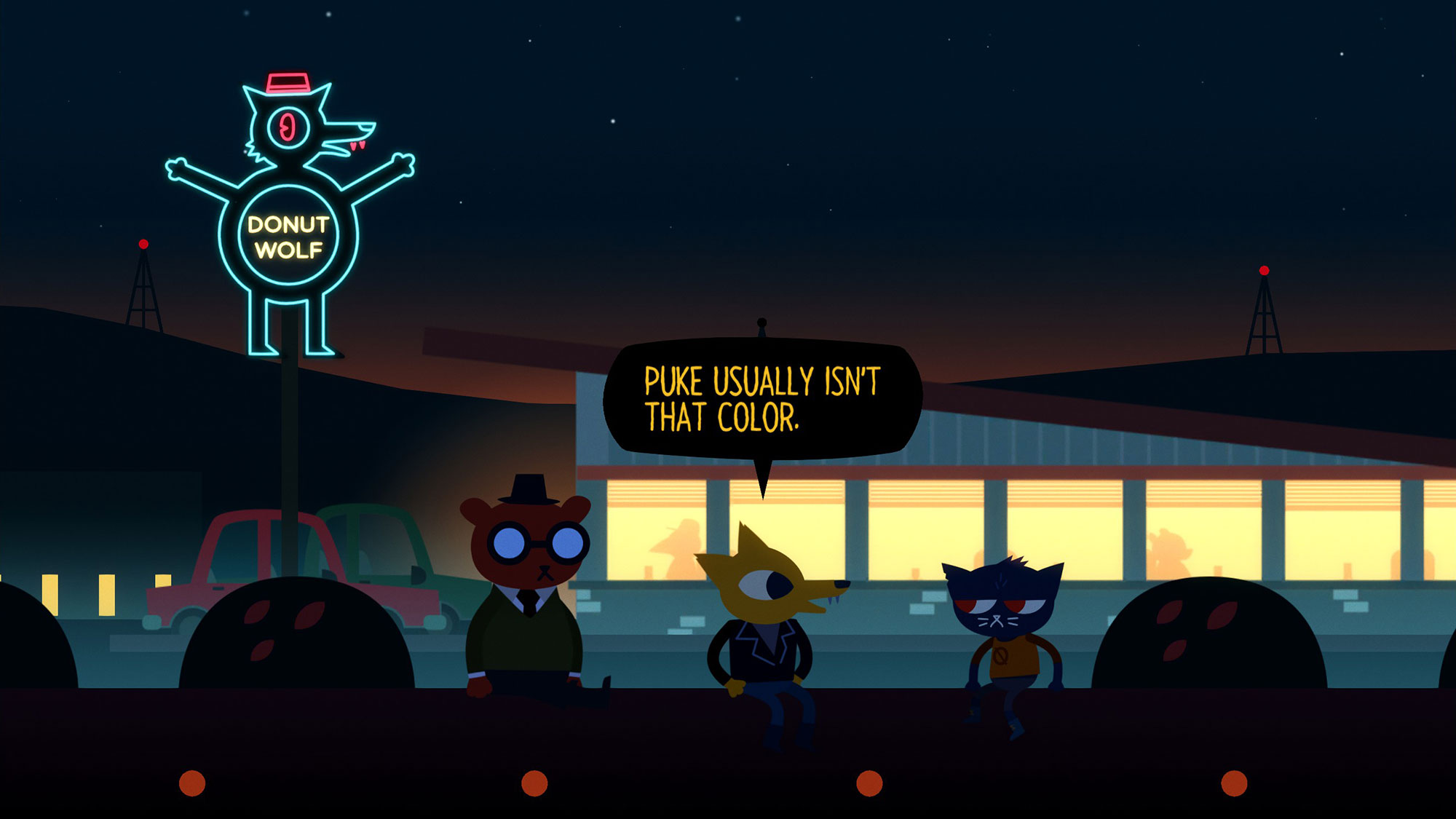 Whilst the gameplay and story are top notch, there were a few issues in the mechanics that rankled the experience. I saw a number of textures (mainly on interaction icons) that were very low resolution, there is no support for 21:9 monitors, and the achievements system on Steam was completely broken. I always think achievement hunting is a bit pointless in these games, especially as each one is marked as “secret” so you’d likely need a walkthrough to find all of them, but it was a shame that even the ones for completing a chapter didn’t unlock.

The other issue is one of save games and replayability. You get one save file which can be wiped from the options menu but it is written to automatically as you change scenes in the game; there is no way to go back to an earlier point of time and once the game is finished you can only replay the very last scene or start a new game. Orwell had the same problem and was recently patched so I’m hoping that at some point Night in the Woods will gain similar functionality. Whilst I’m eager to play through again, it would be nice to be able to try out different dialogue options or friends I’m going to hang out with and be able to backtrack a step or two if I wanted to try something different. 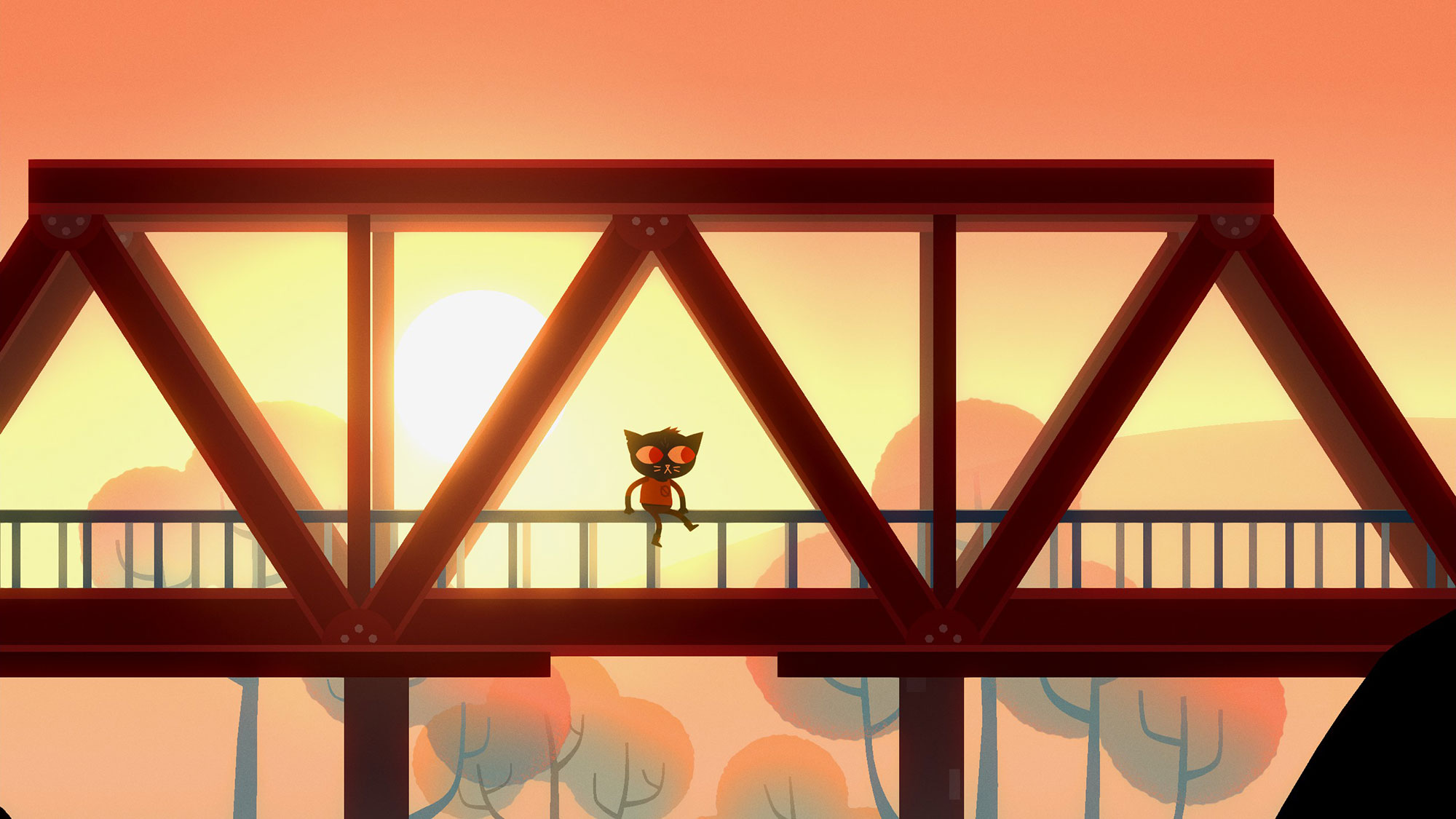 I intended for Night in the Woods to be a short diversion in the week whilst I waited for the release of Hollow Knight; instead, it has become my favourite game of the last 12 months and my favourite game of this genre, period. The writing would be enough to set it apart but the depth of the world, the mystery, and the utterly bizarre (and wonderful) minigames make this a masterpiece that should not be missed.