Ben says: "The best metroidvania you can buy and one of the best games I've played in a decade."

John says: "An amazing metroidvania in a stunning and beautiful hand-drawn world. Exploring the twisted caverns filled with bizzare bugs and ferocious foes is a delight and coupled with a good difficulty curve and challenging bosses, this game is a must play if you like the genre."

Hollow Knight is a metroidvania-style game with a gothic aesthetic that evokes memories of Don’t Starve, Child of Light, and Machinarium. I wrote an initial preview after playing a beta version but I have now completed the main portion of the game after almost 20 hours. 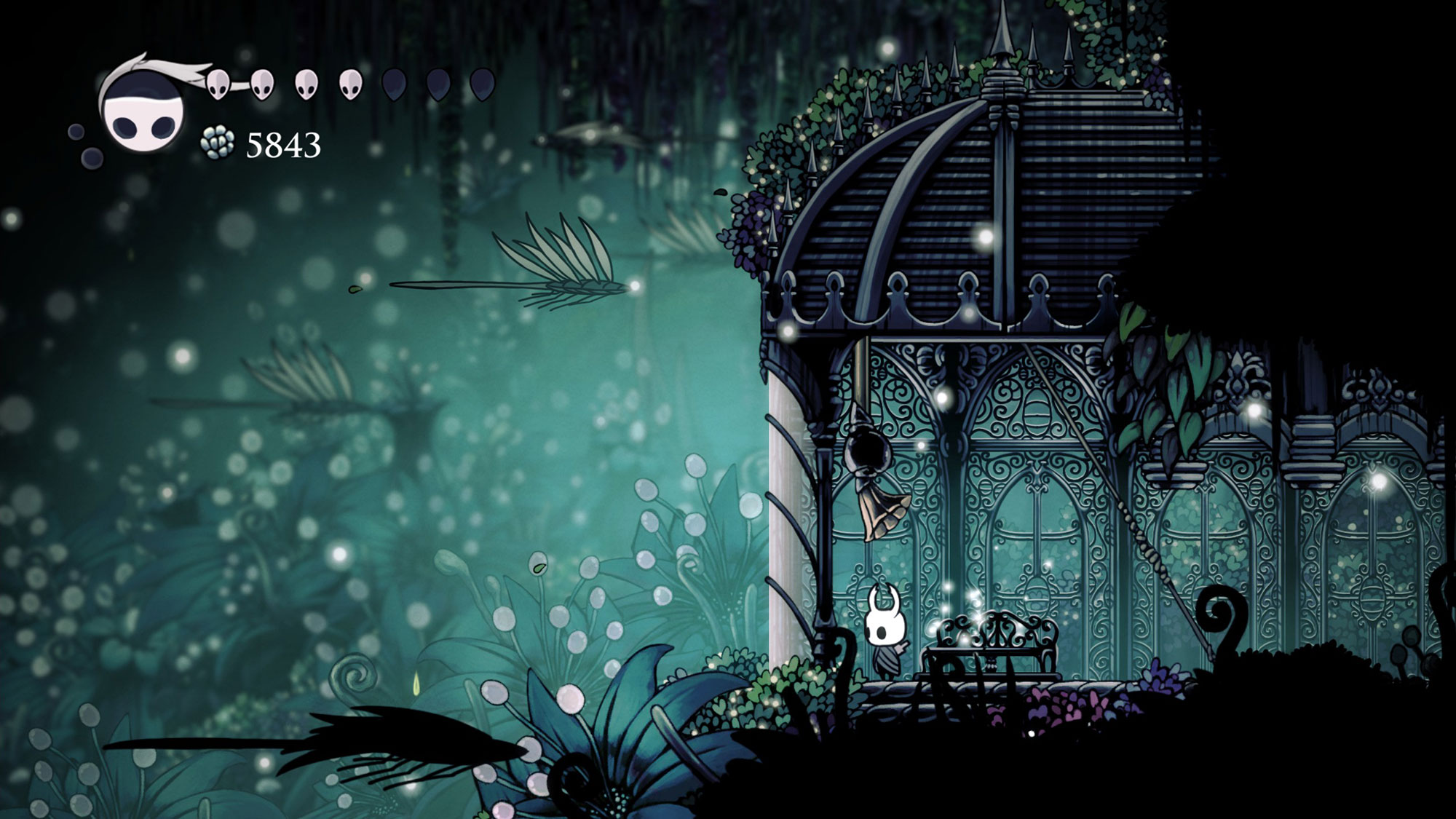 Before I get into the gameplay, I’m going to get my single dislike out of the way; the story. I had very little idea throughout what the actual motivation or story was beyond dungeoneering. There is a temple protected by three spirits that you need to vanquish before you can take on the Hollow Knight himself but I never really understood what he was or why I was fighting him. You can pick up little clues and obtuse texts that relate to the plot but it washed over me and I kept feeling like I’d missed a crucial cutscene or piece of information. That said, it never really detracted from the game as Hollow Knight is all about the exploration rather than exposition.

And boy is there a lot to explore! I was not prepared for how vast the labyrinth of Hallownest would be nor how varied its different areas. There are lush gardens, rocky peaks, crystal mines, acid lakes, and beautiful gothic spires. There is also a huge nest filled with creepy crawlies which did nothing for my delicate sensibilities (especially as your visibility is dramatically reduced). 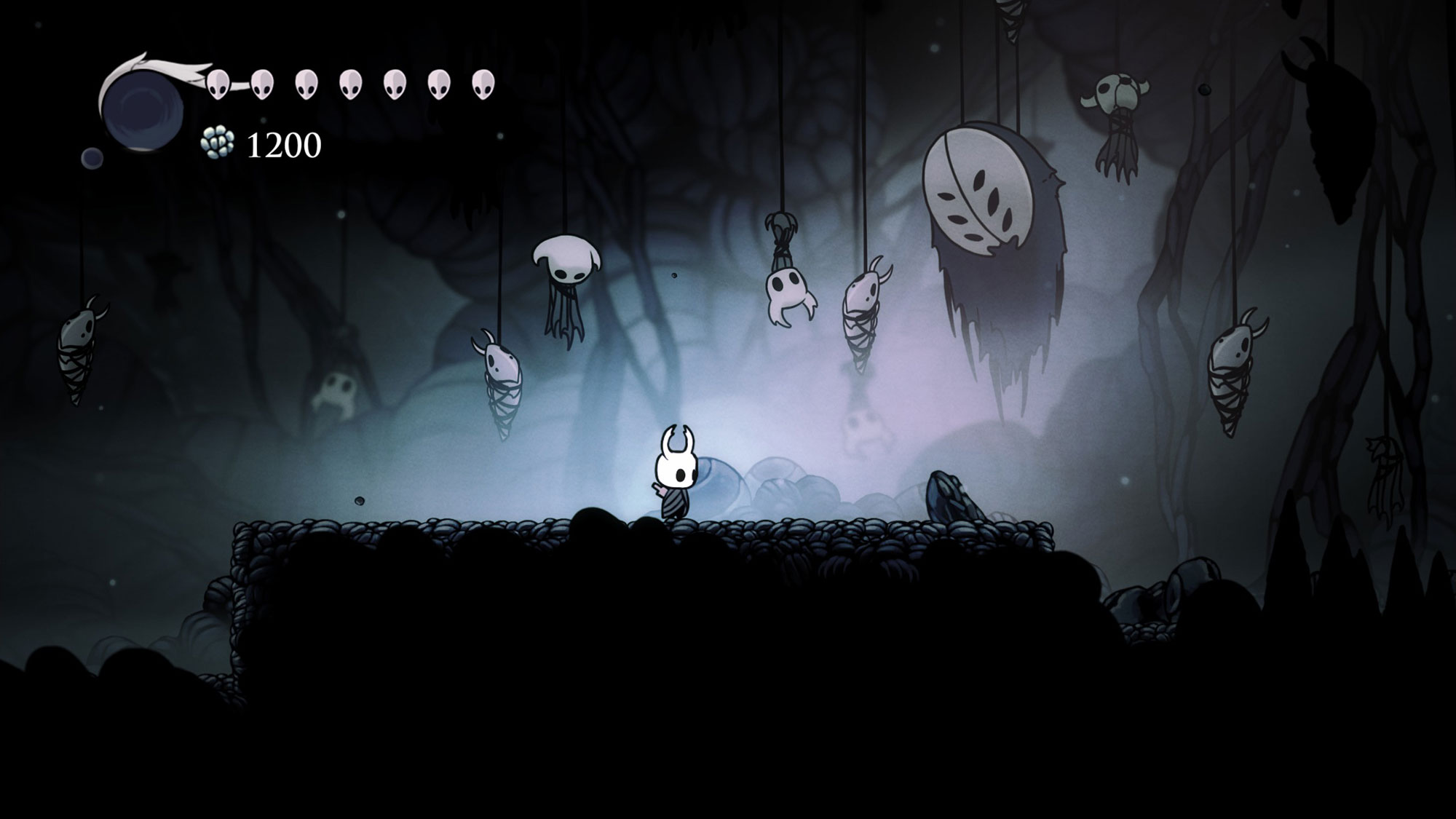 Well that isn’t disconcerting at all…

To help navigate, you are able to purchase maps of each area from Conifer the cartographer but you have to actually find him in each area first. You can purchase a quill for extending his limited maps as you explore (although these only get filled in when you rest on a bench) and a compass which pinpoints exactly where you are. There are also various pins available for purchase which highlight shops, fast travel points, and more.

Whilst the overall map is huge, you are initially limited in where you can go based on your abilities. As you play, you’ll unlock new abilities that give you new ways to explore further. For example, fairly early on you will find a Mantis Claw which allows you to scale walls unlocking previously inaccessible areas. There is no sign of how many abilities there are so each time you find a new one is a genuinely exciting moment followed by the daunting task of trying to backtrack to places where you think you can now make use of it.

Speaking of backtracking, it can be fairly arduous to navigate across the map and whilst there are fast travel points in the form of stag stations and trams, these are spaced out a bit too far apart in my opinion. 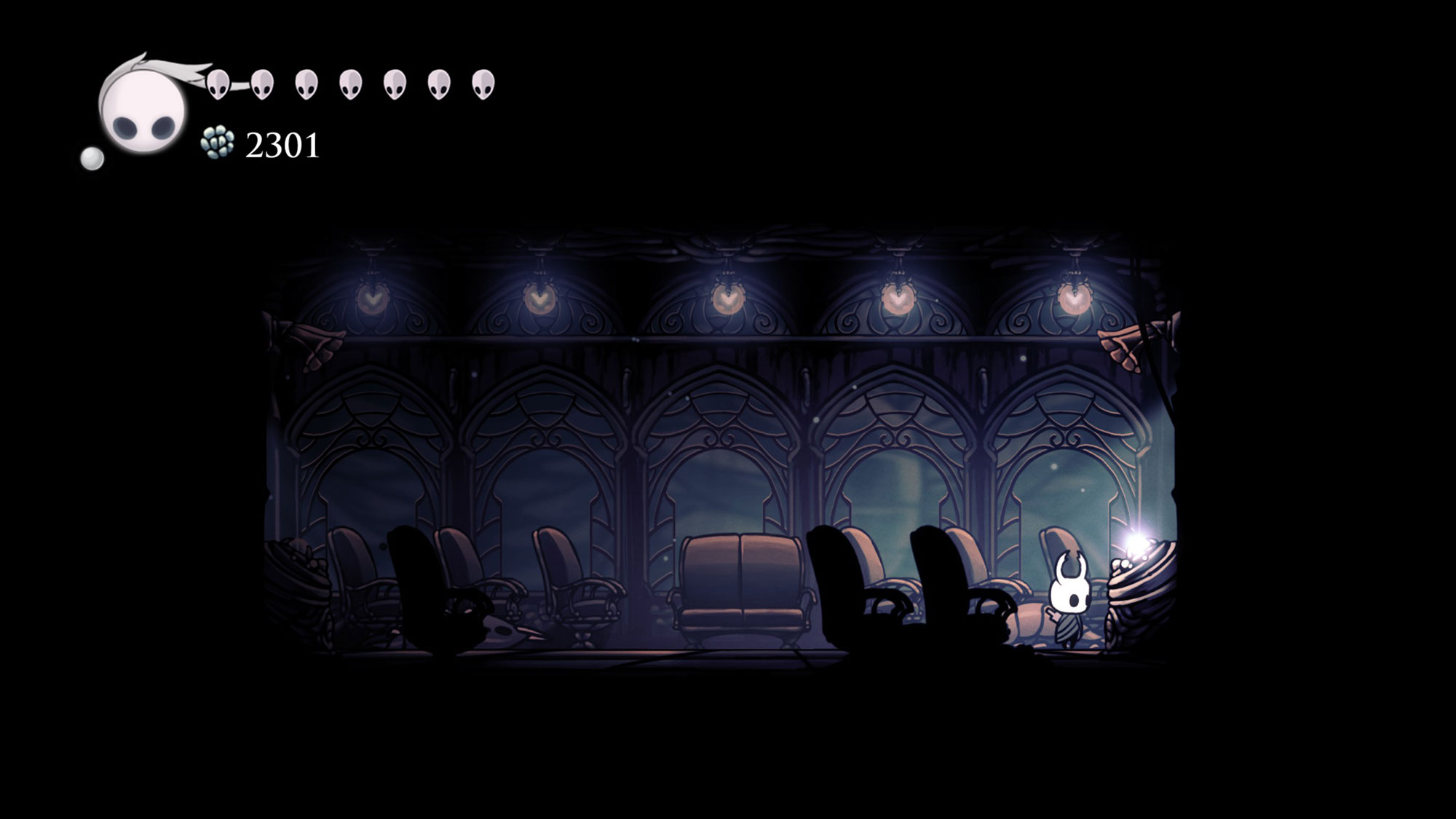 In addition to abilities, there are a whole host of upgrades and collectibles to find. There are shards and fragments to help you increase your total life and soul meters respectively and you can upgrade your sword at a specific shop if you have enough currency and some requisite rare items. New fighting techniques (such as a circular spin) can also be found by seeking out the old masters who are particularly tricky to find but they don’t make much of an improvement.

The main collectibles are charms which are a good way to add buffs to your character. You only have a certain number of slots available to you and you can only swap your active charms when you are resting on a bench so you have to choose carefully what upgrades you want. I nearly always used a compass (for seeing myself on the map), a charm that basically made currency magnetic to me, and a charm for extending the length of my sword making it slightly easier to hit enemies. There are 30 different charms available with varying powers and whilst some can be purchased, the majority need to be found.

Rounding out the collectibles are grubs, catapillar-like creatures in glass balls that cry when you are near them. If you release them, they’ll return to their nest and give you a reward (which is usually money but sometimes a charm or shard). 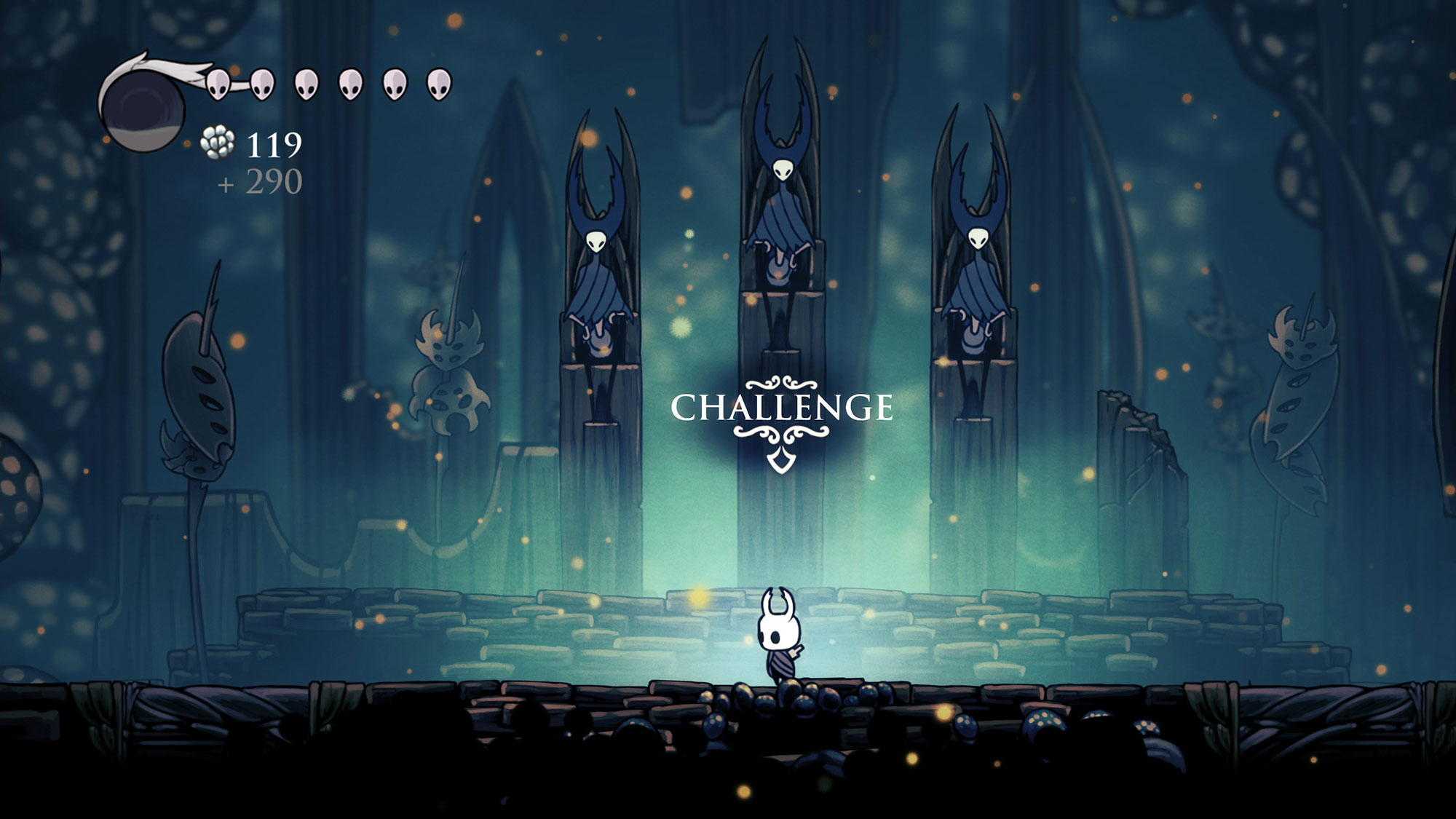 This boss fight was a real highlight for me

Aside from exploration, the other activity you’ll be engaging in is combat. Nearly every screen will have enemies of some type be they tiny flying insects that can be killed with a single hit or large soldier bugs that require a lot more work. There are over 130 unique enemy units each of which can be logged in a hunters journal with a special reward if you manage to collect all of them. I was massively impressed with the vast array of enemies and how they weren’t just minor reskins between areas but fully realised enemies with different attacks and movements. I didn’t find the combat to be too tricky although I focussed on upgrading my sword as often as possible.

Boss fights, however, are a very different beast. There are 30 different bosses in the game that each have a unique look and feel. They are nearly all exceptionally difficult to fight and you will likely end up dying several times before you decipher their movements and finally beat them. In some cases, you will need to go away and gain new abilities or upgrades before trying to tackle them again. I particularly enjoyed fighting the Mantis Lords due to a distinct increase in difficulty as you go from fighting one to fighting two at the same time. There was a distinct sense of satisfaction after beating each boss as they are genuinely difficult fights. It is worth pointing out that there is no difficulty setting so it isn’t possible to simply dial down the pressure.

As well as the boss fights, there is a colosseum later in the game that allows you to fight loads of different enemies at once in an arena setting with some rare items as rewards. I managed to complete the first trial but I need to improve significantly if I’m going to complete the other two. If that doesn’t sound difficult enough, Hollow Knight also has a Steel Soul mode (unlocked when you complete the game) that features no self-healing via soul power and permanent death. I don’t think I’d get very far! 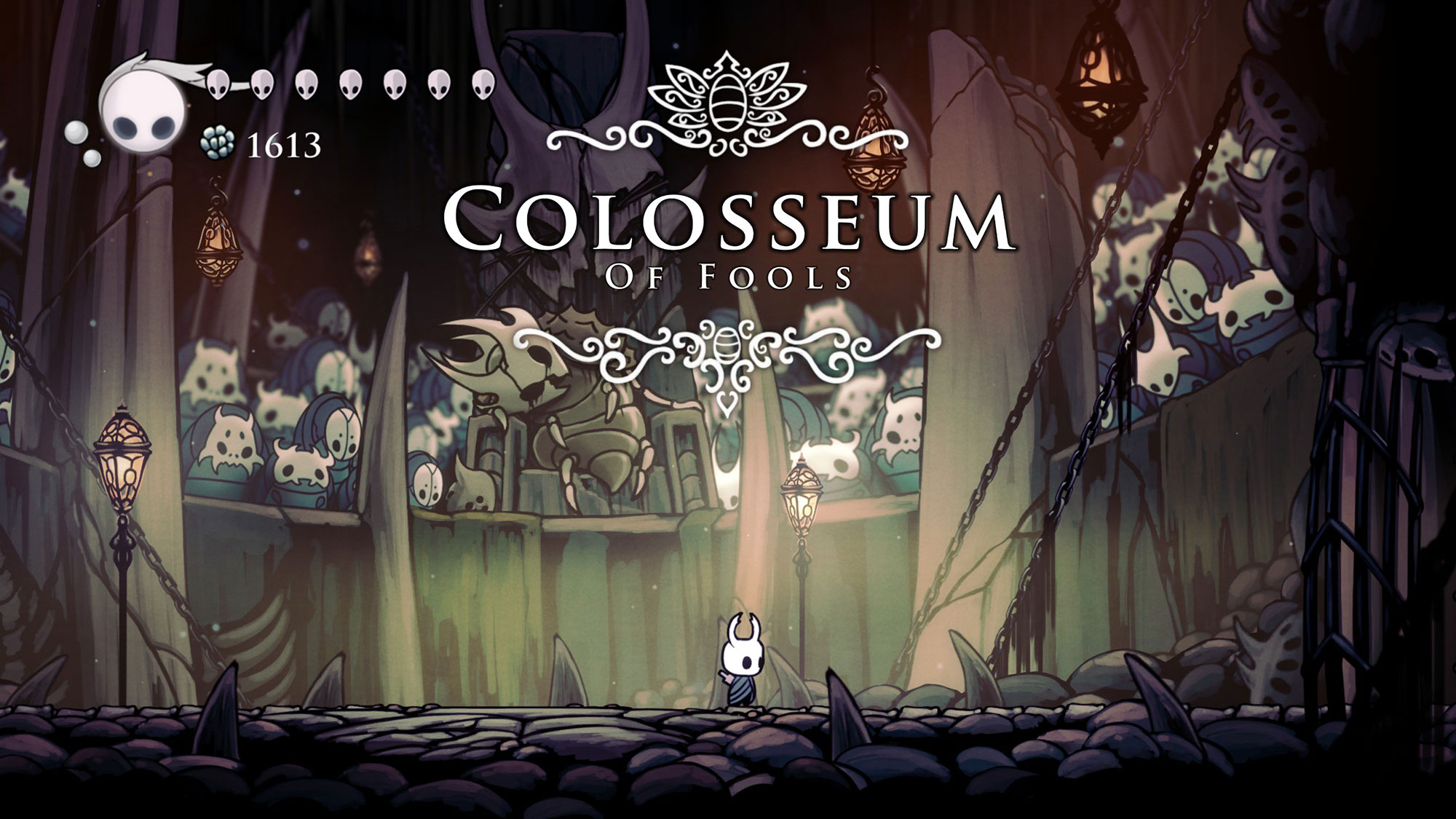 As you would expect, Hollow Knight features a number of achievements mostly based around its collection mechanics and beating some of the bigger bosses. It also has achievements for certain speed run targets (5 and 10 hours respectively) as well as completing the Steel Soul mode. Most reviewers on Steam seem to have taken between 40 and 50 hours to achieve a 100% completion rating so there are definitely significant extensions to gameplay once the main quest is completed.

The only other thing to mention is the soundtrack by Christopher Larkin that does an excellent job of depicting the despair around you. Whilst you would expect it to be all melancholy piano and haunting strings, there is actually a huge variety to the score. A particular favourite of mine is the track used for the Mantis Lords boss fight which features a harpsichord and accompany strings to make the action feel even more frenetic. The soundtrack is available for purchase on Steam (separately or as part of a deluxe game package) but it can also be streamed on Apple Music and Spotify. Similarly, the sound effects and minimal voice acting (mainly grunts, gurgles, and encouraging noises) are top notch and really make this feel like it is from a AAA game studio rather than a Kickstarter-back indie developer.

Hollow Knight is an absolute gem (or should that be charm?) of a game with a price tag that is far too low for the quality and quantity of game on offer. Whilst many indie titles go for a short and sweet dose of gameplay, Hollow Knight keeps impressing with more and more layers of complexity, rewarding combat, and an ever-growing labyrinth to explore. Throw in the ridiculously difficult Steel Soul mode and achievements for 100% completion and this will keep explorers happy for a very long time.