I received my Nintendo Switch preorder on Friday along with a copy of The Legend of Zelda: Breath of the Wild and a pro controller. I wasn’t planning on writing a review but I’ve ended up with a lot of thoughts and observations. 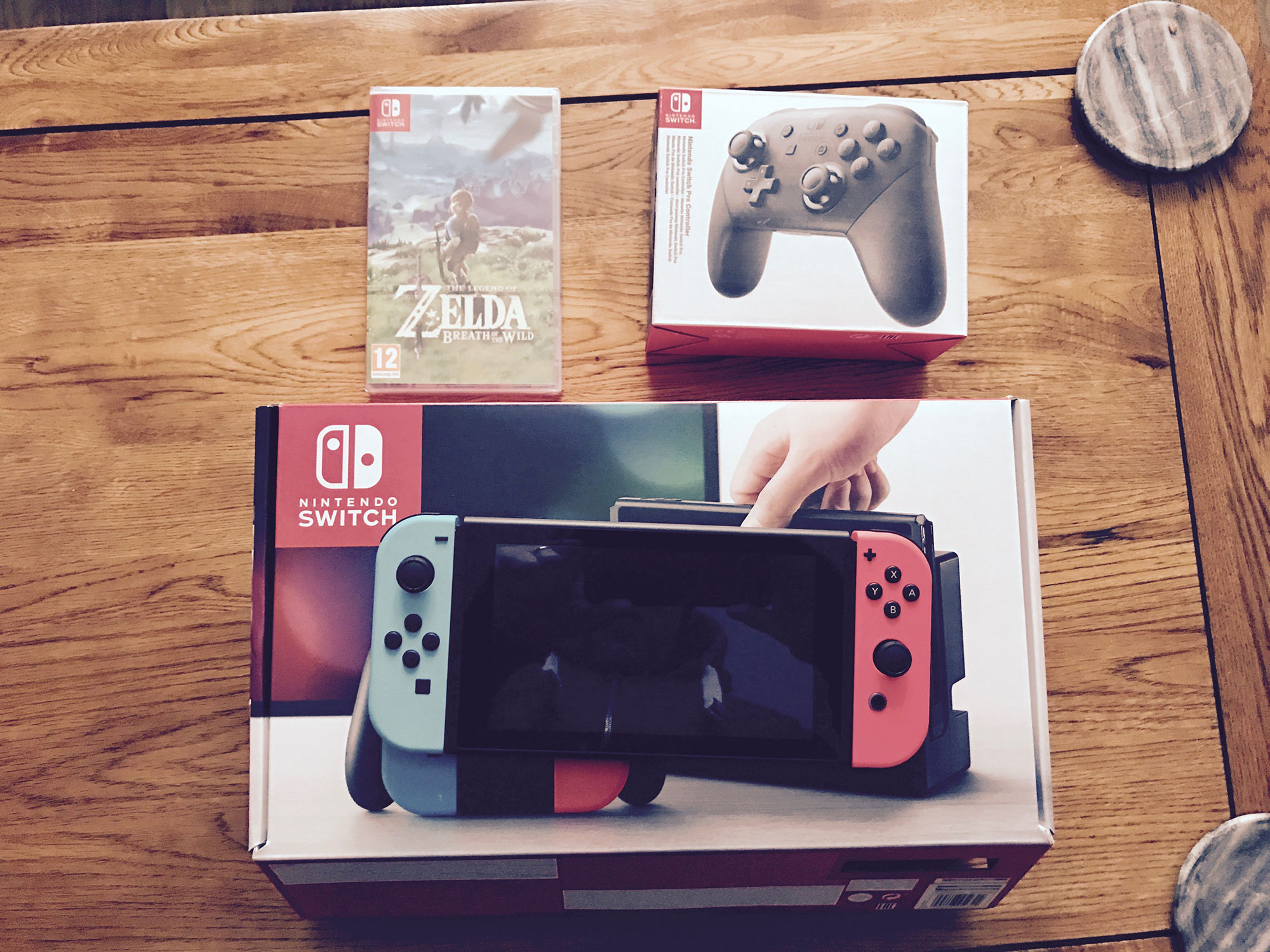 First of all, the Switch is smaller than I was expecting with the usable display being roughly the size of my entire iPhone 7 Plus. This is astonishingly small for a console although the thickness (about the same as a DVD case) and weight make it feel comfortable in the hand. I’ll come to the Joy-Cons shortly but they weigh very little so don’t add anything to the overall console apart from the ability to grip it without covering the screen (and, you know, actually use it). One thing that amuses me after years of iPads and iPhones is that it has an actual spinning fan in it with an exhaust at the top; sometimes you can here it spinning up…

The build quality is very good, especially from Nintendo who have a habit of making everything feel cheap and plasticy. The reason I mentioned the comfortable weight earlier is because it is in stark contrast to the Wii U gamepad which is much bigger (with a smaller screen) but feels lighter as it was essentially cheap plastic and air.

I’ve been switching happily between console and handheld mode whilst playing Zelda and the process is utterly seamless. I originally thought that switching modes may require a restart or something similar but you literally take it out of the dock and you continue exactly as you were on the small screen. I also thought I wouldn’t use the Switch in handheld mode but that opinion has changed now that I can play in my living room but then carry on playing in bed without needing to buy another dock.

In terms of battery life, the longest I’ve played handheld was around 3 hours and I didn’t receive any battery warnings so seems like you could easily get 4 hours or so out of it. Whilst it isn’t going to last for continuous play on a transatlantic flight, the inclusion of USB-C for charging is very useful as I already have battery packs and charging cables to suit (although you may need a pack with a higher voltage).

The game cartridges are absolutely tiny to the point that I think I’ll be buying a carrying case for them so they don’t get mislaid. It is wonderful to be able to start a game pretty much instantly and with no installation time.

The Joy-Cons are very clever and easy to use with a detachment mechanism similar to swapping Apple Watch bands. They are a little bit cheap feeling, especially in the analogue sticks and triggers when compared to the Xbox One or PS4 controllers. They also have the A/B and X/Y buttons reversed (or the right way depending on perspective) as per all previous Nintendo consoles which means switching between an Xbox and the Switch is an utter pain.

The rumble feature is something that received a lot of press but I haven’t found it to be that impressive. So far I’ve only been playing Zelda so it may just be that it isn’t implemented as well there as it is in 1-2-Switch but to me it just feels like normal rumble, nowhere near as precise as something like the Taptic Engine of the iPhone 7.

Ergonomically, they work well enough when attached to the Switch although some button combos can require re-gripping due to the overall width; this is a minor concern for the benefit they offer though. When used on their own (i.e. for a two player game) you do need to channel the hand movements of a crab as they are very small but they should be fine for a short game of Snipperclips; I don’t think I’d want to use them for playing several games of Mario Kart though.

I haven’t used the controllers with the grip much as I have the pro controller but it is much more comfortable and usable than I thought it might be. The benefit of having the grip included and purchasing a pro controller is that for a two player game I can have two “full” controllers rather than using the individual Joy-Cons.

The pro controller is probably a necessity if you are going to play games on your TV for long periods of time but it is a begrudging one. At an RRP of £65, it is way more expensive than the Xbox One or PS4 controllers both of which are very good. The pro controller feels cheap comparatively especially in the triggers which are buttons rather than gradual pressure increasers. It isn’t the worst controller I’ve used (that honour belongs to the Steam Controller) but it is very poor for the price.

My favourite thing about the controllers is the inclusion of a screenshot button. Being able to quickly snap a screenshot is a godsend, especially compared to the janky implementation on the Xbox One. However, the software for dealing with those screenshots is less than ideal as I’ll come to shortly.

The software is where things go downhill for the Switch. On the positive side, the UI is clean and it is incredibly fast, especially compared to the 3DS and Wii U. A notable improvement over the 3DS is that opening up an app like the eShop or settings doesn’t kill your game. You can also switch between a light and dark theme and the Mii customisation is much improved… 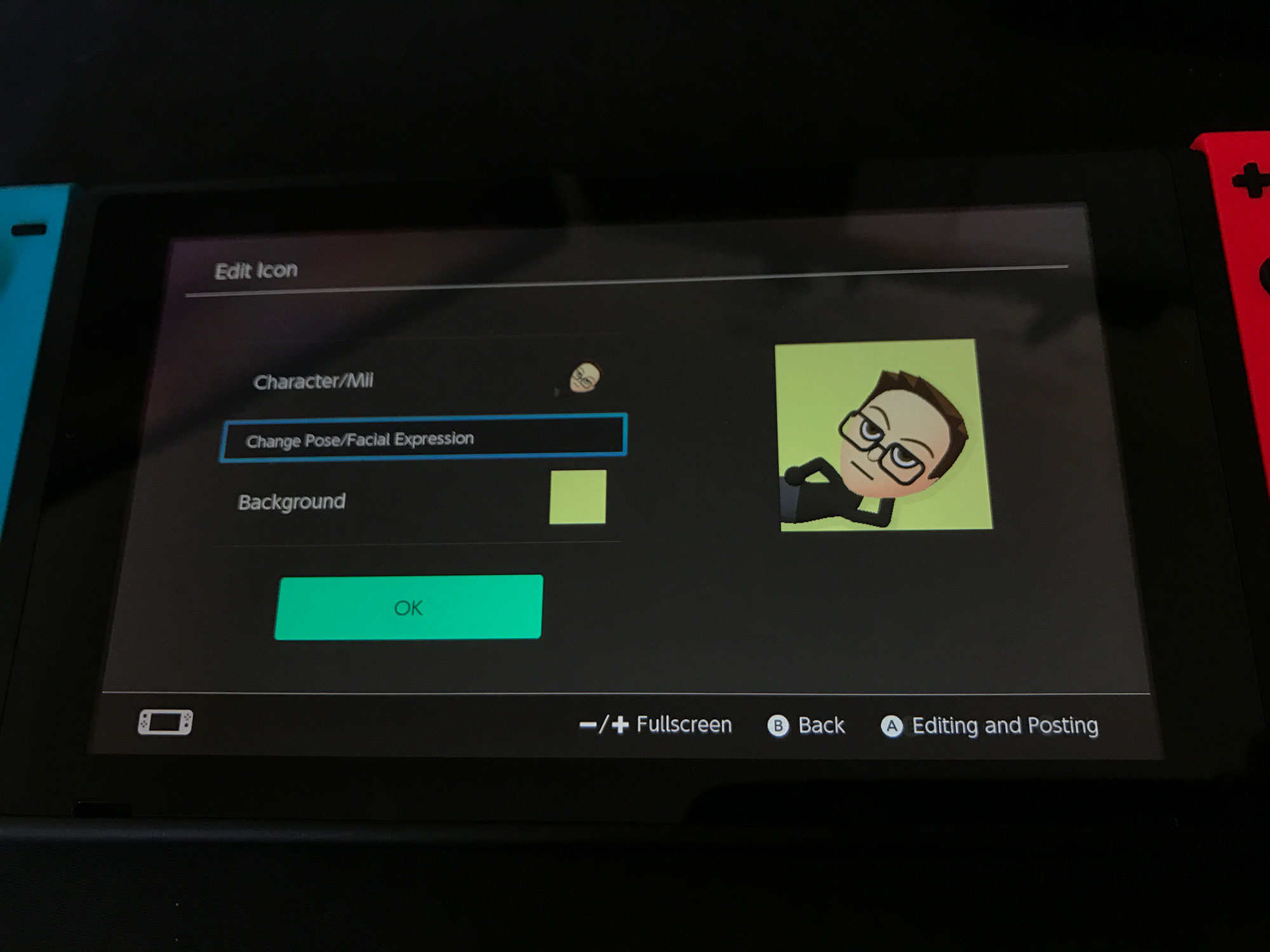 I resisted the urge to have my Mii wink

However, there are several things that I would deem as “missing”.

First of all, there is no way to export screenshots apart from posting to Facebook / Twitter or copying to a micro SD card. With the 3DS you can post to Miiverse but that isn’t an option as there is no social network for the Switch yet. I was hoping that plugging the Switch into a Mac or PC might make the internal storage show up like a digital camera but you get nothing. Nintendo have said they are going to improve this in future but it is a letdown to have such a great screenshot feature built into every controller and then have no easy way to export them without using social media or purchasing additional hardware.

Whilst this is annoying, save files are even worse as they can’t be transferred between devices at all. Steam, Xbox, and PlayStation all have cloud saves which are a blessing if your console dies or if you have multiple systems but no such facility exists for the Switch. You can’t even copy save files to an SD card for moving over to a console in the event of malfunction which seems short-sighted. If I lost my Zelda save, I’d be gutted.

There is no “Activity Log” app on the Switch which means you can’t see how long you’ve played games for. This isn’t necessarily a big issue for most people but I use this feature on the 3DS and Wii U in order to keep my Gaming Time page up to date. I expect this to be fixed in a software update; I’m also hoping this information will be available on some online Switch profile page in keeping with Xbox and Steam.

I wasn’t really expecting it but a part of me was hoping the day one patch would activate an achievement system for the Switch. I love achievements on the Xbox and Steam as they can add extra challenge to a completed game by providing recognition for finding hidden secrets or gaining 100% completion. It is quite sad, but it means that when games are available on multiple systems I will be genuinely torn; do I want Sonic Mania on PC or Xbox where I have achievements or do I want it on the Switch so I can play it in handheld mode. Tricky.

My biggest issue is the lack of support for Bluetooth headphones. There is a Bluetooth chip in there for communicating with the controllers so this is definitely a software issue that could be patched but it is a glaring omission at launch. It isn’t good enough to say, as other commentators have, that the Xbox One and PS4 don’t support Bluetooth headphones as they are working in a very different context where you can pair headphones with the controller or the TV. The 3DS similarly doesn’t have Bluetooth headphone support but that isn’t excusable either. Wired headphones are a complete pain and I’d rather take a slight hit on battery life in order to use my headphones than have to put up with a wire which necessitates packing wired headphones if I’m travelling.

Overall the Switch is a wonderful console but it feels slightly hampered by the software. Fortunately, this is something that can be fixed later but it does feel like we’re paying the cost of having the console rushed to market. Despite the cost vs quality, I’d still recommend the pro controller if you are going to be playing in console mode for any period of time. I’ve only played Zelda for 10 hours at this point (split evenly between handheld and console mode) so I’ll likely post some observations about that after I’ve got a little further; one thing I’ll say so far is that the game is better in handheld mode as the frame rate suffers slightly in console mode.

It is probably too early to say but I think Nintendo may have dodged bankruptcy for the time being. The Wii U was an utter disaster but the Switch seems to have put things back on track. The real test will be the holiday season but I expect Nintendo will do rather well if they time the Super Mario Odyssey release with a discounted hardware bundle.