John says: "A simple but charming physics puzzler that's fun to play with a friend and works pretty well on the tiny joy-con controllers. The core mechanic is fun but it could do with more stages and some additional mechanics to unlock to make it better value for money."

Snipperclips fills an interesting role in the Nintendo Switch lineup; originally meant to be launched towards the end of March, it was bumped up to a launch title likely in response to some of the negative first impressions of the expensive 1-2-Switch which was the only other multiplayer Nintendo game.

You play as two characters (allegedly named Snip and Clip) who can cut each other into different shapes to solve puzzles. Whilst originally in a shape reminiscent of a Bullet Bill, intersecting with the other character will allow you to either cut the exact intersection out of them or them out of you. The only other mechanics are the option to rotate, jump, and control your height in a manner similar to the robot in Machinarium (with a low squat on the floor or standing on tip toes). 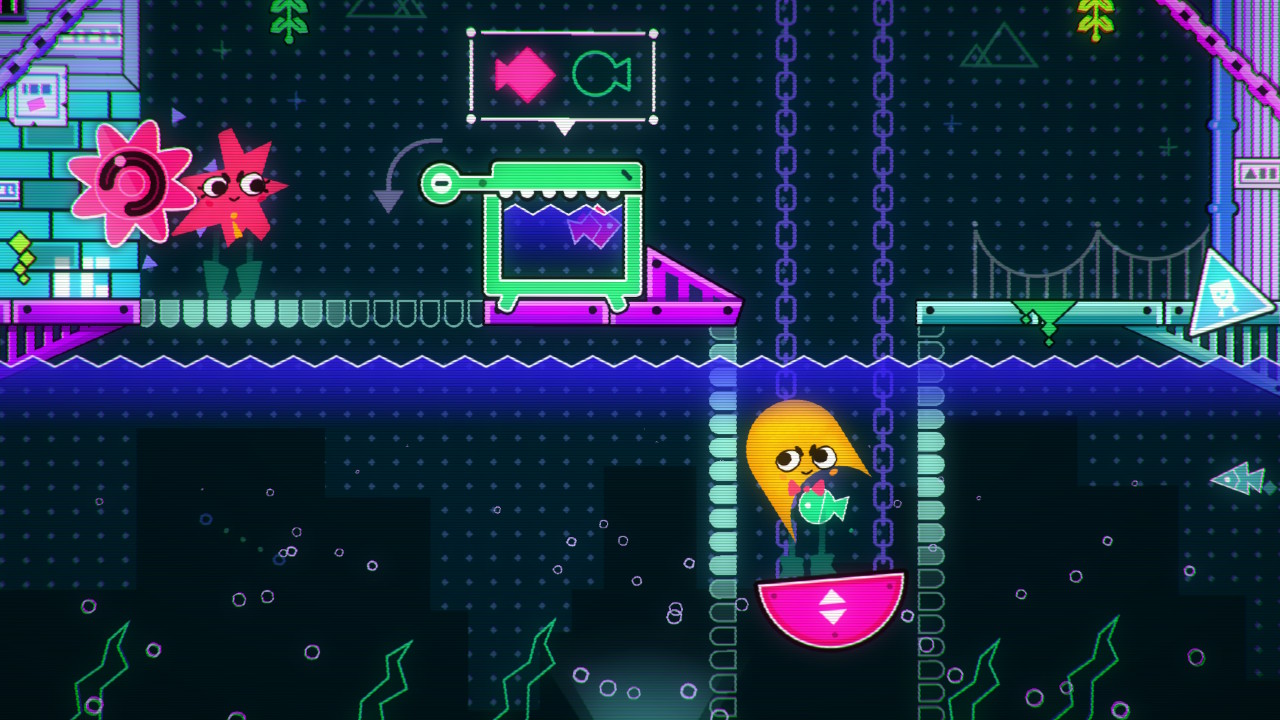 Cogs and indentations will allow you to capture the fish

Each of the 66 levels is locked to a single frame and will have a specific goal to achieve; get a pencil to a sharpener, put a fish in a box, or stop liquid from touching some screaming single-celled organisms (that’s a weird one).

Solving each puzzle requires a bit of experimentation as you discover buttons that will cause things to reset, find cogs or screws that need specific shapes to rotate, or as you try to discover what you actually need to do. There is no text within the game so doodles on the background will try and point you to your goal but these can sometimes be more confusing than helpful.

If you are playing in co-op mode, there will now be a discussion about how you are going to cut each other which will invariably lead to you both cutting at the same time in different places. If you cut out the majority of a character, they’ll disappear and then respawn in the level usually leading to a game of chase as you try and cut each other up. Fortunately there is a reset mechanism whereby you can hold down the left button on the joy-con to restore yourself to your former glory. Tapping this button also allows you to toggle between your full state and your cut state which is absolutely crucial in later levels when you may need to be cut to a certain shape and then go back to your original self to cut your partner. 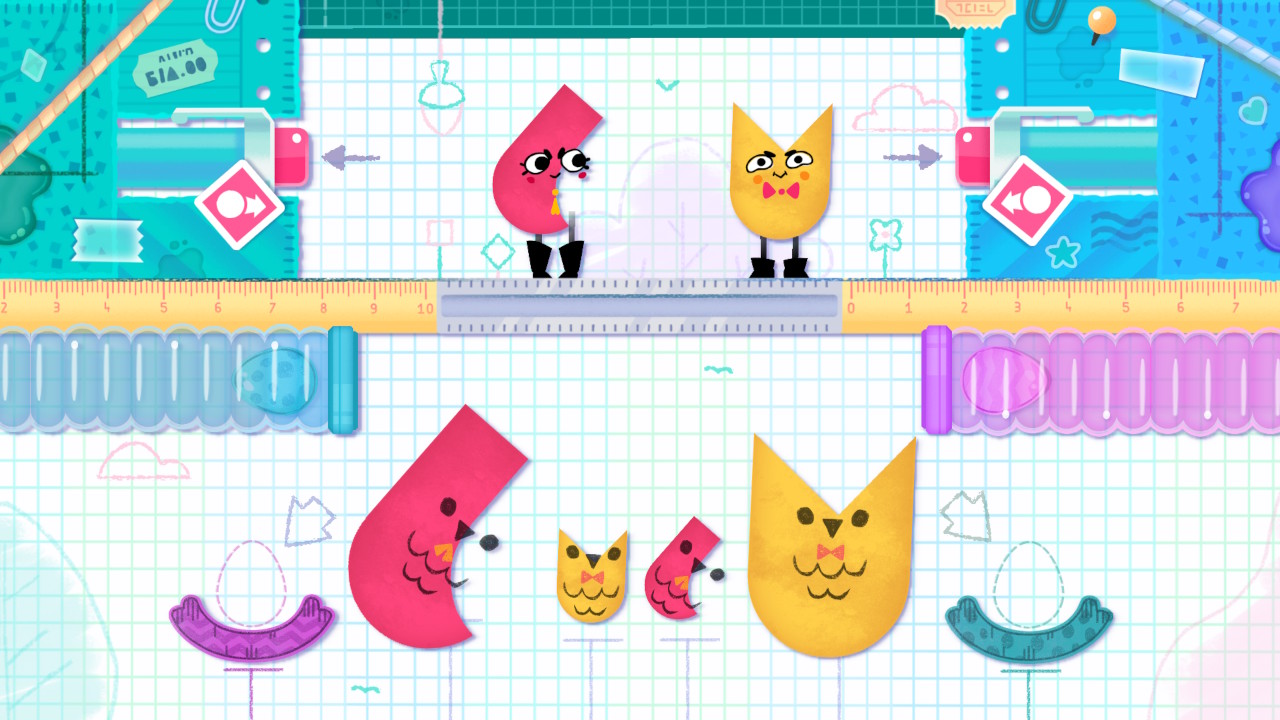 The game has three separate modes that have specific player requirements: the main campaign world can be played with 1-2 players and is spread across 45 levels split into 3 thematically different notebooks. The party mode and blitz modes, however, require 2-4 players so you’ll need some friends or to hold a joy-con in each hand.

The party mode is pretty much exactly the same as the campaign world albeit with 21 unique levels and you have 4 characters instead of 2. This is particularly interesting as the puzzles are the same layout regardless of if you have 2, 3, or 4 players; there are always 4 characters but some or all of you will control multiple characters by tapping the top button on the joy-con to switch between them. This is the same mechanic that is used to control 2 characters if you choose to play the main campaign solo.

Blitz mode is a completely different experience with three different minigames; basketball, hockey, and dojo. The rules are the same when it comes to movement and cutting but you’ll be either playing basketball or hockey in the way you’d expect or trying to cut the other person out completely in dojo mode which really comes down to who can tap the cut button quickest, just like any other fighting game (\Ha!\). This is the mode that I spent the least time in as it doesn’t have enough depth or skill to make it more than a 2 minute play to make sure you aren’t missing anything. 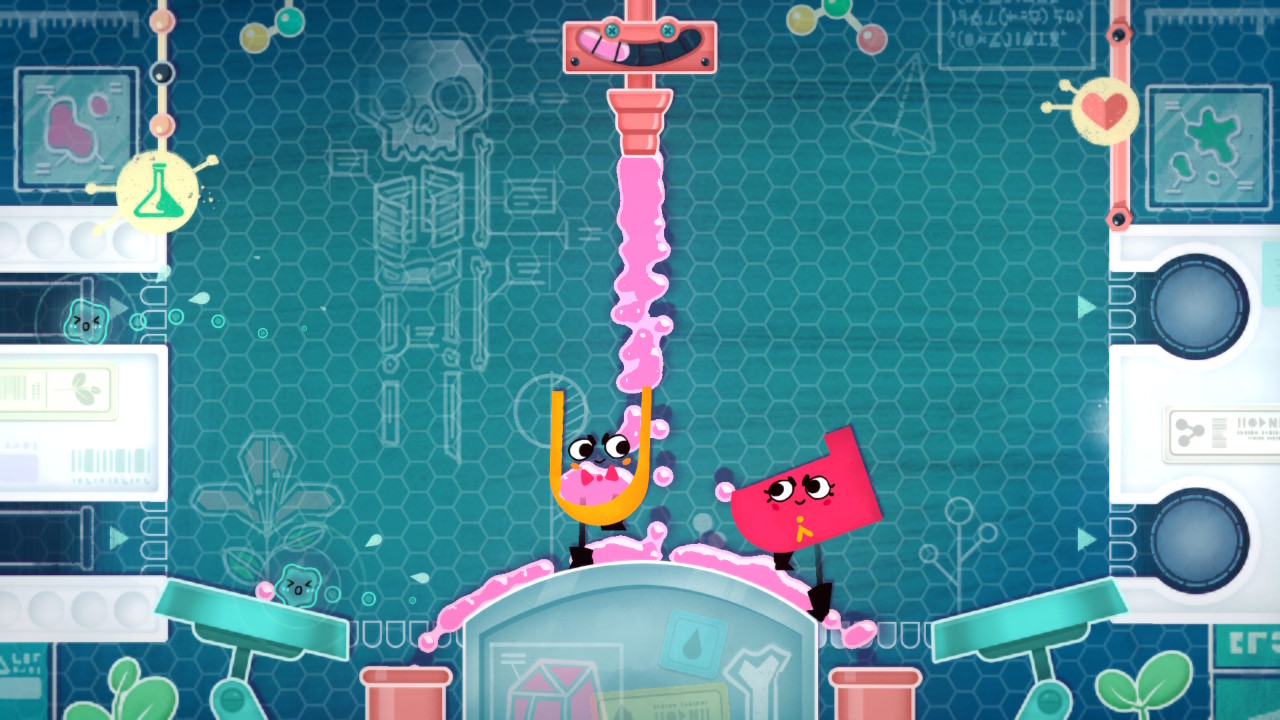 The liquid puzzles can be incredibly difficult

The art style and graphics are simple but charming; it is probably the sort of thing the word twee was created for. Despite this simplicity, I did notice some considerable lag in console mode on one particular level involving strands of DNA. This was peculiar as it should have been less taxing than some of the levels involving real time movement of liquids but the entire puzzle felt like it was running at around 10fps. Thankfully this was not a recurring problem.

The real fun of Snipperclips is in the characters and their expressions. As you cut each other up, they’ll make approving or disapproving noises, sometimes laughing at the gaping hole you’ve just cut into your friend. When you cut too far, a little cry is heard before they unfold like origami out of the ether. As you squat, their eyebrows raise and pushing heavy objects leads to squinting. This makes it an amusing experience, especially with friends, and the catchy background music adds to this by being unobtrusive yet memorable.

My biggest gripe is that you are limited to the joy-cons even if you have other controllers. For example, you wouldn’t be able to have someone use a pro controller whilst the other uses a joy-con and this is particularly frustrating if, like me, you have the pro controller and you thought you could play with 3 people; you’ll need a new set of joy-cons if you want to play with more than 2. It should also come as no surprise that Snipperclips is a couch co-op only title; there is no online multiplayer nor local multiplayer with multiple switch devices. 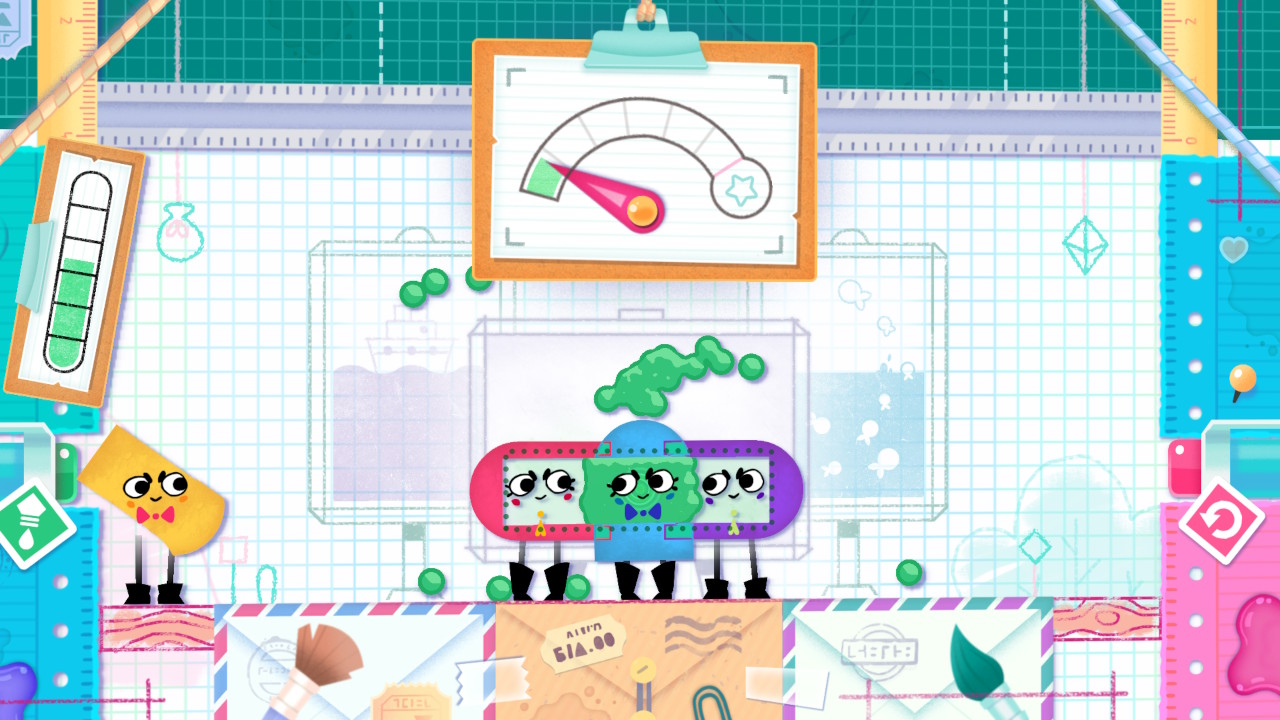 My general rule of thumb is that I want to get an hour of gameplay for every £2 spent; this increases to £5 with indie titles that tend to be shorter. I finished Snipperclips (with a friend) in just under 3 hours so it falls short of both metrics at a price of £18; I personally would have expected slightly more from a first party launch title especially as the game isn’t really replayable. It feels like this could have been either a bit smaller and bundled with the console for free or that it should be a lot larger.

That said, if you have a friend nearby who wants to play then Snipperclips is a great example of how every Switch is automatically equipped to do local co-op thanks to its 2-in-1 controller design. It is the only game on the Switch currently to have a free downloadable demo so I’d definitely recommend you give that a try to see if it is something you want to actually purchase; alternatively, you could wait for them to… wait for it… cut the price.