Ben says: "I'm a sucker for a point and click and this has got to be up there with the best of them (which is no surprise given the heritage involved). The art style, music, and puzzles all blend to make a perfect game only slightly marred by the constant self-references (which can fortunately be disabled in a recent update)."

I’ve been a sucker for a good point and click adventure game since the release of Discworld II in 1996. Whilst I came to the genre at the end of its heyday, I eagerly went back and tried some of the classics like Monkey Island, Day of the Tentacle, Sam & Max, and Simon the Sorcerer. This, then, is a return to the genre by Ron Gilbert, creator of some of the most beloved LucasArts adventures. 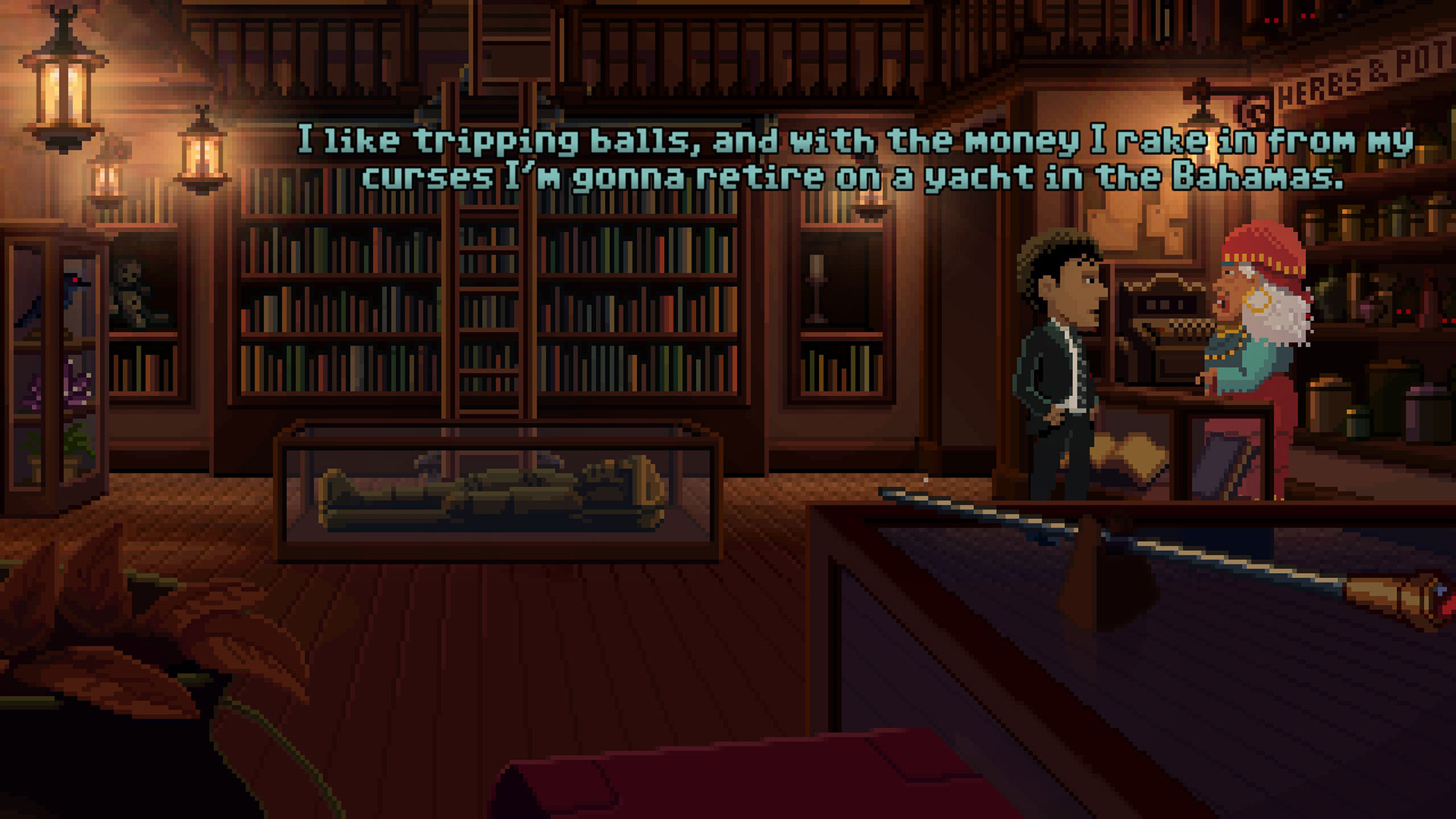 The first thing to note is that whilst some of the mechanics have been modernised slightly, the art style is decidedly retro to fit in with the ’80s setting. Some concessions have been made to those new to the genre with a choice between “casual” and “hard” modes, the latter including a few extra puzzles and red herrings. Whilst other modern point and clicks such as Kelvin and the Infamous Machine give casual players a heat map to show what things in a scene can be interacted with, there is nothing like that within this game.

The controls are much the same as the LucasArts games of old including the beloved action wall featuring 9 different ways your character can interact with their surroundings. New to Thimbleweed Park is a highlight on the most appropriate action; if you are pointing at a person, the “talk to” action will be selected. There is also a completely different set of non-standard actions for one of the characters…

Each character has an inventory and items can be picked up, given to other characters, looked at, and used. Some of them are just red herrings intended to throw you off a puzzle solution whereas some really need you to look at them to catch some detail you might otherwise miss.

Movement is controlled with the mouse via a single click but a double click will increase movement speed. Early on in the game you’ll find enough maps for all of your characters at which point they can use this to fast travel to locations around the fairly vast town. 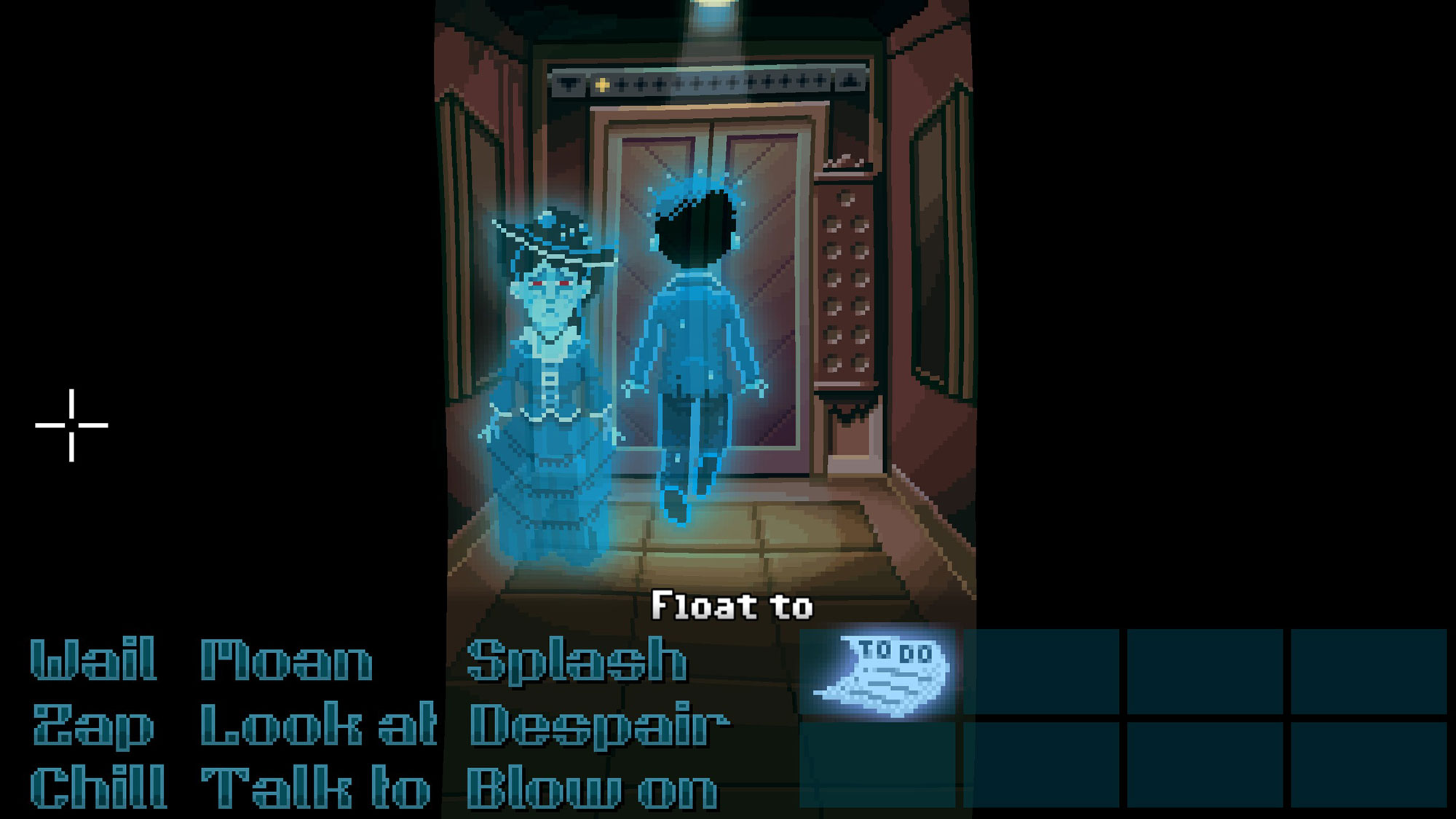 You start the game with two characters that you can switch between; Detectives Angela Ray and Antonio Reyes who bear a striking similarity to Mulder and Scully. Later on, you’ll unlock the ability to play as three other characters; Delores the aspiring adventure game developer, Ransome the offensive clown, and Franklin the ghost. There are points throughout the game where you may be locked to a subset of the full character roster but usually you can switch between them at any point with a character picker in the top right hand corner (at which point you are instantly transported to their location).

Each character has their own inventory and whilst you can give items to other characters who are stood next to you there are some items they refuse to part with. There are also certain things or people that can only be interacted with by a specific character. Whilst a nice mechanic, it can quickly become irritating if you are trying to solve an obtuse puzzle and you need to cycle through every character to do it (especially as it can be difficult to get them to the same location or have access to similar items).

One of the more interesting pieces about the characters is that each one has “to do” list that clearly shows what their current objectives are. I felt this was too much hand holding and should have been limited to the casual mode especially as later in the game it doesn’t really serve much of a purpose as you already know what you are working towards. 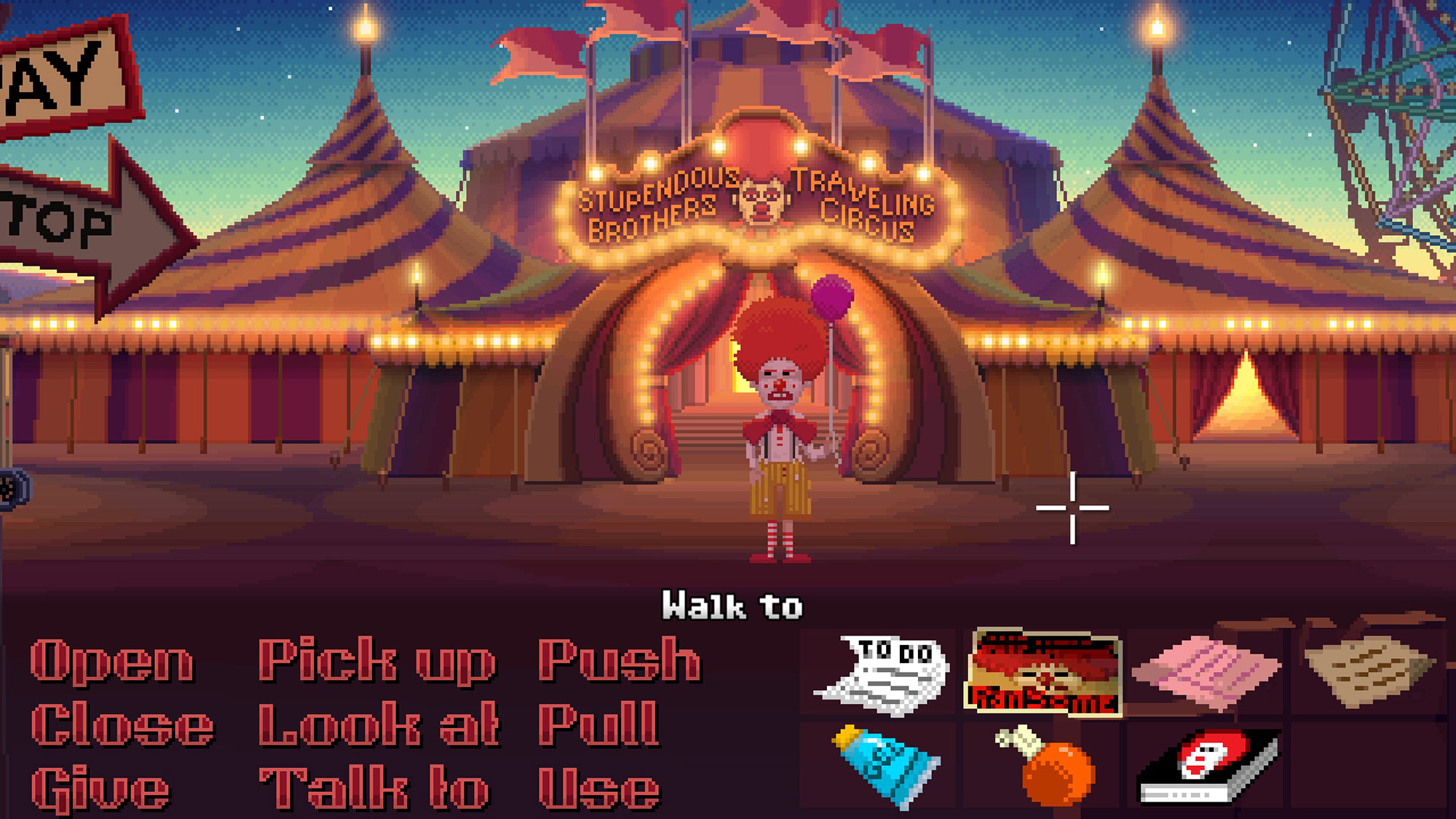 The story finds the two detectives coming to the town of Thimbleweed Park in order to solve a murder but quickly derails into investigating some of the mystery surrounding the pillow factory and its charismatic founder and hero of the town, Chuck. This story is told through 8 different chapters which have a specific goal that needs to be reached before they will end (i.e. “solve the murder”). There is often an amount of time that has passed between chapters so you’ll need to revisit locations to make sure that nothing has changed significantly.

In addition to the main story, each character has their own reason for being in the town which is generally explored through a flashback sequence before you unlock them as a character.

I felt that the story started to drag a little towards the end and the final resolution wasn’t what I had hoped for. That said, the bulk of the game has excellent writing with a number of amusing moments. Whilst I didn’t roar with laughter as I did whilst playing Kelvin and the Infamous Machine recently, I did enjoy some of the more bizarre moments and the slapstick style that is employed in these kinds of games.

I would be remiss if I didn’t mention the excellent voice acting throughout Thimbleweed Park. Every piece of dialogue has been recorded and this adds up, especially as every item can be looked at and tried with the various actions by every character. Special mention should be given to both Delores and Ransome who really sell their characters through the voices. Whilst you can turn this off and enable text for the more classic feel, I preferred to enable both allowing me to skip dialogue after reading it if I wanted to. 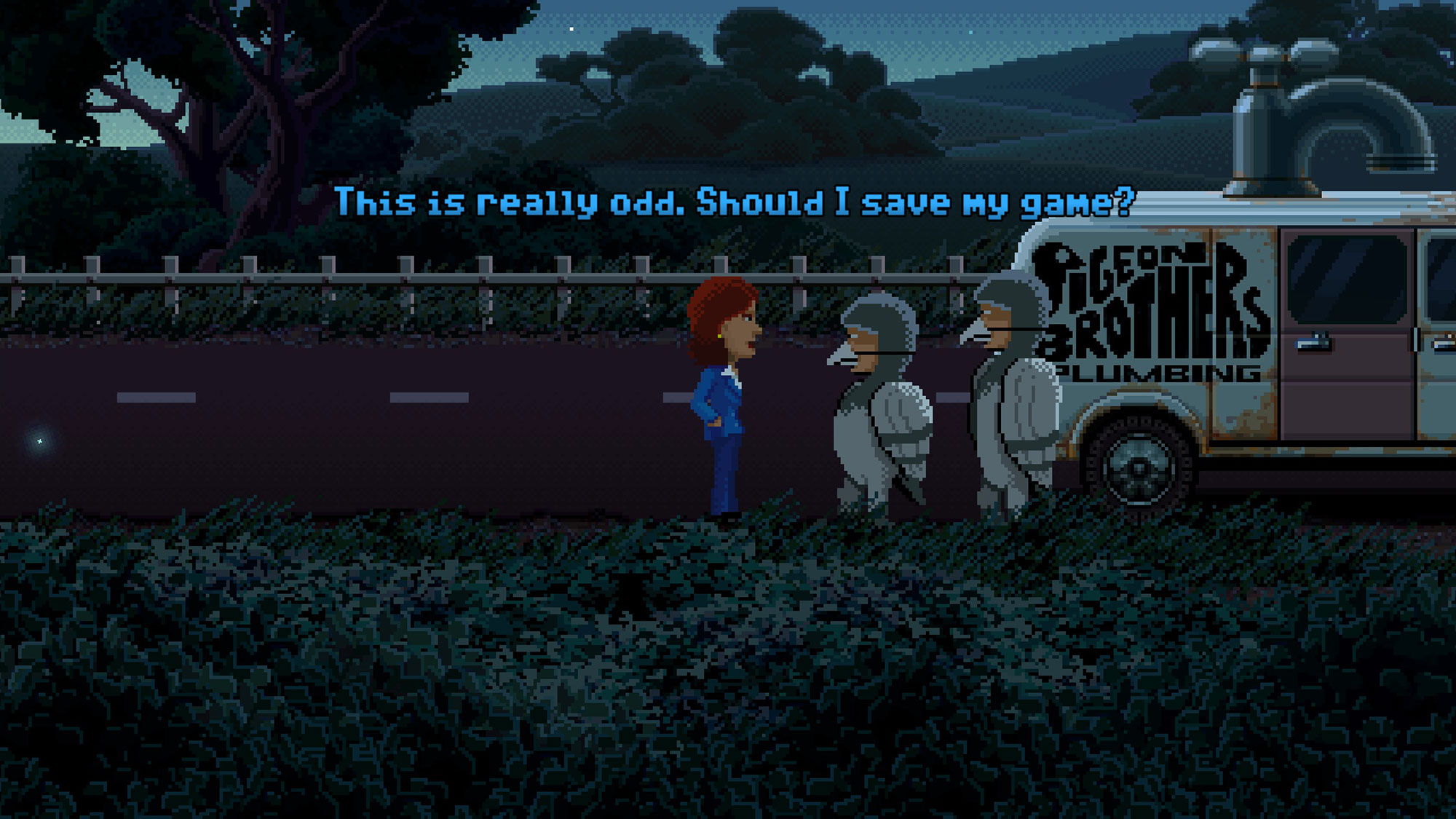 In terms of extras, Thimbleweed Park has 8 collectible Steam trading cards and a number of achievements split between milestones in the story and interactions with specific items in the game. It was a shame that completing the game in “hard” mode didn’t unlock the “completed in casual mode” achievement as most other games tend to, especially as I missed a few hard achievements so I’ll need to reply in both modes if I want to get everything.

Whilst there wasn’t support for my 21:9 widescreen, this is generally expected in these kinds of games. There is full support for controllers mainly due to the game being available on Xbox One; I didn’t use one as it would seem to be a much slower experience than using the mouse (and the single button on the keyboard to skip dialogue). 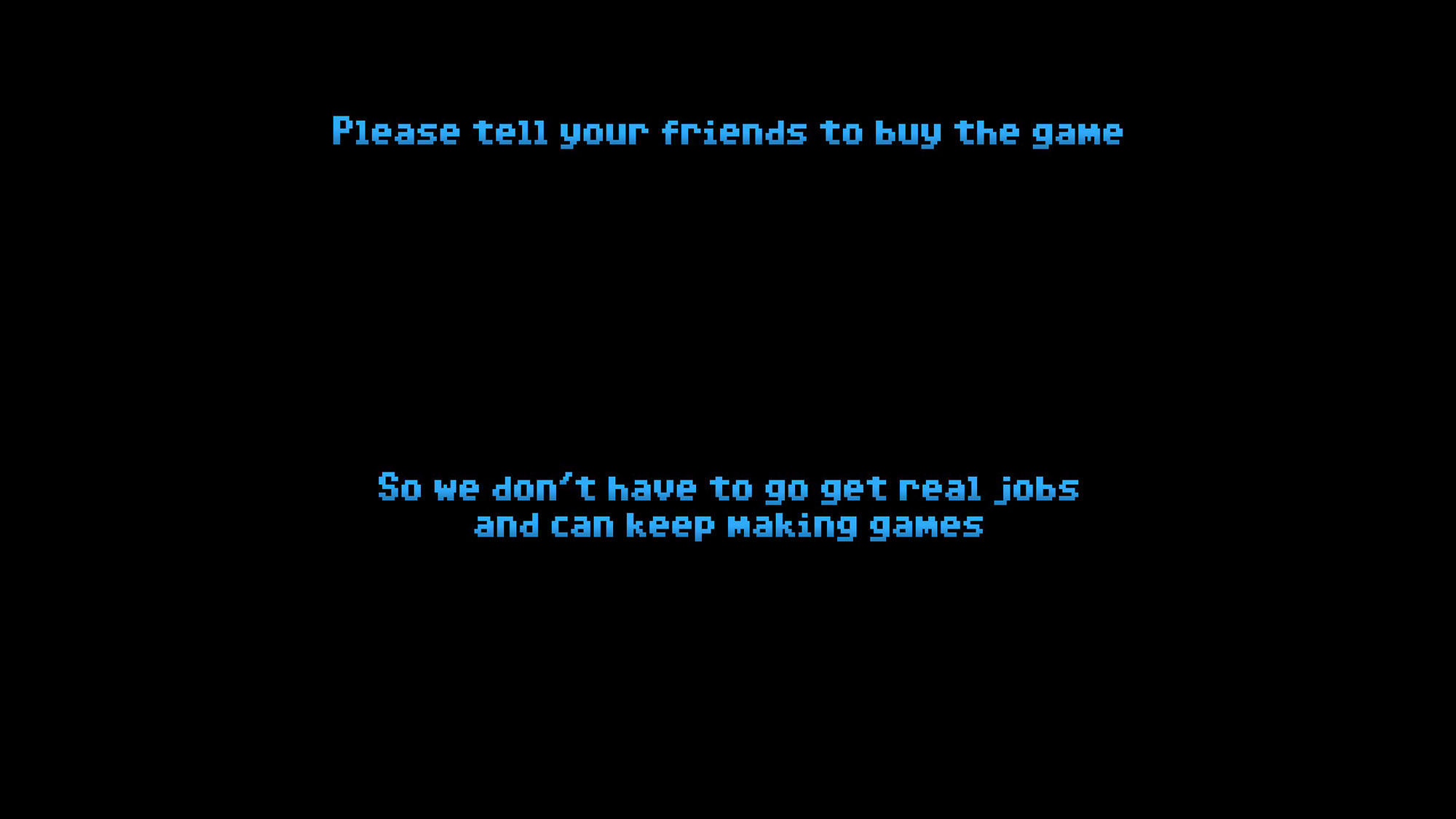 I’ve purposefully tried to avoid talking about the puzzles in the game as even a slight mention of an item, location, or character could be enough to reveal a puzzle solution; case in point, I was stuck at a particular point and then listening to a review of the game on the PC Gamer UK podcast unfortunately, and inadvertently, gave me the solution. The puzzles are fantastic mainly striking a good difficulty balance; there wasn’t anything massively obtuse but the fact that some characters won’t do basic things with an item (so you assume it isn’t possible) can be infuriating when you needed to use a specific character all along.

My issue with characters extends slightly deeper as whilst I really like the mechanic it has been implemented a little sloppily. There is no reason for most of the characters to talk to each other yet (to take a random example) Ransome the clown can happily give an item he has found to Delores to hold and use for no reason whatsoever. This could have been improved simply by letting characters use the “talk to” action on each other in order to tease out more backstory and reasons for them to work together; instead you have an odd situation of characters helping each other with no dialogue.

The only other negative I had was the sheer amount of adventure game jokes. Whilst Rob Gilbert games have always broken the fourth wall, this one goes a little too far for my tastes with near constant talking about adventure game puzzles and design. In many ways this is a symptom of it being a Kickstarter project — fans want this kind of fan service after all — but it felt gratuitous by the end.

I really enjoyed my time in Thimbleweed Park over the course of 14 hours and whilst I’m not desperate to replay it immediately to get all of the achievements it is definitely something I can see myself returning to. If you loved the adventure games of the ’80s and ’90s then it is a no-brainer; if you found them to be too obtuse and obsessed with themselves, then you’ll find that little will have changed to improve things.