Ben says: "A creepy Tim Burton style platformer that is incredibly short but at the same time incredibly impressive bearing in mind a single person did everything from design and development to story and music. Whilst the game has a few good moments, the real joy is in seeing how much one person can do."

Last year I recorded an episode of The Divide in which we discussed crowdfunding, a modern phenomenon I equated with begging (and which I still don’t really like). Whilst preparing for some follow-up in the next episode, I went through some games on Kickstarter and ended up backing quite a few including Pinstripe which was described as a “bizarre and beautiful 2D adventure about a minister in Hell made by a one-man team”. Whilst it was slightly delayed from its ambitious release schedule, the game did arrive in April and I had a pleasant evening playing through it three times.

Yes, three times. This is not a long game by any stretch but one that almost demands multiple playthroughs so you can fully appreciate the bizarre world that Thomas Brush has created. 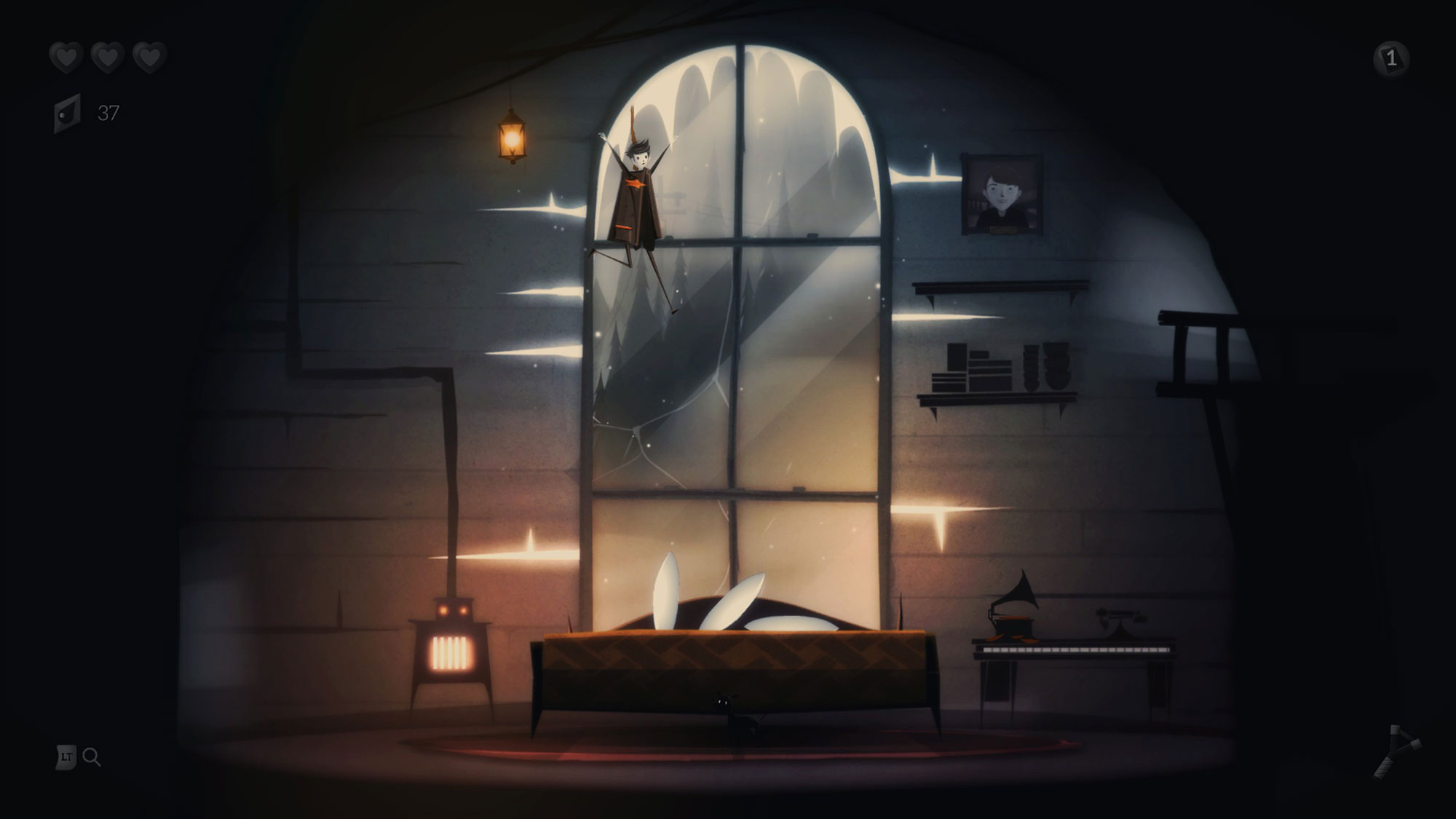 You play as Ted, an ex-Minister who begins the game on a train with his daughter Bo before she is kidnapped by the shadowy Mr Pinstripe. You are then dropped into a snowy fantasy world to explore, solve puzzles, and try and find out why your daughter has been taken and how you can get her back. Throughout the short story you’ll come across a myriad of characters (who will either try and help or remain ambivalent to your plight. There are also a few enemies to take care of although these are relatively easy to dispatch once you find a slingshot that will serve as your primary weapon. Killing an enemy will reward you with currency that is required for an item half way through the game; whilst it was a bit of a grind to reach that first milestone, your currency is maintained in subsequent playthroughs instantly shaving 20 minutes or so from your second run.

The primary driving force for the game is definitely its puzzles which aren’t terribly difficult but remain enjoyable. These vary from basic button pressing and timed platform jumps to physics based hoop games and a shooting gallery. One interesting type of puzzle that was used frequently (and isn’t usual in a platformer) was “spot the difference” in which you needed to select the areas where something was different between two paintings. Whilst my initial thought was that it was a little odd and far too easy, later versions did become much more difficult; the downside, of course, is that they are only small screens so you could spam the reveal button over the entire area until you got through. It also doesn’t really make sense in the world as why would this be a mechanic to open a door? 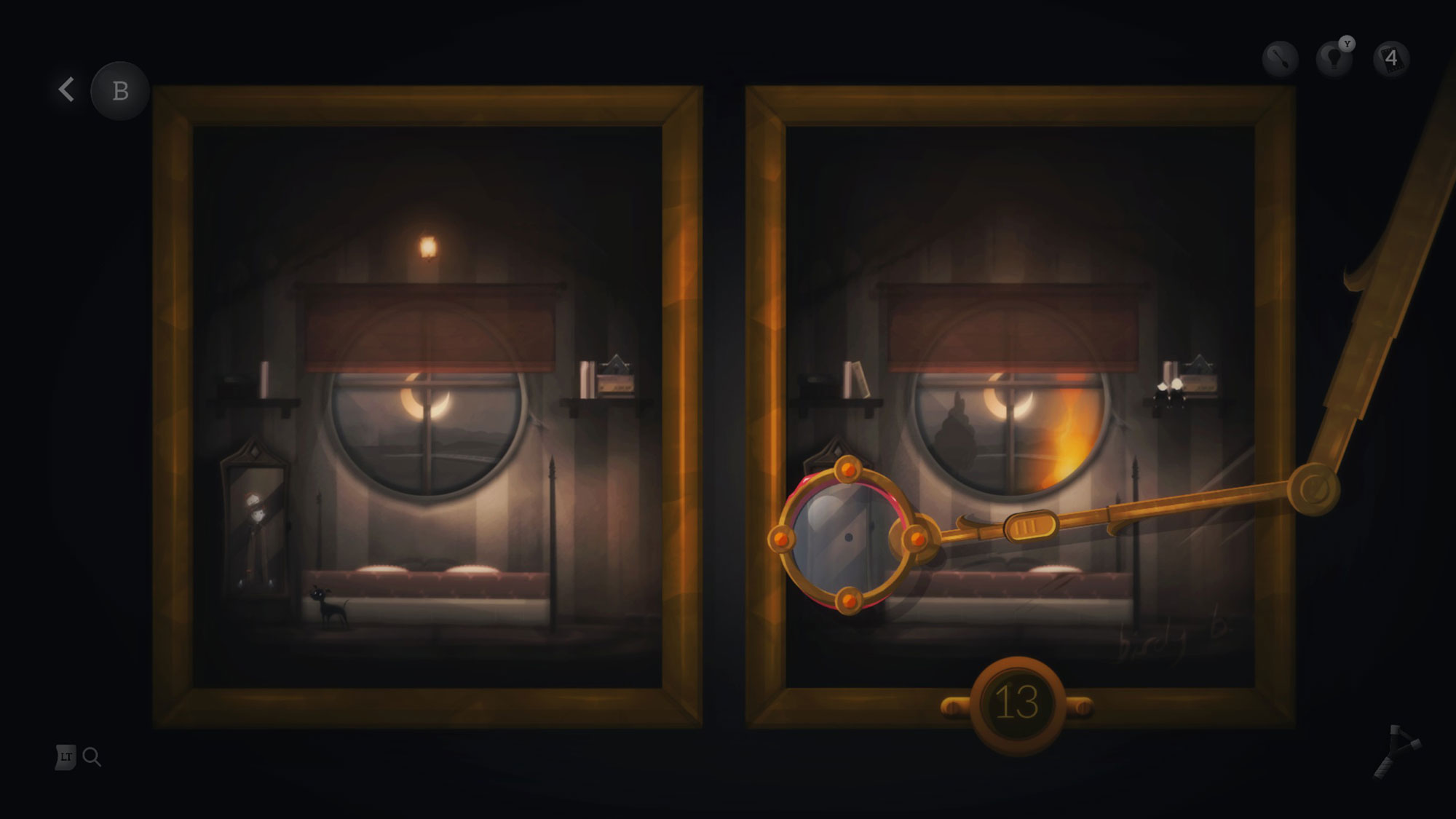 The real draw of the game isn’t so much the story or its puzzles, but the story of its development. The entire game has been built over a 5 year period by one person, Thomas Brush, in which he has developed every aspect on his own. This extends not only to the graphics and game engine, but also to the soundtrack which he recorded himself and that he discussed in a fascinating article on Gamasutra. As a backer, I was always impressed with his timely updates on progress and the care and attention he took to each aspect of the development which can clearly be seen from the meticulously crafted visuals. On a personal note, he also seemed like a nice person with frequent shout outs to other Kickstarter projects of which I backed a few (such as Knights and Bikes and A Place for the Unwilling). I have had many bad experiences with Kickstarter and I disagree with many developers who use it to fund their development, but this was a case in which it worked really well.

Whilst the majority of the game was a solo effort, special mention must be made of the voice actors who lended their talents to Pinstripe, especially those that voiced Bo and Mr Pinstripe. One of the interesting aspects of this is that the majority aren’t professional voice actors but Youtubers such as Pewdiepie, Jacksepticeye, Dan Avidan, and (my personal favourite) Egoraptor. Regardless, they really help sell the world especially when it is coupled with the beautiful “Tim Burton-esque” art style and haunting soundtrack. 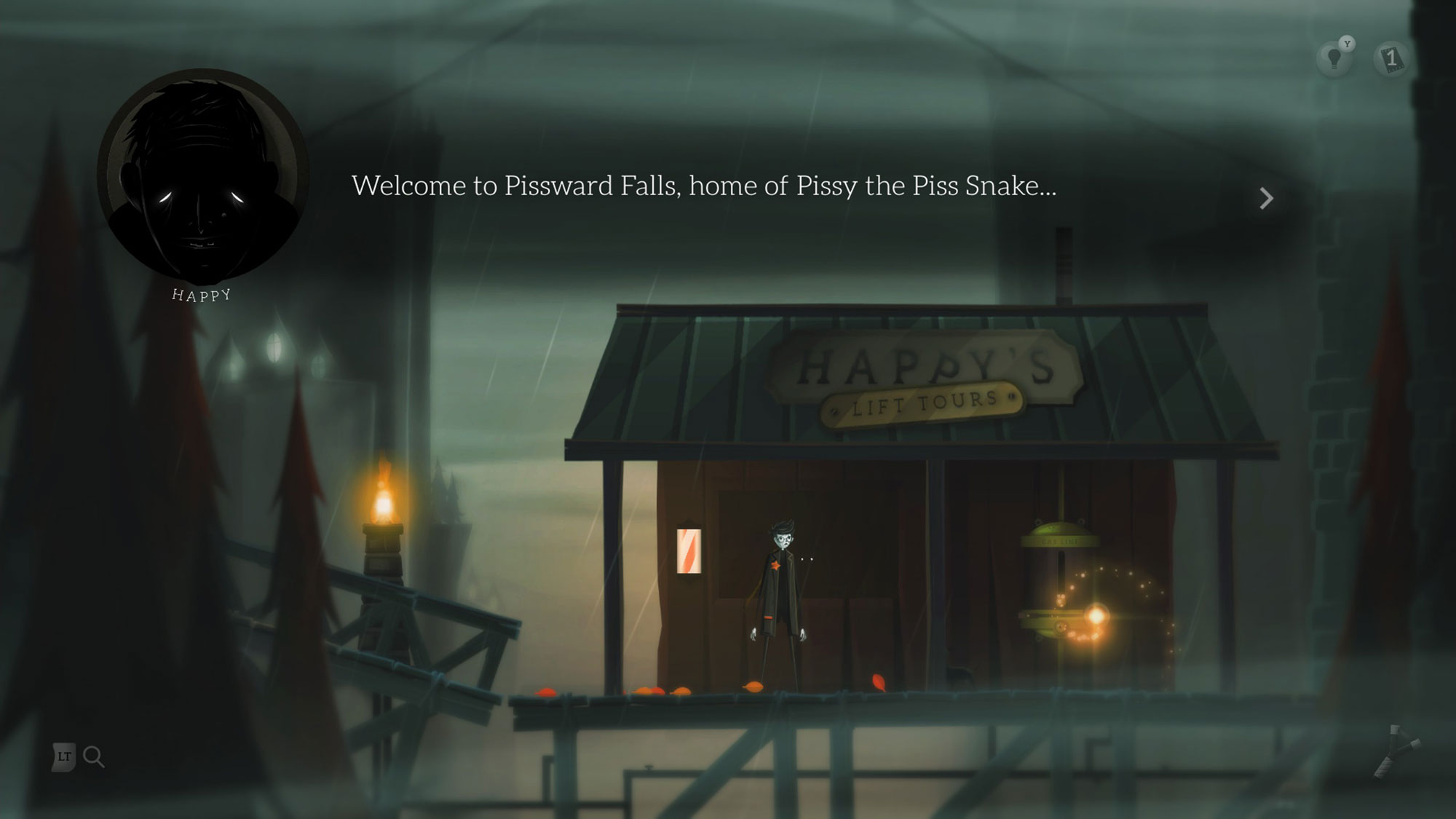 I massively enjoyed my time with Pinstripe but I did have a couple of issues. Firstly, ultra widescreen monitors are not supported but it looks like they are when you start the game. The resolution can be selected and things don’t seem off until you get to the forest level and you realise that everything on the left and right is clippings and off-screen content you shouldn’t see. Interestingly, the physicality of the world is correct so whilst there might be a pit or a cliff in those side areas, when you get to them you continue to climb or descend the rolling scenery as you would if the proper level was being displayed. This was a minor issue and easily remedied by switching to a 4:3 resolution (leading to black bars) but it did confuse me for my first 20 minutes or so.

Another issue is the achievements. There are only 12 of them (including one for speed running the game in under an hour which is actually surprisingly easy) but none of them unlocked for me on my first or second runthrough. I eventually remedied the problem by verifying the integrity of the game in Steam but it was a shame to miss out on them as you really need two or three runthroughs to collect all of them and it is unlikely I’ll play that many times again.

The final issue is related and is that the game is incredibly short, even by indie game standards. My first run through was completed in just under 2 hours and that included a fairly substantial grind for currency; subsequent run throughs took around 45 minutes each and I’m really not the speed running type! Whilst I’d hate for something like this to be ruined by unnecessary padding, it did feel a little short compared with other indie titles especially as there isn’t a huge amount of new things to find on subsequent playthroughs beyond some special Kickstarter credit areas and an alternative ending based on how you respond to people throughout the world. 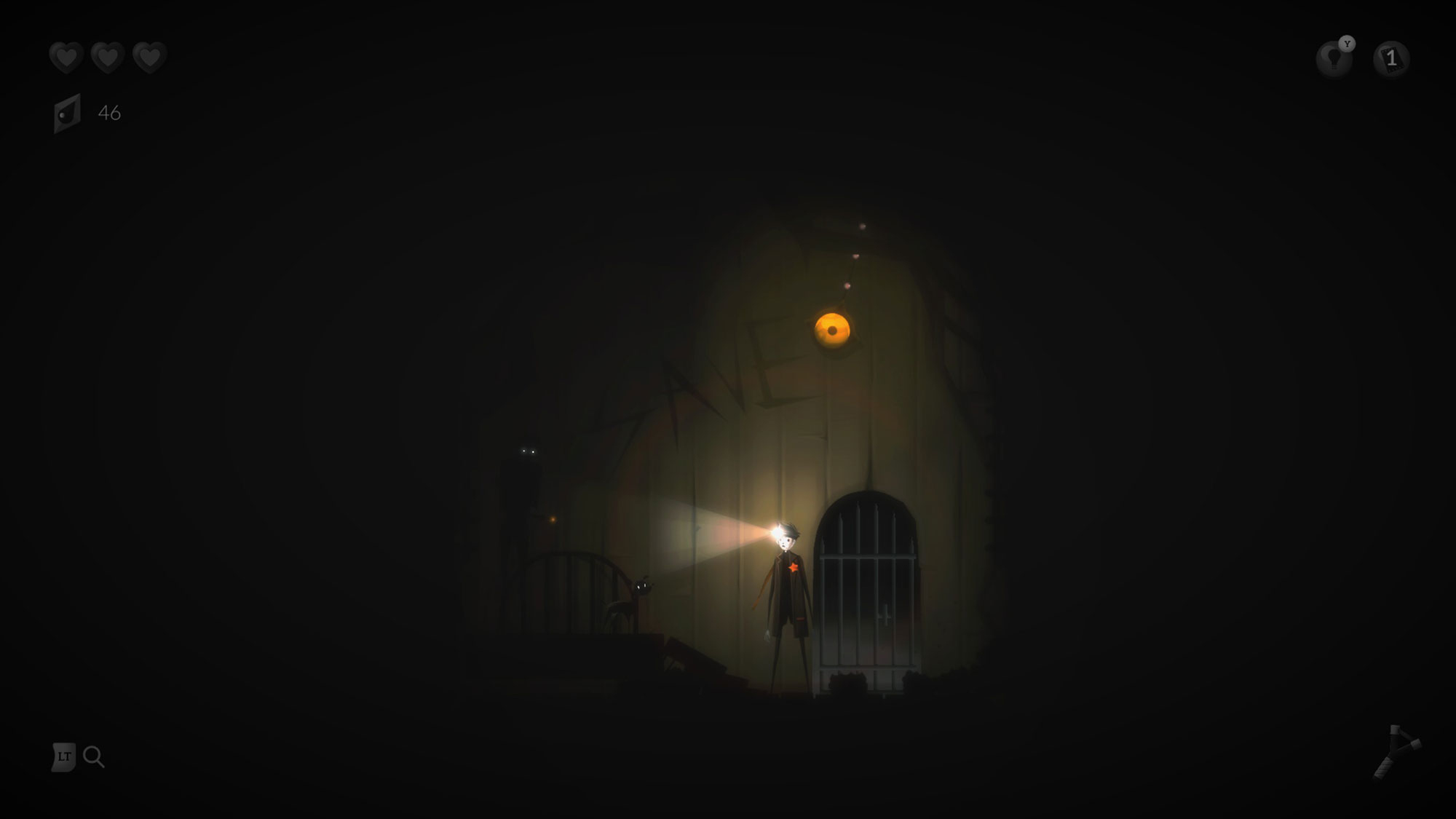 Overall, I really enjoyed my time playing Pinstripe and the final few seconds of my first play got me right in the feels. Thomas Brush has managed to build a believable world with some imaginative characters and an interesting story whilst also building and designing everything himself. Whilst it could have been slightly longer, the amount of love and effort that has gone into this project is worth the entrance fee alone. If anything, this is a motivational project that shows just how much a single person can do.