Ben says: "An interesting hybrid of platformer and point and click adventure with a delightful design and a wonderful soundtrack. The story was intriguing and ended up lasting a lot longer than I expected from an indie title."

Candle continues a trend of mine recently in playing through a game and then discovering at the end that it was a delayed Kickstarter project. In this case, the game was originally pitched as being ready for January 2014 but actually launched in November 2016. It had been on my wishlist for a while as the handmade visuals grabbed me instantly and the indie-developed “adventure with challenging puzzles” is one of my favourite genres. 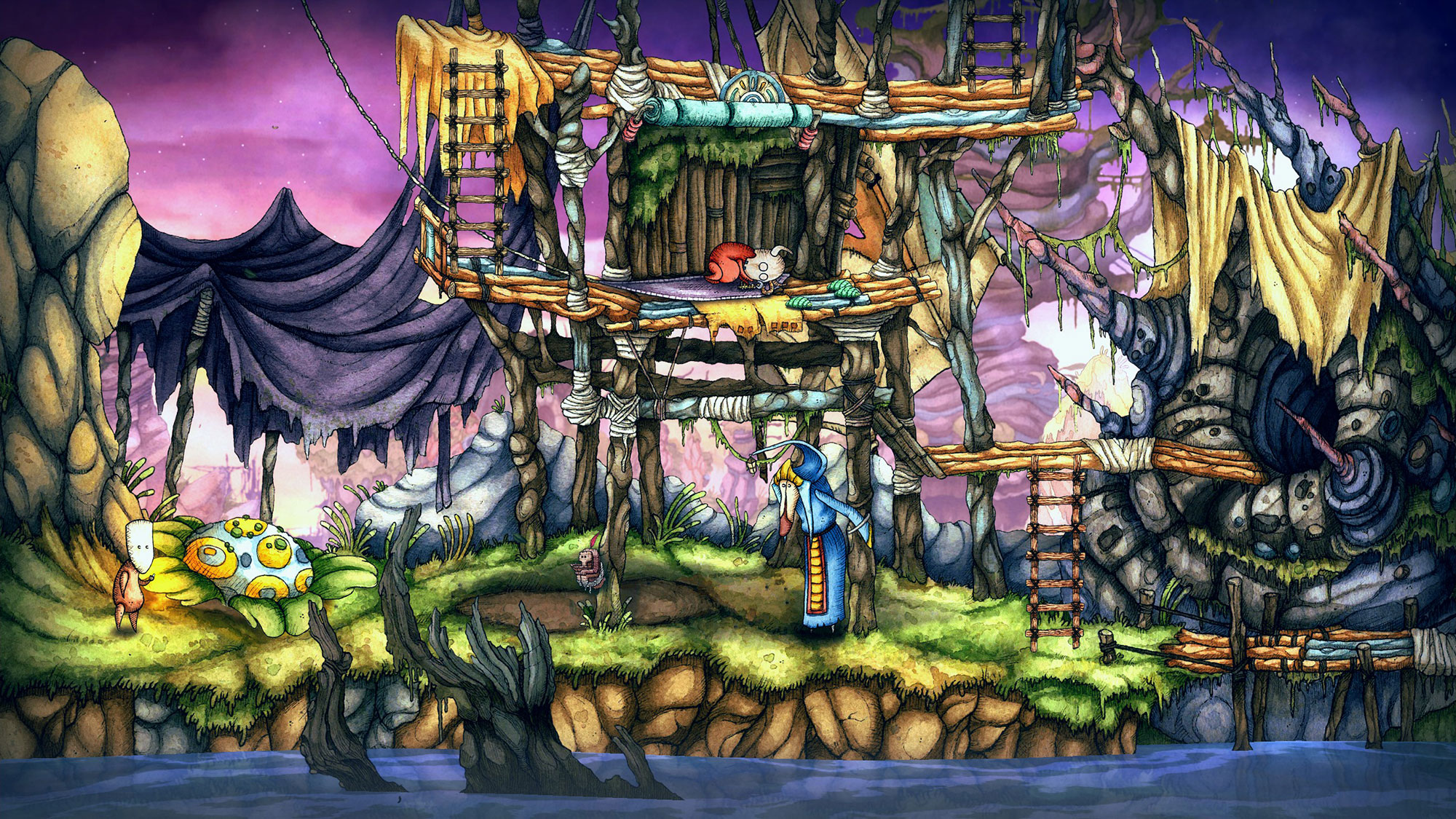 You play as Teku, an apprentice shaman who goes on a journey to rescue his master after his village is razed by an opposing tribe. During the process, you’ll uncover a fairly creepy backstory as you go through a couple of differently themed areas such as a swamp, aztec temple, and city.

The interesting mechanic for Teku is that one of his hands is the titular candle; you use this candle in several places to solve puzzles by transporting fire although you can’t just summon a flame when you want it, you have to light it from another source first. Whilst this seems similar to using a Deku stick during the early levels of The Legend of Zelda: Ocarina of Time, the difficulty increases over time with things like rain to contend with in later stages. There is also a light burst that can be performed when your candle is lit which affords you a quick burst of light that is necessary to complete some puzzles; I’d forgotten this action was available after the brief tutorial and wound up getting stuck for a long time during an early part of the game.

The movement system has garnered some negative reviews on Steam with a lack of good mouse and keyboard controls being particularly onerous. I played using my Xbox One Elite controller but I did find that jumping was not as easy as it could be. Holding a direction and pressing “a” will jump in that direction whilst just pressing “a” will jump upwards; if you hold the right trigger and move then press “a” you’ll do a running jump. This is a fine scheme in theory but in practice I’d often end up jumping too far or too short (or not at all in some odd cases). Needless to say there are some tricky timed platformer elements and so a jump button that doesn’t always act as you expect it to can be frustrating. This is doubly frustrating when there are only fixed save points so you’ll often find yourself going back quite a ways should you fall and die.

The other slightly odd movement choice is that there are several areas of the game where you have to press “x” to walk to an area as the movement system doesn’t really support going backwards or forwards, only left and right. Whilst this is fair enough for some of the more complex bits of scenery (such as walking up a spiral staircase where you would be hidden from view), it is a little peculiar in places where there is just a slight ramp. Some of the scenery also looks like it should be navigable but it isn’t leading to a little bit of time walking back and forth in front of it thinking that the button prompt might show up. 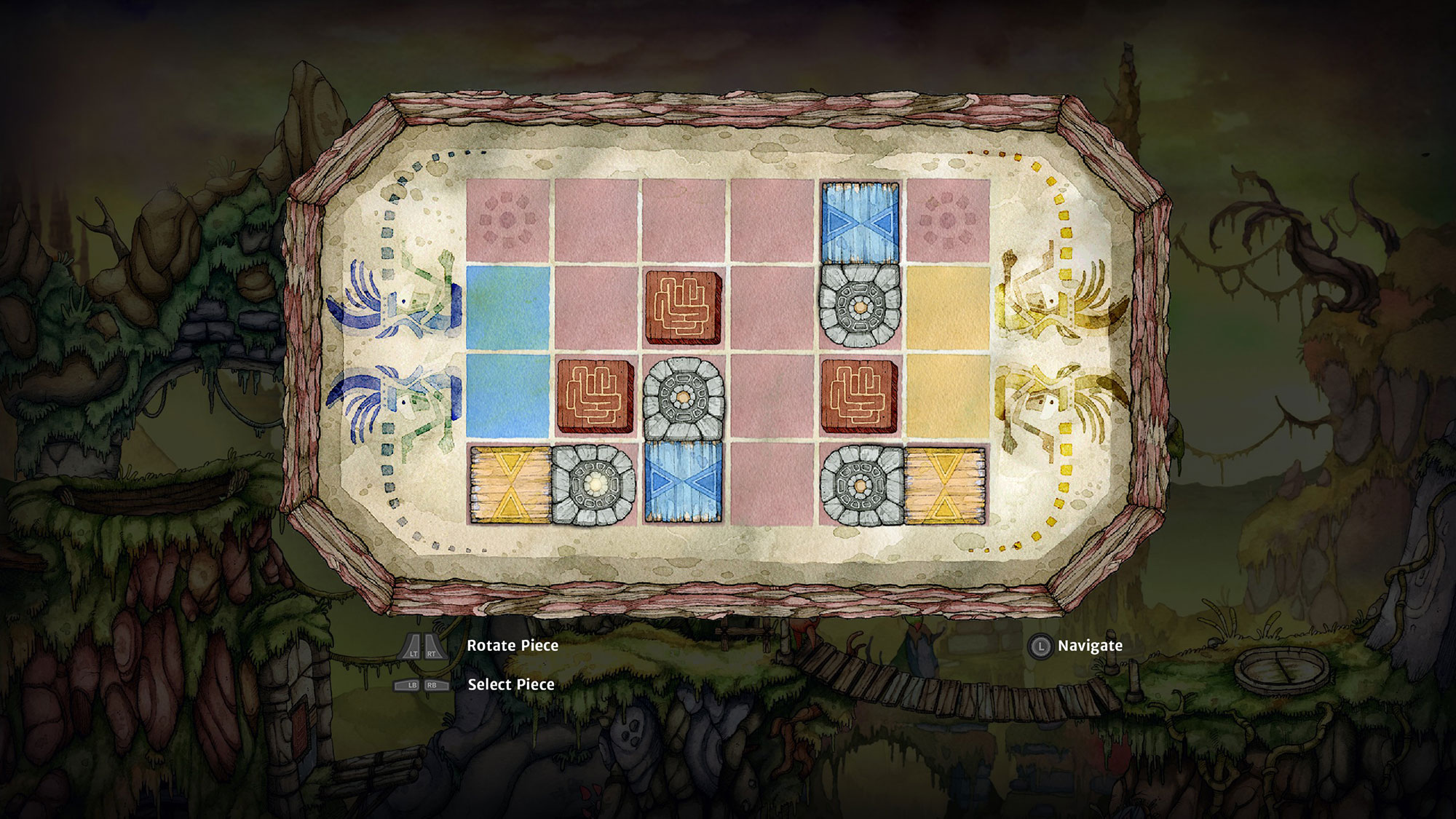 There are minigame-style puzzles throughout

At its heart, Candle is a hybrid of a point-and-click and a platforming game, think something like Abe’s Odyssey meets Machinarium. There are plenty of head-scratching moments and these are tempered with timed platform jumps or traversal mechanics such as jumping up and down on a surface to break it. There is a basic inventory system that lets you pick up items but unlike a point-and-click you don’t get to arbitrarily use them; instead there are specific prompts that let you pick an item from your inventory making it fairly obvious that you need to use an item at this point. There aren’t any “red herring” items that I found so again it tends to be obvious what needs to go where.

In addition to puzzles and platforming, there are numerous minigames that need to be played in a similar vein to Machinarium. These vary from an interesting play on the Jacob’s Ladder puzzle with a toy box featuring a dragon and a warrior to a pipe dream style game that requires you to rotate and place tiles of pipes in a specific order to allow water to flow. Aside from the Jacob’s Ladder, none of them were particularly taxing instead being more time consuming. This isn’t necessarily a negative though as it was a nice change of pace from other puzzles throughout the game. 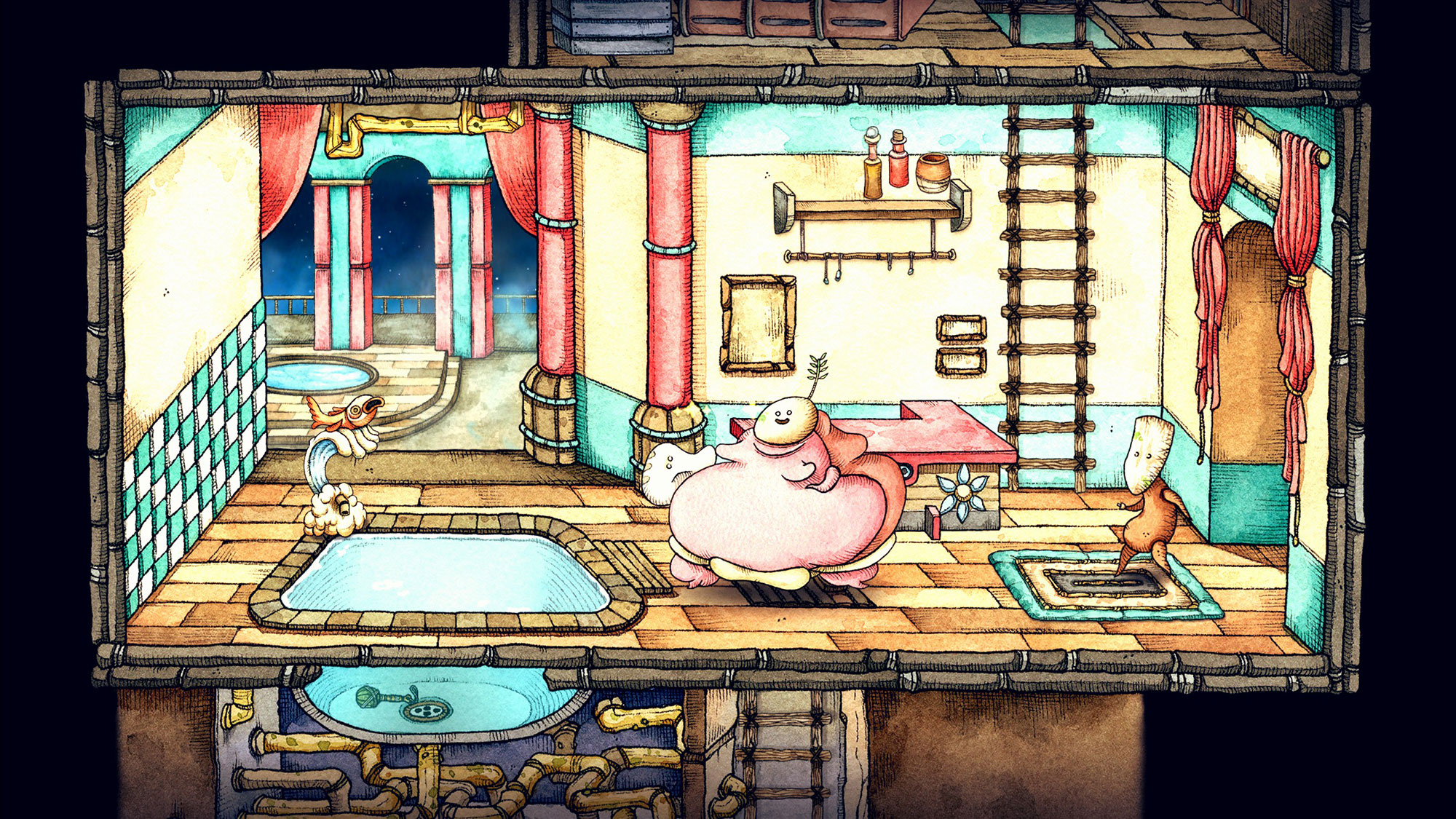 The animation on this character is quite something…

One of the key things that attracted me to Candle was the handmade art style they had gone for. It is highly reminiscent of Machinarium but the lengths they went to in order to get that style are extraordinary:

“We paint the entire graphics of the game with watercolors and ink, and then we scan all that stuff in order to build the sprites of the environments, items, menus, etc. Also, the animations of every character and animal in the game are not digital, instead we draw and paint them frame-by-frame, then we scan every single image and build the spritesheets for the animations. Once we have all this working in Unity 4, we set up each level, each scene and each character and so we get a nice handmade look for the visuals” — Candle Kickstarter page

This looks like a painstaking process but it really pays off with a beautiful art style that is unmatched by other games that fake this digitally. It is well worth watching the short video they put together to show off how they produce this style.

You’ll notice that I’ve bought up the point-and-click genre several times despite there being no actual pointing and clicking within Candle. The reason I’ve done this is because of the feeling the game evokes, not just from its puzzle-based roots but due to the music that has been composed by Pascual Gállego. Due to budget, an orchestra wasn’t used so everything was synthesised with MIDI leading to a soundscape that is highly reminiscent of the point-and-click games of the ’80s and ’90s. There were several sections which took me straight back to Discworld II to the extent that I thought it might be the same composer (it isn’t).

Another area where my ears reminded me of another game was with the narrator who sounded an awful lot like the narrator in the Trine series. In this instance, this is more than just a similarity as it is the same voice artist, Terry Wilton. His narration is spot on with a great voice for telling the increasingly unsettling story. 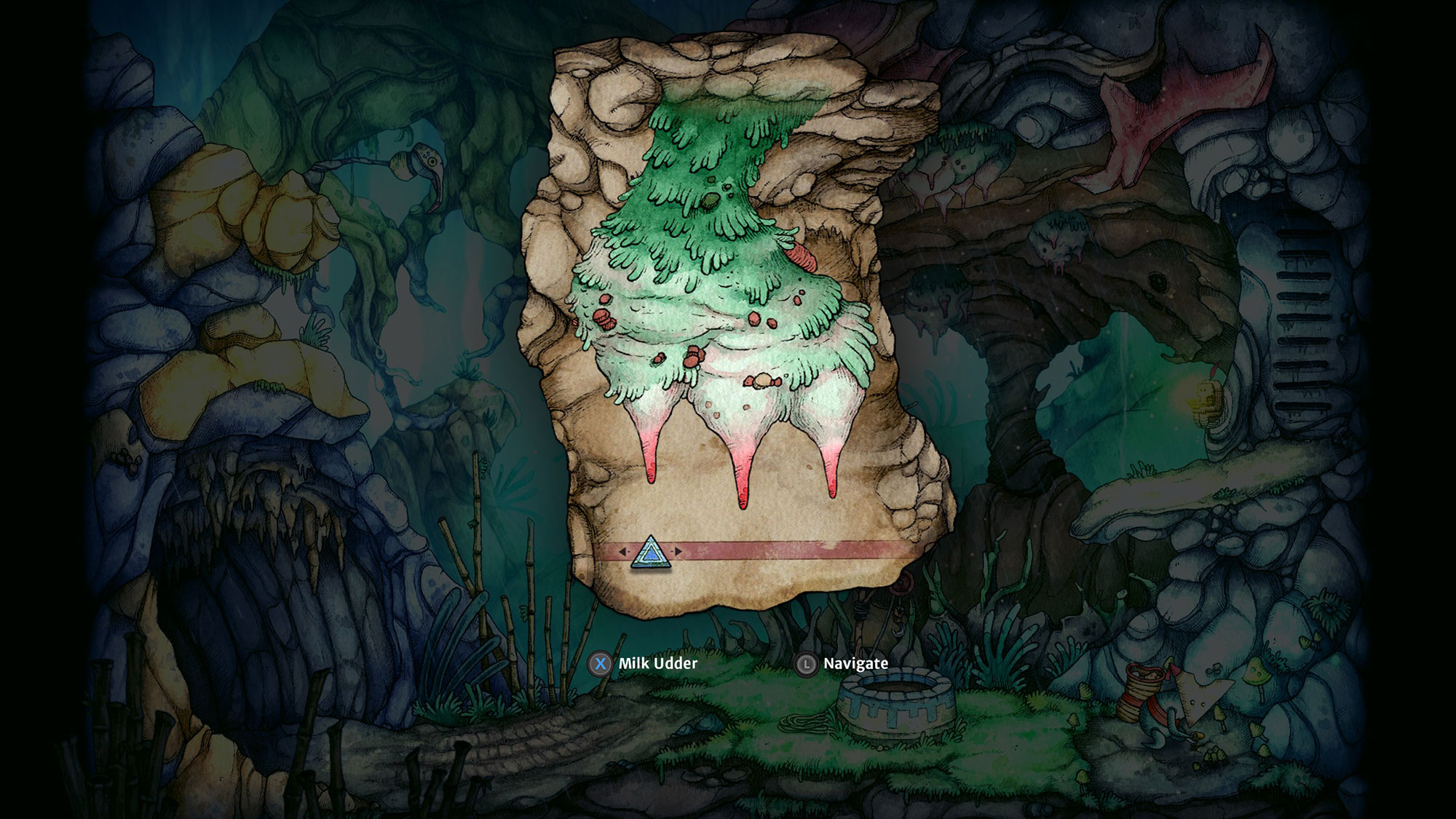 I don’t think I want to milk that…

There were a few areas of Candle that I felt could be improved. First of all, the resolution setting didn’t stick between play sessions and defaulted to a low 1280x720 on my ultrawide monitor. It wasn’t a huge hardship to switch it to 2560x1440 after opening the game but it was mildly irritating. I also noticed a lot of the UI was fuzzy at 1440p as it looked like some buttons or assets had been designed only at 720p or were being stuck at that resolution. Whilst the majority of the game ran at a smooth 60fps, there were a few juddery instances when transitioning between scenes, especially in one complex transition early on where you go through a cave and the background zooms into the foreground.

I’ve mentioned a similarity to Machinarium several times and this extends to dialogue in the game which is generally conveyed through thought bubbles that show concepts in the form of icons. For example, a character you are speaking with may appear in a bubble with a question mark next to an item that they need. This works well from a user point of view but is also clever from a developer perspective as it means you don’t need to localise the content. Except, after these nice little vignettes the narrator then pops in and basically tells you what you’ve just watched which is very odd and makes me wonder why they didn’t just go for one or the other. This sort of thing also bleeds into the cutscenes which are far too long and can’t be skipped leading to large amounts of time being shown the slowly unfolding story rather than discovering it through play. This isn’t a huge problem in the grand scheme of things as the narration and the story are excellent but there are times when you do just want to get on with the game.

The biggest problem for me is that some of the puzzles required you to find completely hidden areas which are almost impossible to see. There were two points in the game where I spent ages trying to work out what to do before turning to a guide and finding out that going behind a particular bush would then reveal an item I needed. This is massively frustrating as it isn’t relying on you working out a puzzle, it is just hiding things in an art style which already heavily blurs the difference between something that can be interacted with and something that is just scenery. I hate having to use a guide in games like this but I especially hate it when the solution is due to a flaw in the design rather than being an obtuse head-scratcher. 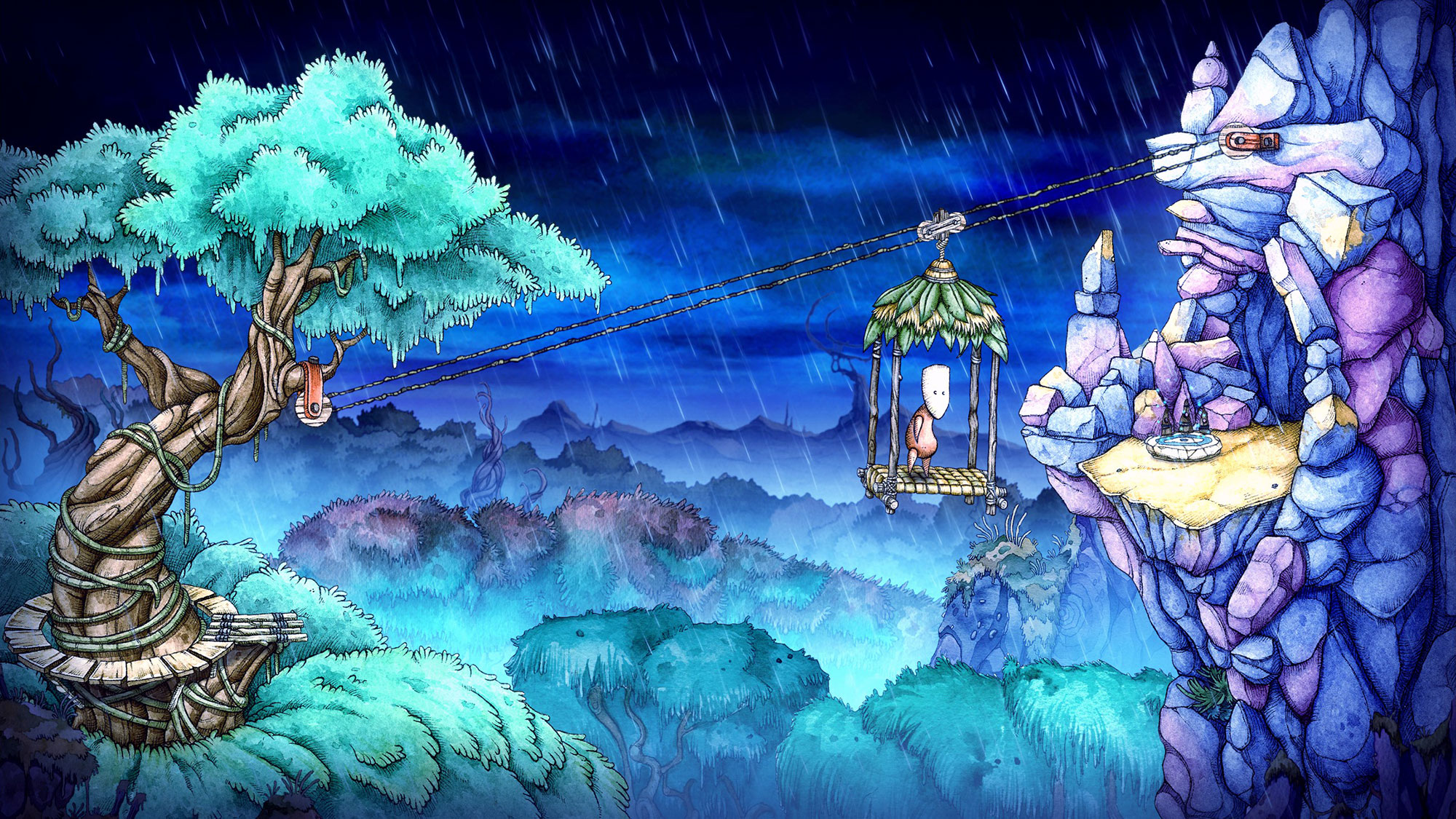 The final thing to mention is that the game has been announced as coming to the Wii U:

“Also, we have recently been approved as official Wii U developers, so we are designing exclusive features for Candle on that platform. We love Nintendo platforms since our childhood has been full of them, so it was natural for us to go for it. We are already thinking about dedicated gameplay on Wii U - we are not doing any kind of quick port. We will design specific gameplay features for its gamepad: all the menus, inventory and minigames will be tactile-controled on the touchscreen, as well as other unique actions concerning Teku’s candle.” — Candle Kickstarter page

Obviously the Kickstarter was formed in 2013 but the premise of having a slightly different version of the game that is optimised for the Wii U’s second screen experience is really interesting to me. As of May 2016 the development team said that it had been put on hold in favour of the PC version but they’d be working on it after release. I haven’t seen any more communication on that front but I would assume they would be ditching the Wii U version for the Switch instead. If that were the case, I can definitely see myself playing this again on the Switch in future.

I massively enjoyed the 7-8 hours I spent playing Candle even though some of the timed jumps and hidden puzzle areas caused frustration. I normally consider around 3 hours of game time from a £15 indie title to be good so to get almost 8 hours from an £11 game is exceptional. Pairing this with the delightful soundtrack, professional narration, interesting story, and a beautifully crafted art style and I can throughly recommend this to anybody who enjoys platformers and puzzles.