Ben says: "It's a freemium top down Clash of Clans set in the Titanfall universe. That I managed to get addicted to it for 20 hours means it did something right but I can't for the life of me think what!"

I am not usually one to play freemium games. Having run my own for many years, I know all of the psychological tricks that are designed to part the player from their money. It is incredible to me, then, that I’ve managed to put over 20 hours into the one-armed bandit that is Titanfall: Assault.

I can only think that this is due to the Titanfall wrapping that has been applied to this Clash of Clans style mobile game in which the usual freemium tricks of timers, login bonuses, and clan rewards are par for the course. There is little that is innovative here but I am a sucker for anything with the Titanfall logo on it as my 700+ hours on the core games on Xbox will attest. 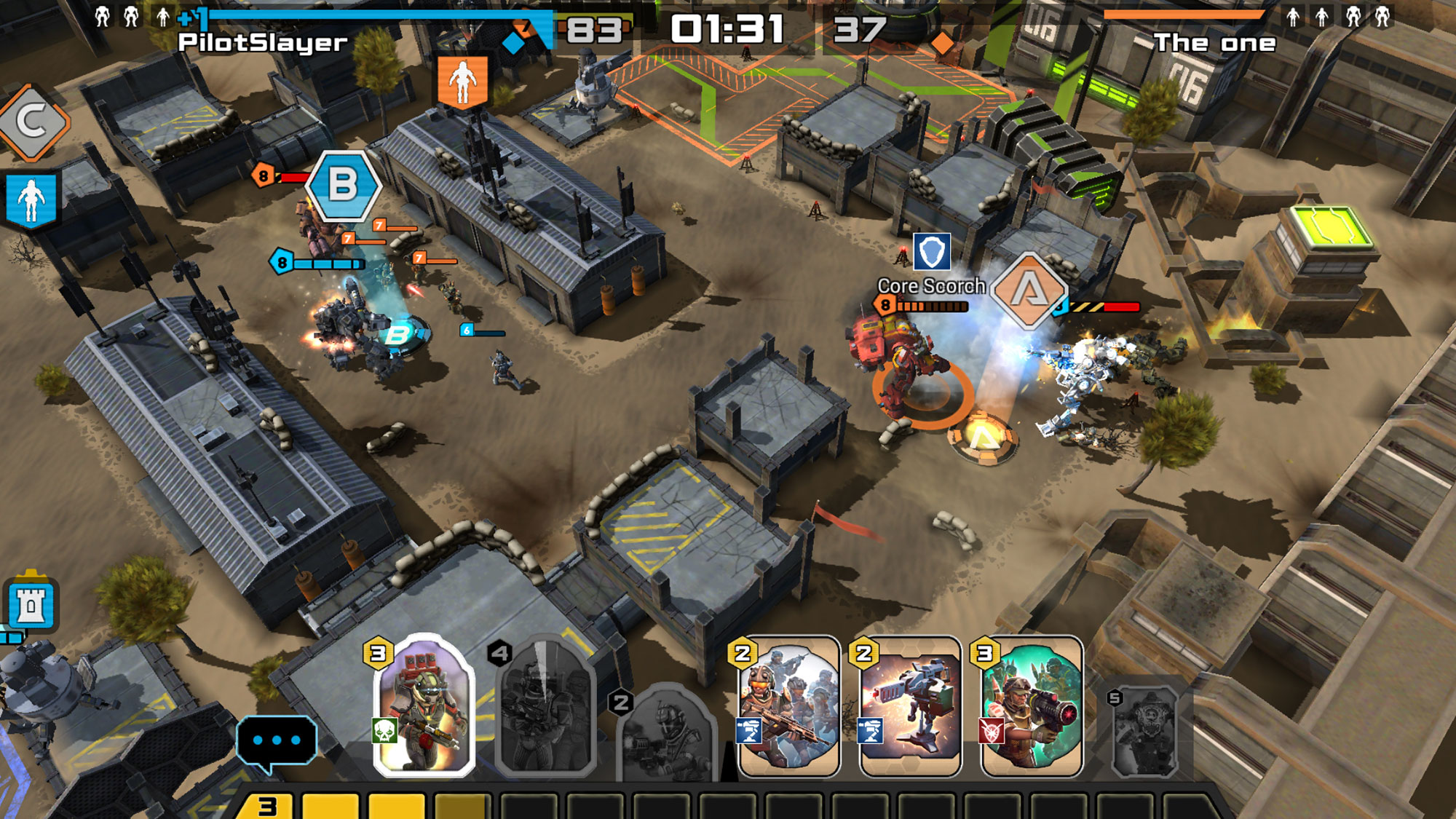 Titanfall: Assault is a mobile-only freemium game in which you battle against other human players (or AI if you want to practice) in a game of hardpoint domination. As with the ‘proper’ Titanfall games, hardpoint is a collection of 3 points on a map that your soldiers must capture and then defend; for every 3 seconds that you hold a single point you’ll gain 1 point. If enemy soldiers capture the point, then they start to gain its benefit. The first player to 100 points is the winner. To add a different tactic to the game, you can also destroy the opposing players base turret for 100 points instantly winning you the match although this tends to be significantly harder.

As with other competitive games of this ilk, you don’t actually control individual units as you do in a RTS such as Command & Conquer or Cossacks so much as drop them at a specific point and hope they do the right thing. They rarely do. Given a unit the choice between fighting a pyro pilot from a distance or up close within his fiery surroundings and the grunts will go for the fire every time. Poor fools. 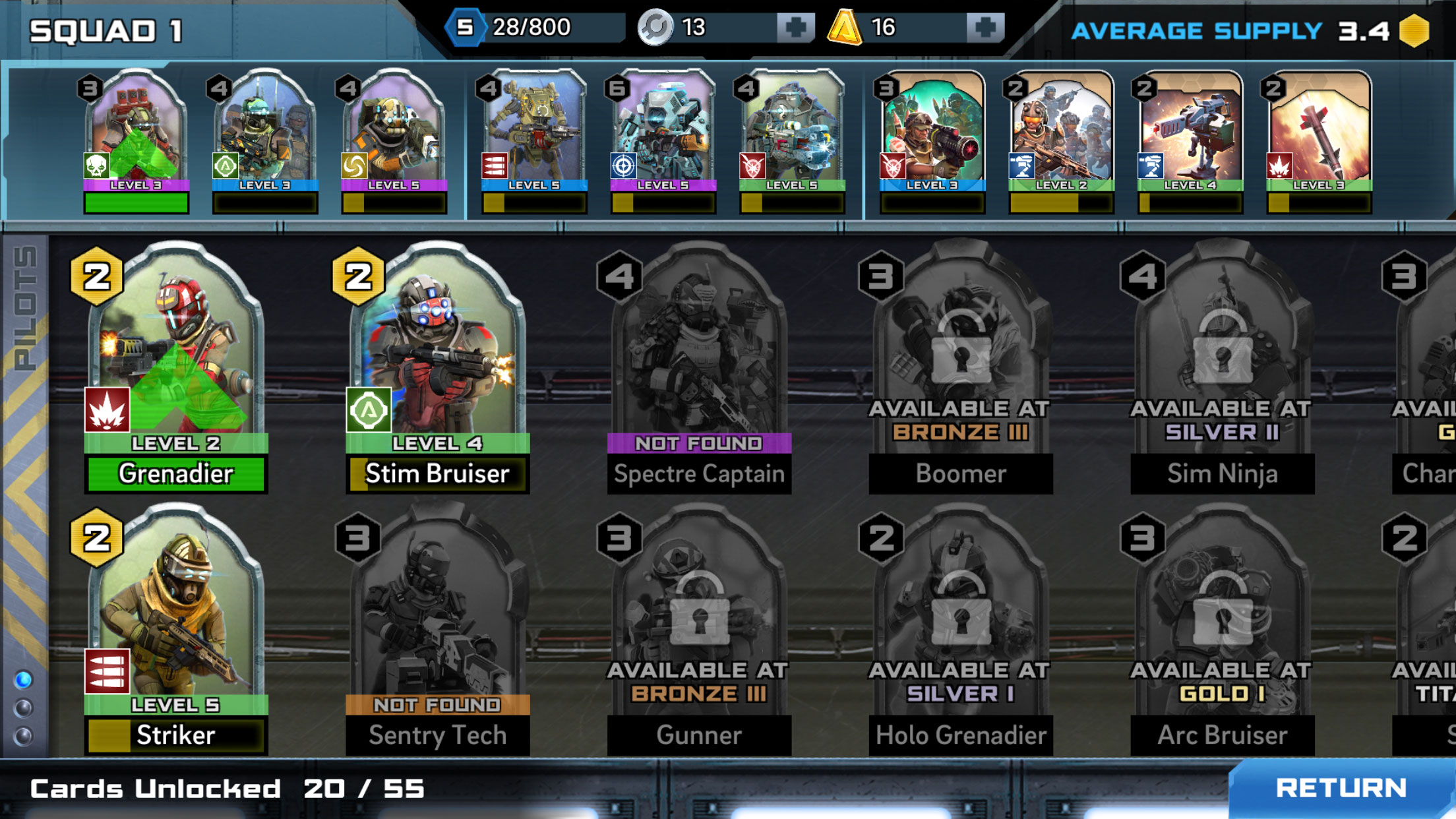 Your squad is made up of pilots, titans, and… miscellaneous

The game is fundamentally based around a concept of cards of which you use 10 to build up your squad; 3 pilots, 3 titans, and 4 burn cards which will be things like sentry turrets, single use missiles, or grunts that can be dropped in to secure a hardpoint. I found this card-based system to be rather ironic bearing in mind that Titanfall 2 dropped this from the original Titanfall formula.

Each match is played through in phases with the first half being mainly pilot and burn card based whilst the second half will lead to your burn cards mainly being replaced with titans. You are randomly given cards from your stack of 10 to play with and each one has a supply value that must be met before you can activate it; a supply meter fills up through the match and there is a single supply drop a couple of minutes in which gives you a sudden influx for a quick burst of action plus a 30% speed increase in supply for the rest of the match.

You collect cards by opening caches that are earned from winning a match or by opening the app every 3 hours. The caches you earn typically have a timer of 2-10 hours that it takes for them to open but you can of course pay extra to speed up that process; you can also pay to buy a cache of cards that you can open immediately and be fairly sure of their contents. Collecting multiples of a single card will lead to it being levelled up to a total of 20 levels although getting to that level with a single card would take hundreds of hours or hundreds of pounds - your choice. You can join guilds to get an objective every so often that will net you a few extra cards and there are daily goals that will usually give you a cache of something fairly decent.

In addition to the cards, you yourself have a player level that increases the more games you play which unlocks extra maps and AI commanders to fight against. I also feel this is the core item that is used for matchmaking (so you are likely to always be playing people similar to you in terms of time played). There is also a trophy rank which is a fairly standard ranking system of gaining lots of points if you win a match and losing a few if you lose. This is likely also used for placement and increasing up the ranks will give you new rewards and unlock new types of cards. For example, getting to Silver III will unlock the Ronin and Arc Ronin titans whilst Gold I will unlock the drones that were added in a recent update - you don’t just get them, you’ll have to find them in the various caches, but they at least are added to that lottery pool.

It should go without saying that there are two currencies within the game that can be used and help obfuscate the amount you pay should you go down that route. Credits are the soft currency that you get fairly frequently and are used to buy cards from the market (that increase in price the more you buy) whilst tokens are the hard currency that can be converted to credits, used to speed up timers, or can be spent on specific caches of cards. Finally, there are fixed price caches that have a theme such as defensive turrets, fire titans, or shield-bearers that will generally give you a shit-ton of specific cards and some credits and tokens. 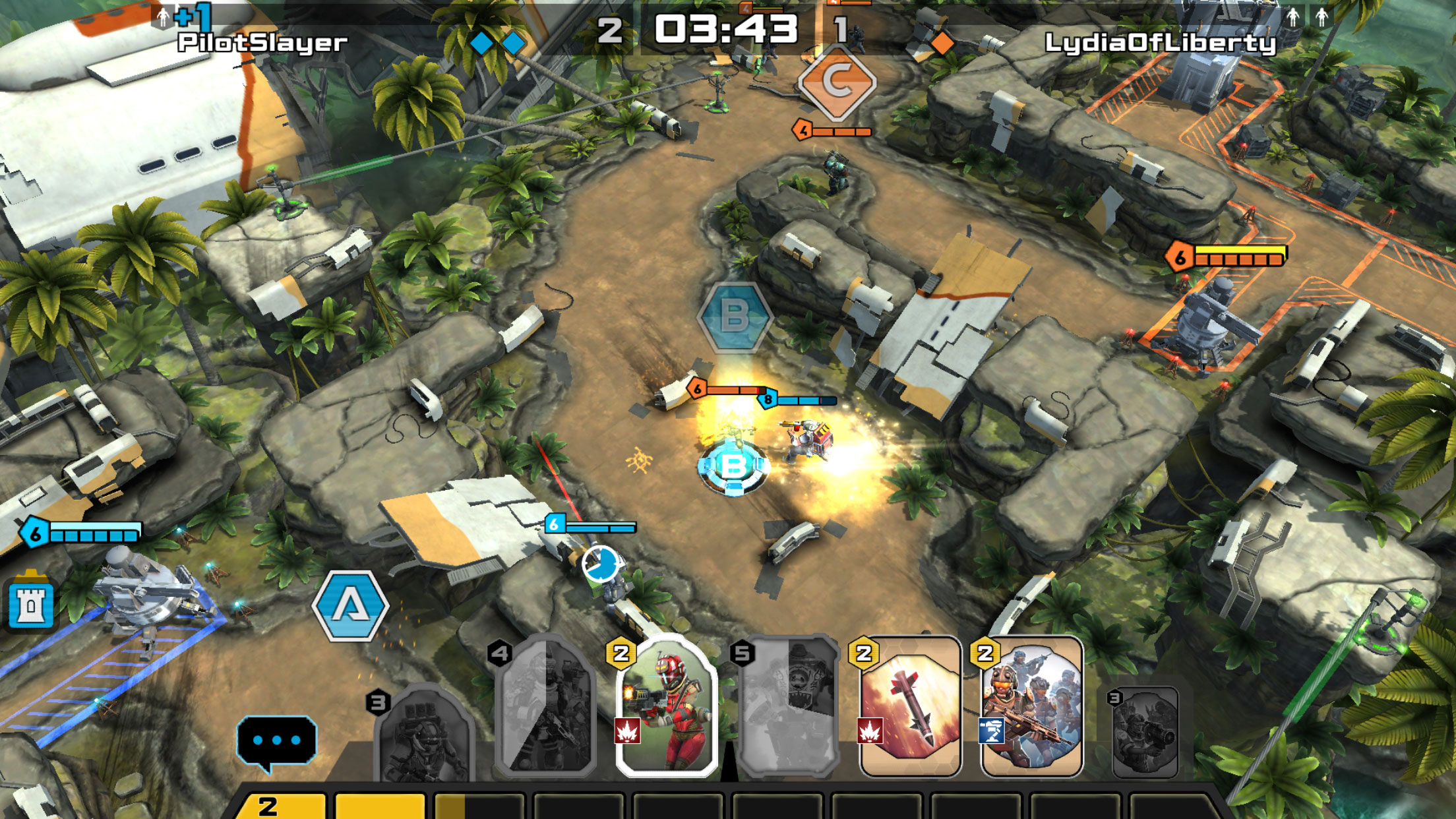 The pyro pilot is a good choice for an opening gambit

The first issue you’ll run into with Titanfall: Assault is the size of it. Whilst the initial download is 125MB, once you open the app you’ll be stuck with a loading indicator which downloads another 1GB of data. Beyond that, the largest issue by far is the constant reminder that everything you do is being sent to a server. If you open a cache there will be a brief pause as the server explains what is inside; if you try and edit your squad there will be a pause as the server checks what you have available; if you try and look at what objectives are available, the game will hang as the server checks your guild. These are all excusable although there are a number of “smoke and mirror” tricks the developer could use to make these transitions less jarring.

The second issue is the sheer number of connection problems and failed matches you’ll try to start. In the beginning I just assumed this was teething problems as unexpected demand led to their low server number being overwhelmed but even weeks after launch I only end up connecting to a game one in three times and that can take over a minute to start! This is not what you want from a mobile game that you are likely to dip in and out of. Compounding the problem is the ridiculous timeout that is allocated to match connections; the screen will literally be locked out to you whilst matchmaking and it typically takes 2-3 minutes before it gives up and returns you to the main menu. On one memorable evening I had 12 of these in a row before I gave up.

The biggest issue is the fundamental nature of a freemium game; the more you pay, the better you’ll do. I gave in and spent £5 to get a beginners bonus of a few tokens, credits, and caches in order to get some decent titans. This then put me at the same level as the other people I was up against who had similarly spent around £5 to get various bonuses that simply aren’t available to the non-paying player. There were a few matches that I’d describe as fair – pitting similar squads together – but the majority of them were either uneven in my favour or in my opponents favour. If somebody has several level 8 rare titans against your level 6 titans then you are likely going to lose. Similarly, if they have high-level shield grunts and bombardments, your regular grunts and turrets aren’t going to do much damage. There isn’t really a way around this; if you’ve played the game for more than 10 hours then you are likely not going to mind spending a few pounds to make yourself much better and that is really the trick in a game like this. It’s a parlour trick where you are always being goaded into spending more rather than a game of real skill. 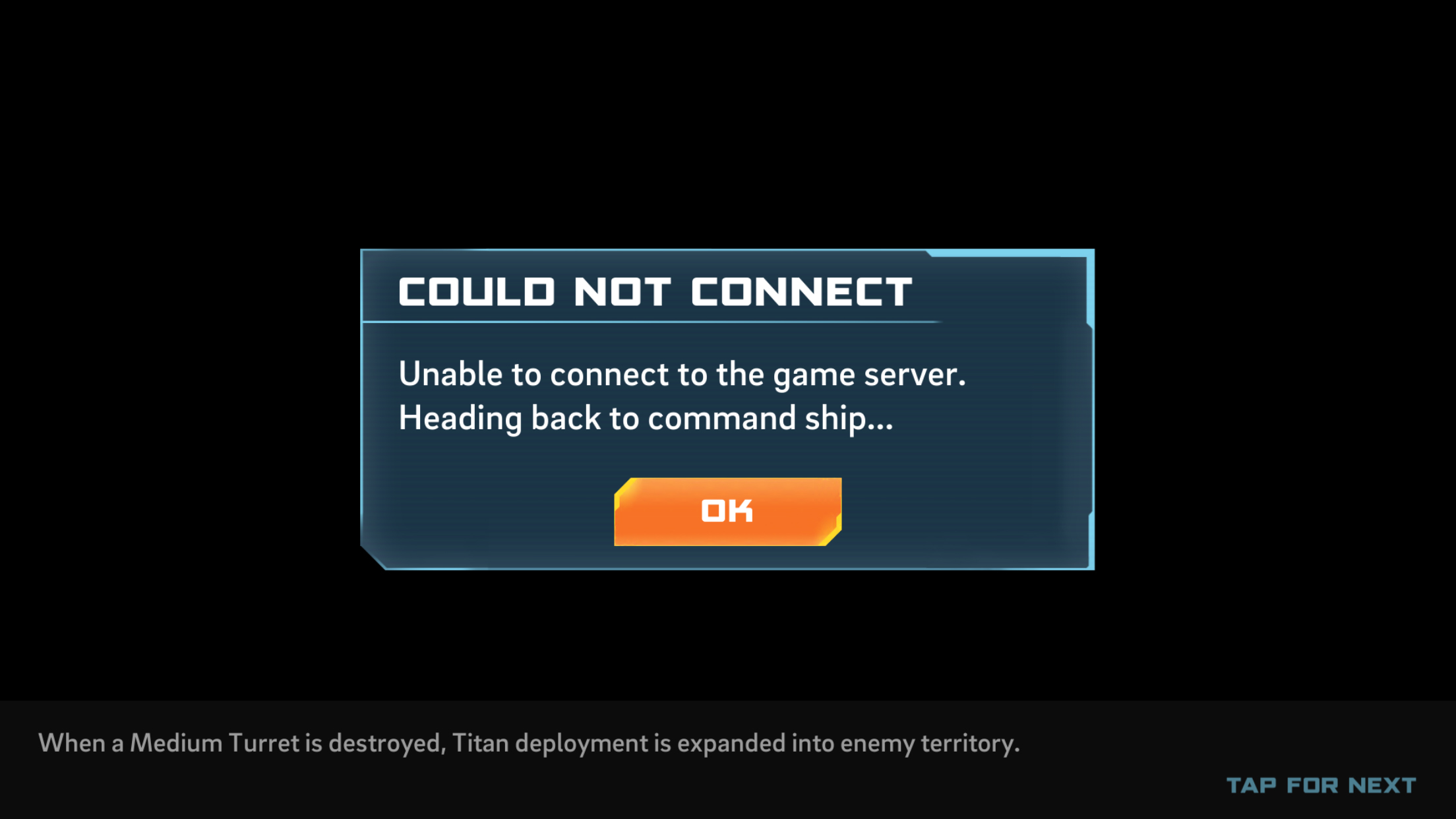 In summary, Titanfall: Assault is a standard freemium clan-based player vs player game with a Titanfall veneer applied replete with ways to make you part from your money and a complete dependency on a solid internet connection. Despite this, I still enjoyed over 20 hours of gameplay (of which only 5 hours was probably matchmaking errors) which I can’t quite square with my recollection of that time.

Was I overtired and in need of something to sooth me to sleep? Was the lure of the Titanfall brand too much to resist? Am I more susceptible to the wiles of the freemium casino owner than I thought? I’m not sure. What I do know is that this would be an incredibly good single or multi-player experience for a fixed price without all of the timer-based freemium bollocks that is unfortunately synonymous with mobile. Had this been available as a standalone game on Xbox for £15-20 then I would have snapped it up. As it is, I’ve had my fill and don’t think I’ll be returning to this particular Titanfall game. A pilot can only suffer so many connection errors and prompts to part with his cash before he instead loads up Titanfall 2 on a real gaming device.