Ben says: "Whilst it is a bit ropey in places, the joy of having GLaDOS berate you is something that can't be beaten. I have many thoughts on how this game could be improved but I'd still recommend it to anyone (although probably on iPad over PC)."

It’s hard to believe that it has been 7 years since Portal 2, especially now the original games are outnumbered 4 to 2 by spin-off titles1. The latest of these is Bridge Constructor Portal which slaps some updated visuals and sarcastic comments on the Bridge Constructor formula of “build things to get from A to B”. That isn’t to say there aren’t some innovations to the game (most notably the irony that you rarely build a bridge) but it is essentially a GLaDOS coat of paint on what has existed before. 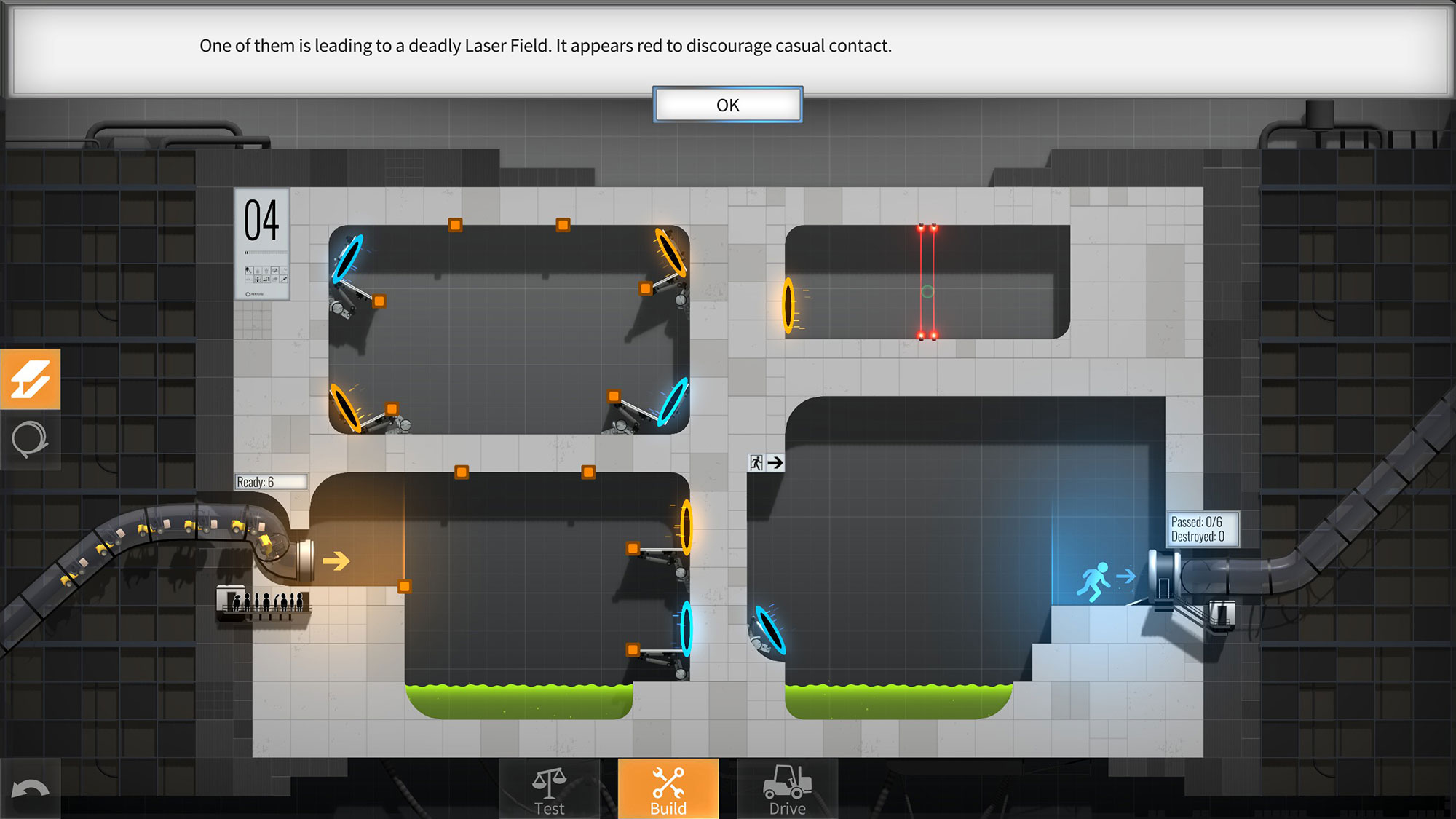 The 2D build view is vaguely reminiscent of Portal: The Flash Version

On each of the 60 levels you’ll need to successfully get a test car from the starting point to the exit tube. This invariably involves building constructions to get your car to the various linked portals dotted around the chamber and delivered safely2. Once complete you can move onto the next test chamber or you can choose to send a convoy of vehicles to see if your design holds up to greater scrutiny; this is the better of the modes as you have to be able to withstand the added weight of multiple vehicles and deal with the vibrations that can occur in your design (which may have been fine with the first vehicle but cause the second or third to bounce off course).

In terms of building, the usual formula of connecting building blocks to each other and some fixed anchor points remains although it is more akin to the freeform Bridge Constructor Stunts than the original games where you literally crossed a ravine. There are only two components with which you can build; struts and ropes. The struts are akin to scaffolding but you can click each individual part to convert them into a surface suitable for driving on. They are limited in length so you have to connect them to anchor points and build stable structures, mainly with a triangular formation, in order to keep them up. The ropes are slightly different and are designed for suspending platforms where a side-to-side construction isn’t possible or to add extra sturdiness in the form of a suspension bridge; they are also not limited in length like the struts are. There is a cost involved with using each part but unlike the original Bridge Constructor there is no limit on how much you can spend per level. This is fairly short-sighted as it means you can brute force the levels with a mass of parts rather than the more careful planned approach of the original title. It also makes the ropes fairly useless as you can just extend down from the ceiling with steel whereas in the original title you had to make use of ropes in order to keep costs down. 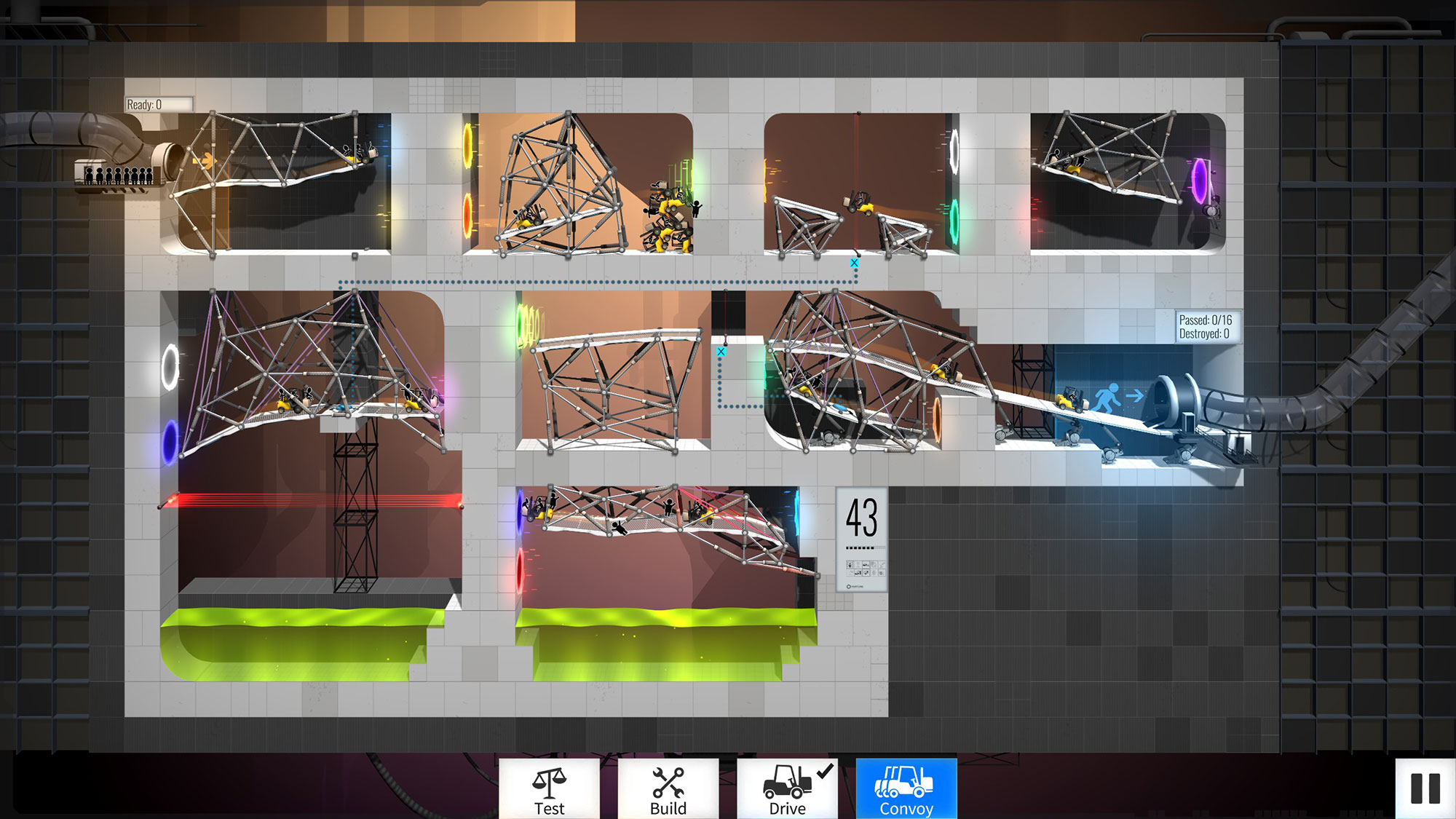 Along your path you’ll find plenty of obstacles. Firstly, and most obviously, are the portals themselves. You don’t have access to a portal gun so each one is fixed in position but there can be as many as 8 different pairs per chamber each linked via a different colour similar to the multiplayer mode of Portal 2; this requires you to plot a path through multiple smaller chambers and sometimes double back on yourself if there are other puzzle elements in the way. These other elements can vary from simple buttons to open doors, buttons that require a weighted companion cube, turrets that will fire if you go too close to them, and a host of other things that will destroy you from laser walls to acid lakes.

The puzzle elements are very well thought out and work well despite the fact that you are interacting with them via construction rather than a portal gun. For example, in the original Portal games you’ll frequently come across energy balls that need to be redirected via portals into a receptacle to open a door out of the chamber. The same happens here but instead you need to build platforms that the ball will bounce off of in order to open the door that will allow your car out (whilst also building the path for the car itself and making sure the car and ball do not meet).

The 60 playable levels are broken down into 10 level sets with a cutscene between each showing your lab technician getting various upgrades in his office. There isn’t much point to this and the 10 level sets aren’t unified by a single theme in the way that the co-op campaign of Portal 2 was. GLaDOS will pop up occasionally with some comments but she isn’t there throughout. It was a shame that there weren’t a few pre-canned lines for use when your design fails or you get to a certain point of a build as at the moment she is just used when starting certain levels. 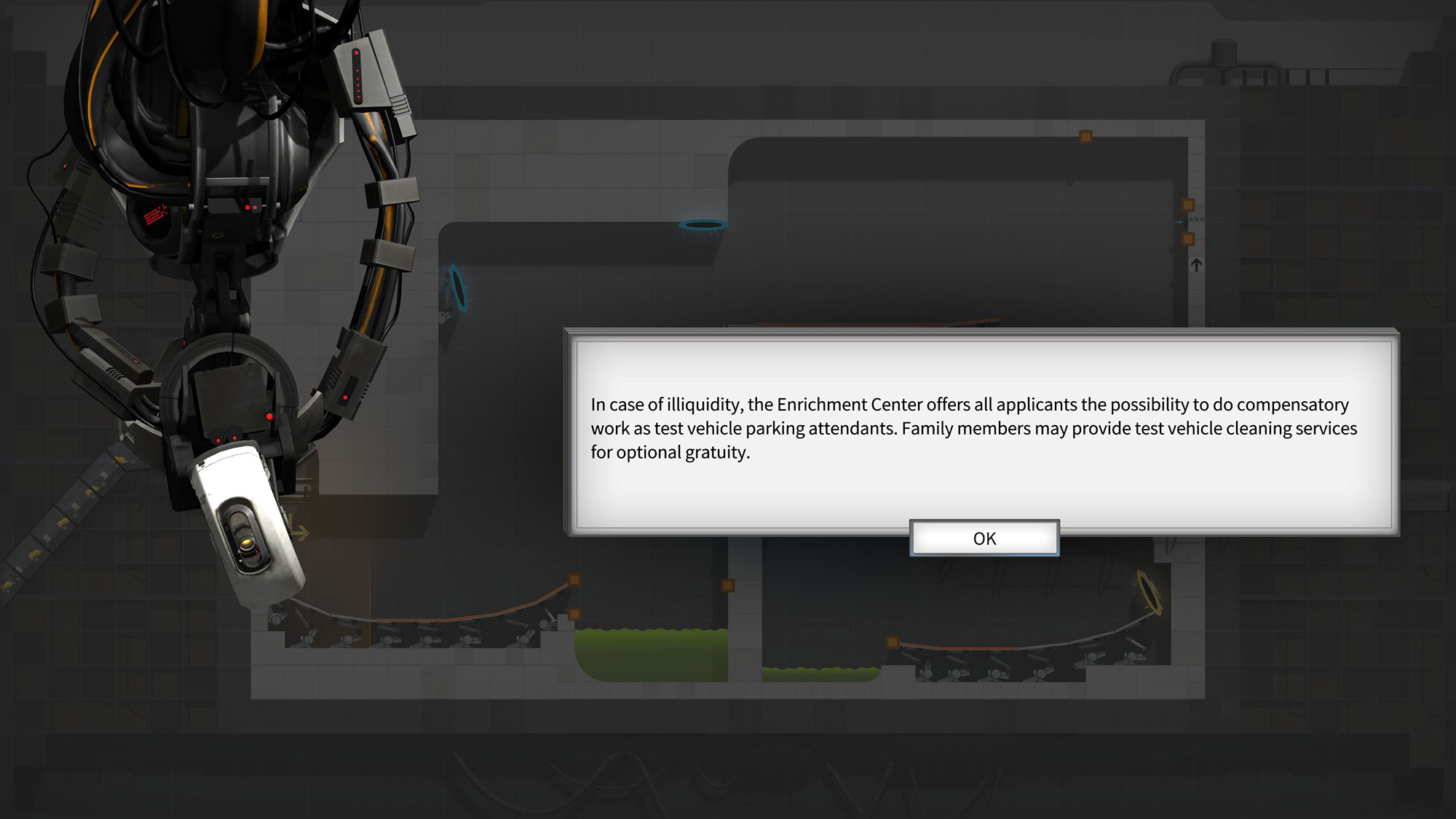 Ah GLaDOS, how we missed you

Whilst the gameplay is fairly solid, I do have a few niggles with the concept. I mentioned earlier that parts have a cost but you have an unlimited budget; this is a shame as it means there is no real reason to improve your designs and it makes things a little too easy. It seem strange that there isn’t an optional mode to enable a limit on each level or even a “par” score. My preferred update would be to add a 3-star rating depending on how close to budget I was similar to something like Angry Birds. The other issue is that the introductory tutorial is fairly basic and just shows you how to make basic triangular pointed bridges without an explanation of why these are the most solid structure. There is a guidebook you can dip into which explains a few different structure types but it is fairly light and doesn’t help at later stages. This is better than the original Bridge Constructor which was severely lacking in detail but it feels like a missed opportunity, especially when this could be a way of making physics fun for younger players.

In terms of specific platform bugs, there are a few issues with the Steam version. The v1.2 update on 2nd January was supposed to add “support for 21:9 screens” but the option doesn’t appear to be there meaning you are locked to 1440p. I ran into a number of issues with the steam overlay and elements such as achievement notifications and the FPS counter blending into one another. There are several achievements available ranging from simple level completions to bouncing through the same portal 30 times but nothing to really make you want to replay or improve your designs beyond getting a convoy through.

On the positive side, the design and graphical work is much improved over previous Bridge Constructor titles and I particularly like that you build in 2D but then it transitions into a pseudo-3D mode for the actual test drive. The convoy mechanic is also nice and slightly more akin to the Trains DLC for Bridge Constructor than to the truck method albeit with more that can go wrong on the levels where paths criss-cross. 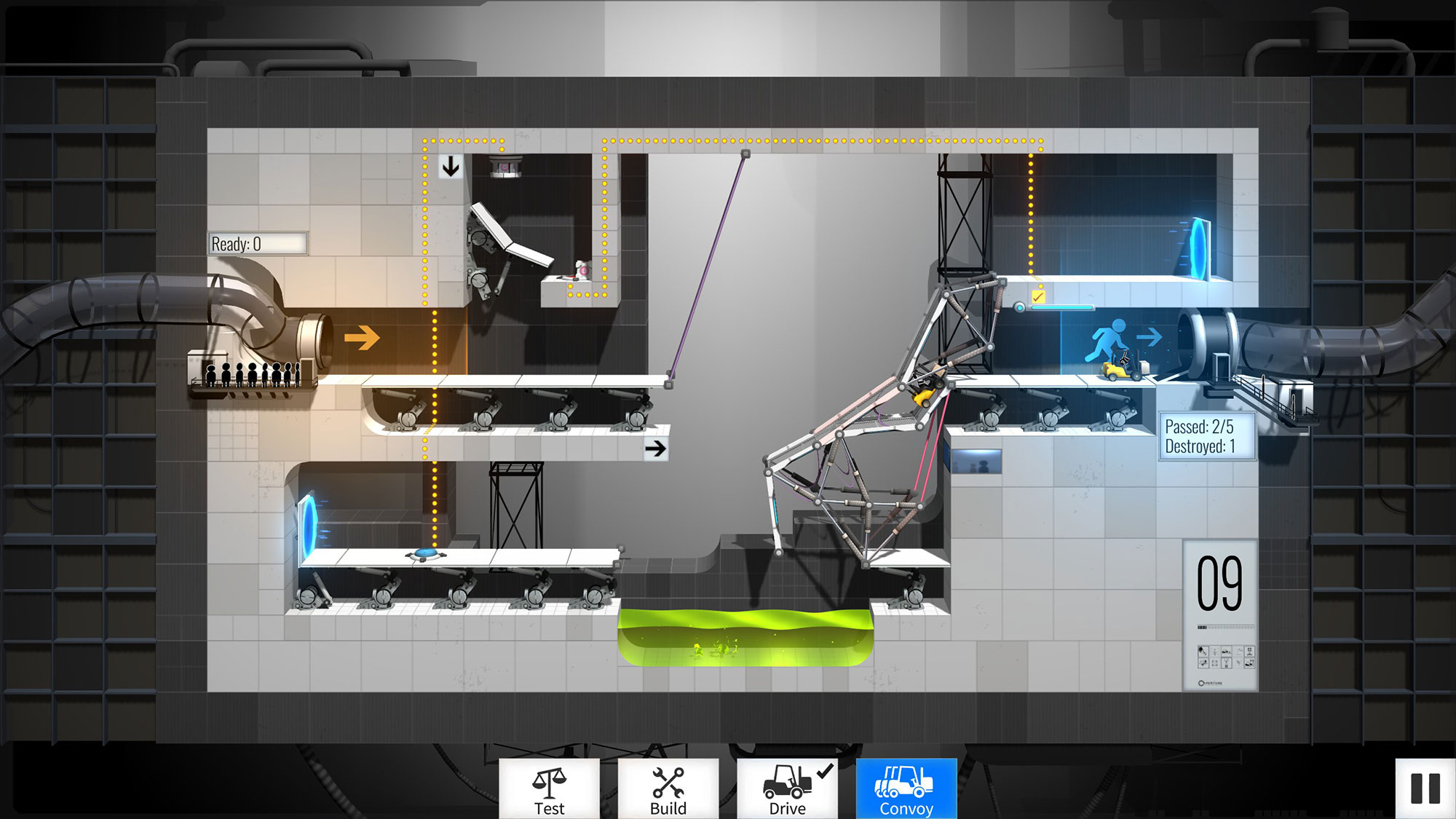 It took me just under 8 hours to complete Bridge Constructor Portal and for the most part I enjoyed myself. There are places where it gets a little repetitive and the lack of a cap on parts meant that sometimes I felt like I was cheating as I brute forced more steel into a design. This is definitely the best Bridge Constructor title available but it is probably the least polished of the Portal spin-offs. As it stands, it is neither terribly challenging nor particularly educational and I can’t help but feel they should have leant harder in one direction or the other.