Ben says: "A short but fun introduction to point and click games with a pixel-art vibe and excellent music from FTL composer Ben Prunty. The free Christmas-themed DLC gives it just enough playtime to recommend."

Described as a “micro-adventure game”, The Darkside Detective is essentially an old school point and click chock full of jokes, geeky references, and a hearty disregard for the fourth wall. 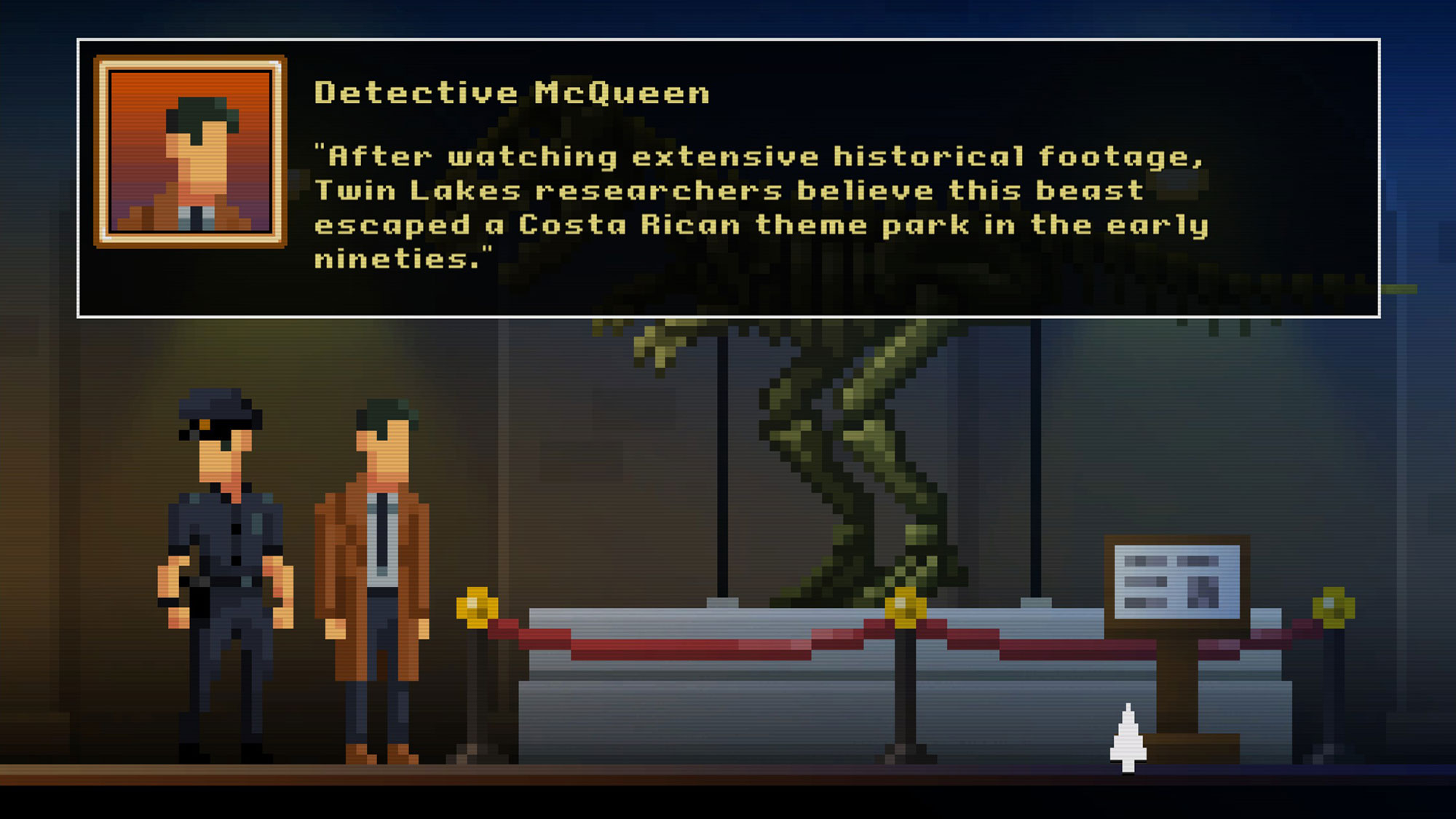 If you’re in your 30s like me, prepare for a lot of references to films you watched as a kid

You play as Detective Francis McQueen, the lead investigator of the Darkside Division of the Twin Lakes City police department. Together with your sidekick, Officer Patrick Dooley, you’ll need to investigate a number of disturbances from spooky goings-on with the underground trains or a gremlin infestation at the police station. There are six standalone cases for you to crack with a seventh Christmas-themed story that was added for free more recently. The interesting thing about the cases is that they don’t reuse locations; each one starts in a new part of the city for you to explore. In practice, each area is made up of about 10-15 interconnected screens so they aren’t huge locations by any means. This is made more clear from the play time with each case taking around 30 minutes or less to solve.

Mechanically speaking this is a straightforward point and click with people, items, and doorways to interact with. Dialogue is straightforward in that you’ll have a number of questions you can ask the various characters you meet and sometimes this list will expand depending on other things you have found. As you roam around a location you’ll find various items that can be examined; doing so will give you some text and then you may be able to add the item to your inventory in the top left-hand corner. Using these items is just a case of dragging and dropping them on a character (including yourself) or on other items in the world or your inventory. Finally, doorways can be clicked to take you to the adjoining screen. There is no movement or scrolling locations so getting around tends to be fairly fast. 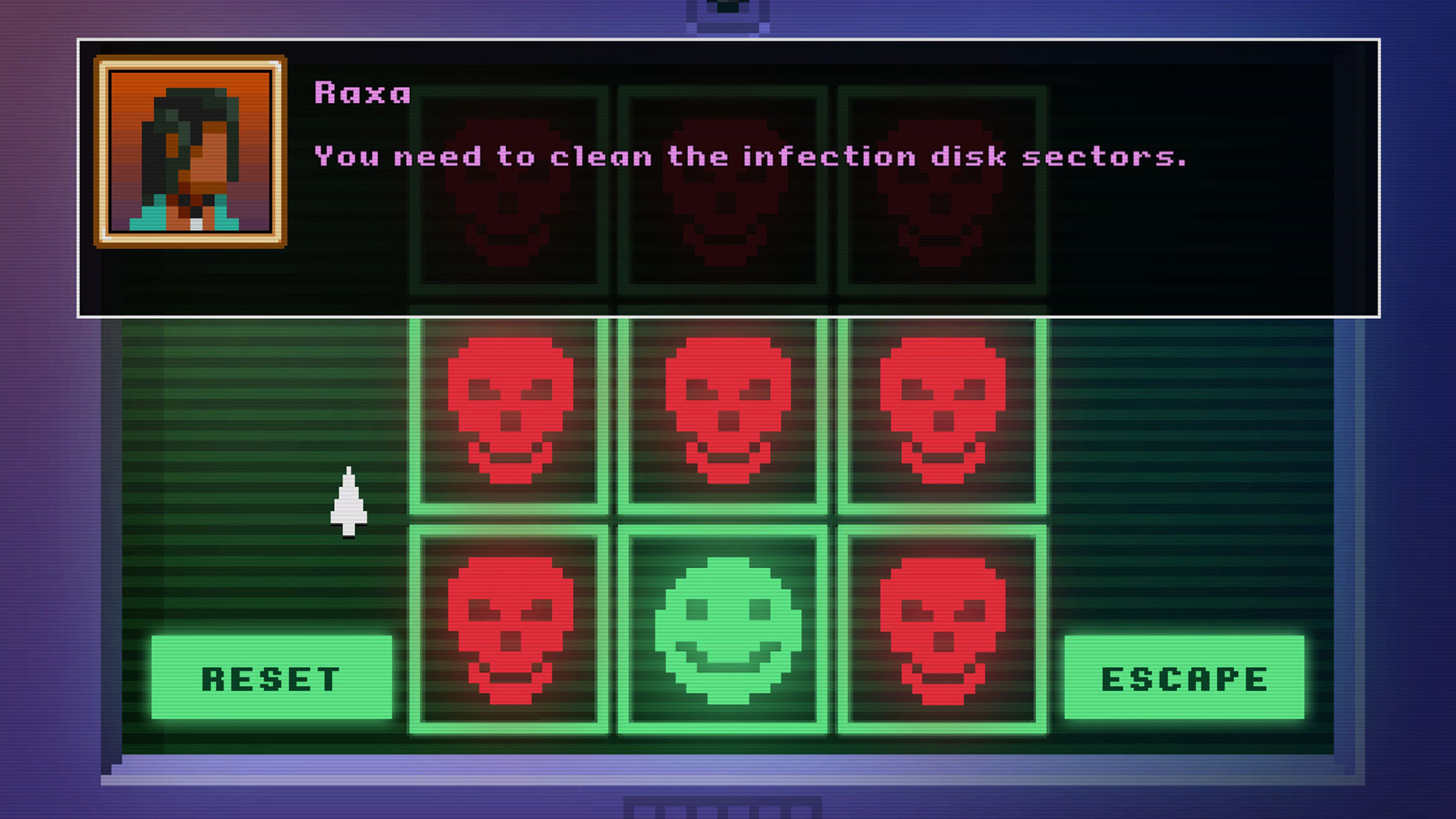 Aside from the usual “get item A and item B to get past obstacle C” style of puzzle, there are also a few mini-games dotted throughout the cases. These are of varying difficulty and quality and include a game of life simulator, a zombie version of Pac-Man, a church-based version of Space Invaders, or a simple “find the right key to match the lock” puzzle. None of these are especially hard to complete but they remind me of the way that platformer Pinstripe is broken up with simple spot the difference puzzles; it is sometimes nice to give your analytical mind a rest with something more simple. 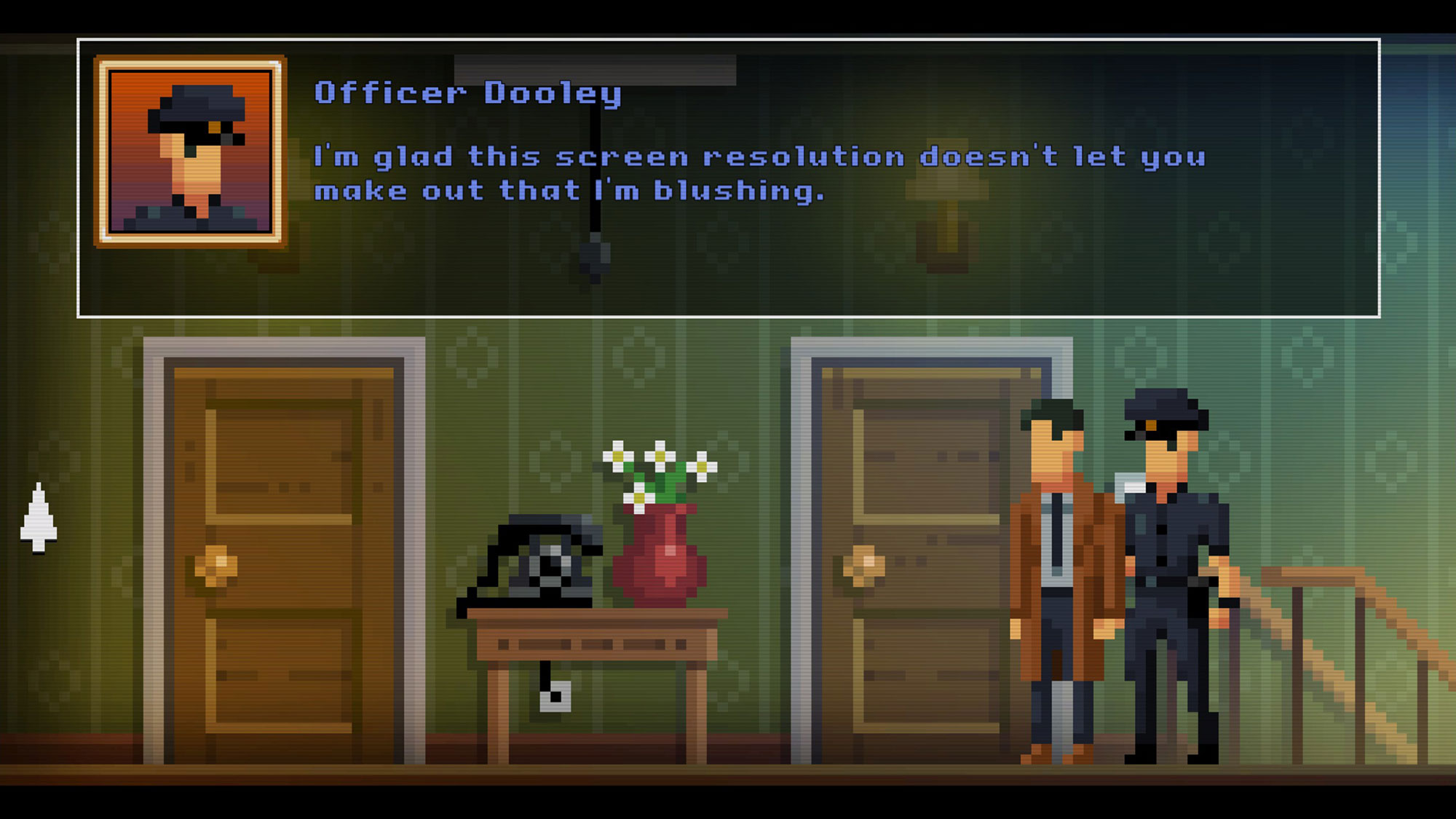 In terms of aesthetics, The Darkside Detective has a lot going for it. I’m not usually a big fan of the retro pixel style but the way in which they’ve done it with far larger pixels pays off. The lack of ability to do fine detail means that characters don’t actually have faces which means you don’t have to worry about conveying emotion or lip syncing; this works incredibly well as you can just rely on the writing to do the heavy lifting. That isn’t to say that the game isn’t beautiful; the modern use of lighting on the pixel-based artwork works wonders and definitely gives weight to the maxim that you can do more with less.

As regards music, developer Spooky Doorway went with the big guns and hired Ben Prunty, the composer of such games as FTL: Faster Than Light and Gravity Ghost. In the same way that FTL isn’t the same if you have the audio muted, so too is The Darkside Detective which has a similarly “out of this world” style soundscape. Whilst the soundtrack isn’t available on streaming services, I purchased it through Steam as it makes for wonderful background music. I honestly can’t say enough good things about the music aside from to say that Prunty has done it again. 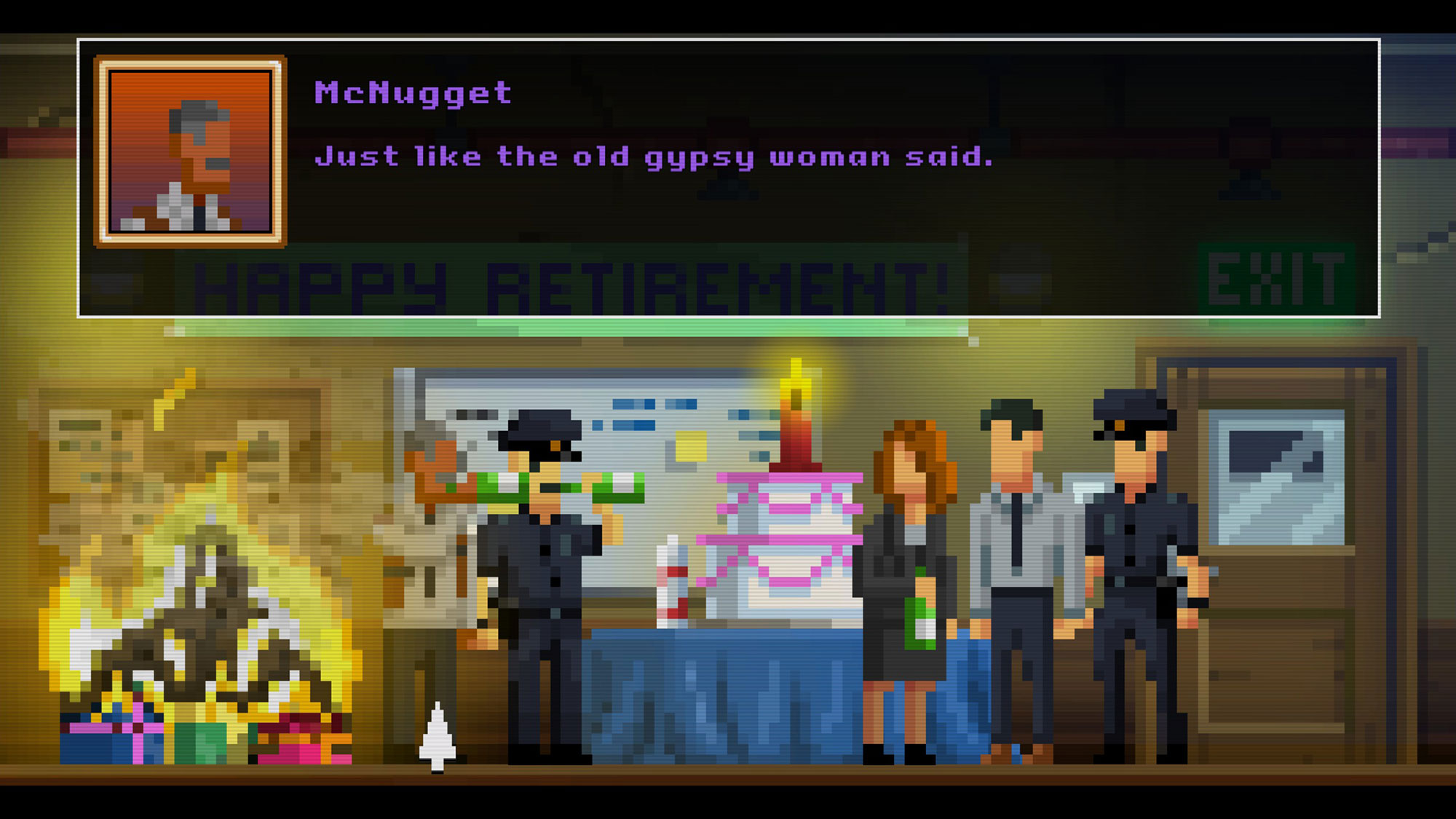 Every game should have this line in it

I didn’t really experience any issues or bugs with the game save that it isn’t optimised for a 21:9 screen (although this is to be expected for a game of this genre). There are a couple of things that may seem odd to seasoned point and click adventurers. Firstly, your characters don’t actually move; you click to go through doorways but there is no movement animation nor are there any scrollable areas like the graveyard in Thimbleweed Park or the alleys of Ankh Morpork in Discworld. This means that your character doesn’t need to move in order to interact with any items although occasionally there may be an animation such as a firing a grenade at a gremlin. The second oddity is that there are no red herring items. Sure, there are items you can’t pick up that you think might do something but you never get items in your inventory that don’t have a use in solving puzzles. I found this made the game far easier as you were never lured into thinking you had a solution only to find out it was a useless item; instead, puzzles clicked very easily making for a much simpler game.

I played through the entirety of the original six cases in a single sitting lasting just over 2 hours. When I’d finished, my overriding feeling was that I loved the game (despite it being relatively easy) but that it needed just a bit more content in order to get a solid recommendation. Fortunately a day later there was a free update that added a new Christmas-themed case entitled “Buy Hard”. This bought my entire playtime up to 3 hours and was an enjoyable Christmas romp that had several clever puzzles whilst also bringing back characters from the original cases. I thoroughly enjoyed it and it helped make this a much easier recommendation. 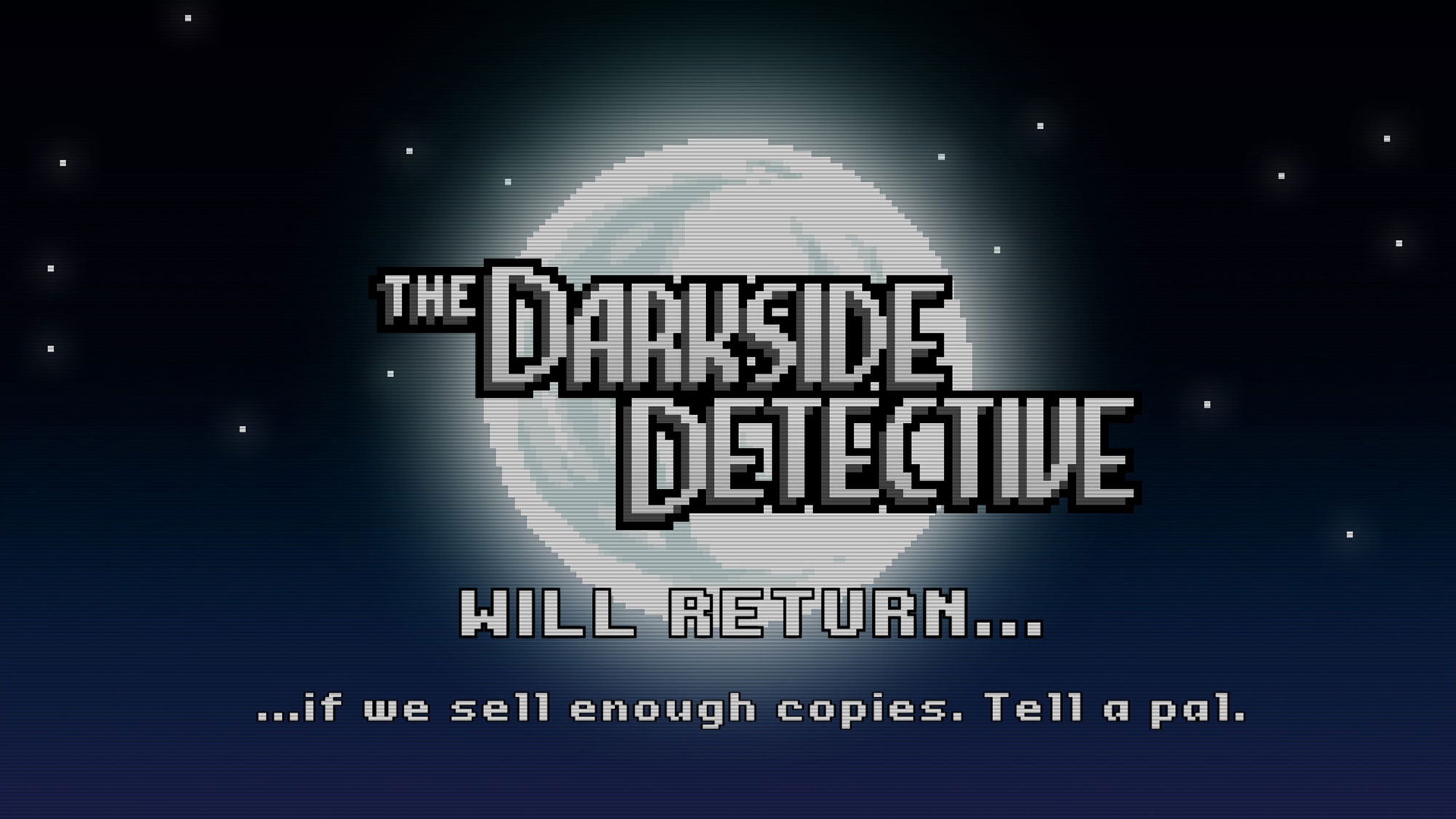 Though nowhere near as difficult as some of the predecessors it riffs on, The Darkside Detective is a fantastic introduction to the point and click world for beginners whilst providing a few hours of fun for those that are old hands. I sincerely hope they’ll add more adventures as the amount of content is the only thing holding it back from a much more solid recommendation but for now I could recommend this to nearly anyone. I’m not sure how well the point and click mechanic will extend to the Switch and can’t help but feel this might have worked better on iPad after PC but I guess we’ll see if it gets released on other platforms in the coming months. That said, this is an incredibly strong outing from developer Spooky Door and I’m incredibly excited to see what they do next.