Ben says: "A peculiar little "game" that tried and failed to make me laugh. If you like children's TV from the '00s and you prefer your point-and-click to be like turning the page of a book rather than something mentally taxing then this is for you."

Chuchel is a tricky game to describe. Amanita Design – the developers behind such popular games as Machinarium, Samorost 3, and Botanicula – call it a “comedy adventure game” in which you must help the titular Chuchel (a hairy little monster) retrieve a cherry with both the help and hindrance of a little mouse-like creature called Kekel. In practice this is a series of point-and-click vignettes more akin to a children’s TV show than it is to Amanita’s previous works. 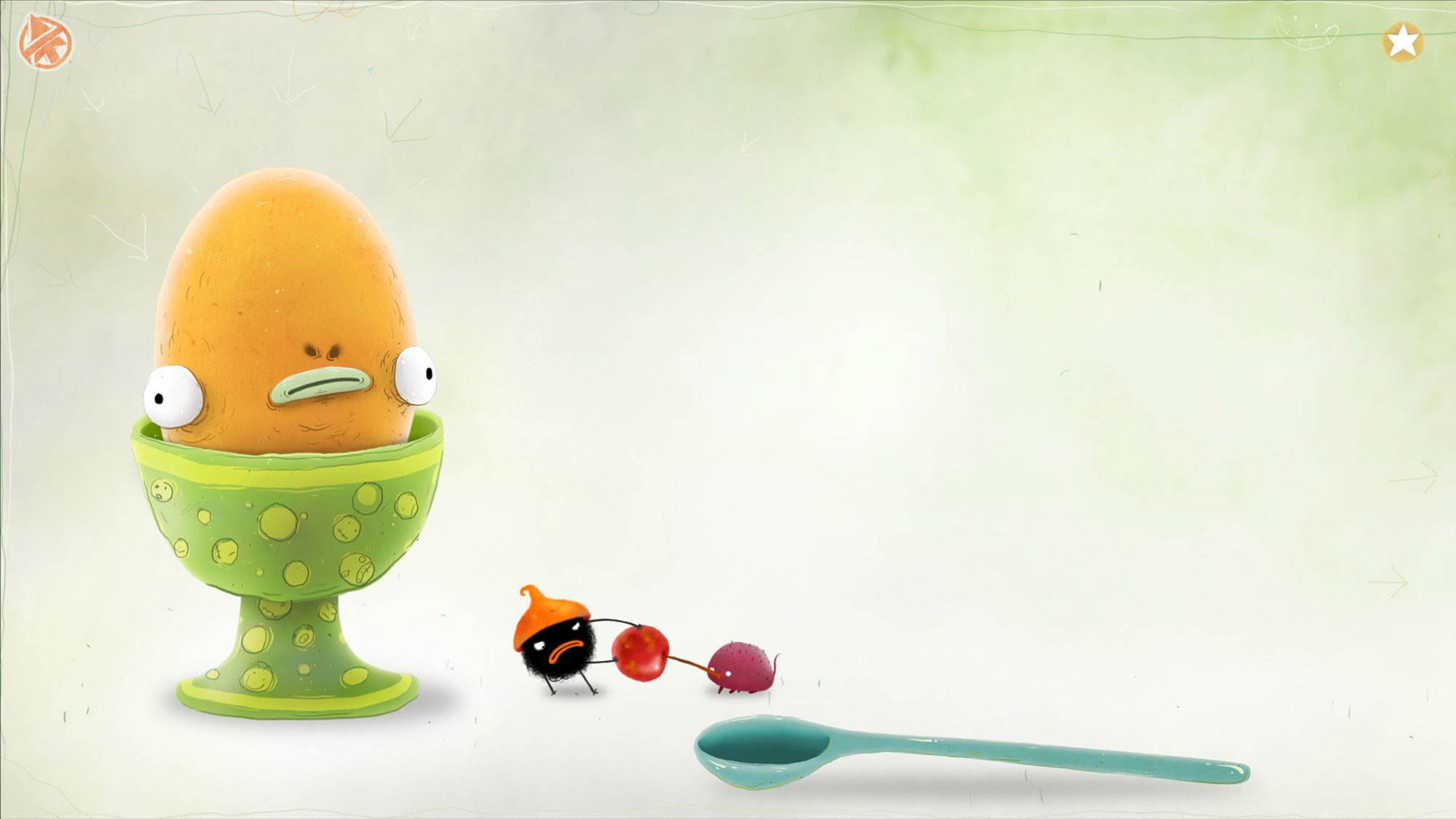 I did genuinely laugh when I saw this egg thing

With a design aesthetic reminiscent of such varied works as The Oatmeal, Monty Python, and Cirque du Soleil, the real issue I had was that it just didn’t make me laugh. I enjoy a bit of randomness and some slapstick but this was a step too far and seemed like something that would grace CBeebies rather than something from the studio behind one of the greatest point-and-clicks1. Whilst playing, I jotted down a single note that said “childish circus”, a note that felt more and more apt as each slap of a character was graced with yet another rimshot. Add to that the irritating babble, screams, and facial expressions of the Minions2 and you reach a point where your eye starts twitching and your headache reaches a new stratosphere of pain. The final nail in the coffin is that at the end of each skit all of the characters start to dance around to music straight out of an ’90s kids show. Even worse, something “hilarious” will happen and the logo “CHUCHEL” will appear in big letters feeling slightly like the word of the day in Sesame Street; this happened around 20 times.

Comedy is a varied spectrum and what some people enjoy, others dislike so your mileage may vary. I’m usually amused by most things but to me the whole thing felt aimed at a much, much younger audience or to those unfortunate souls amused by Mrs Brown’s Boys. 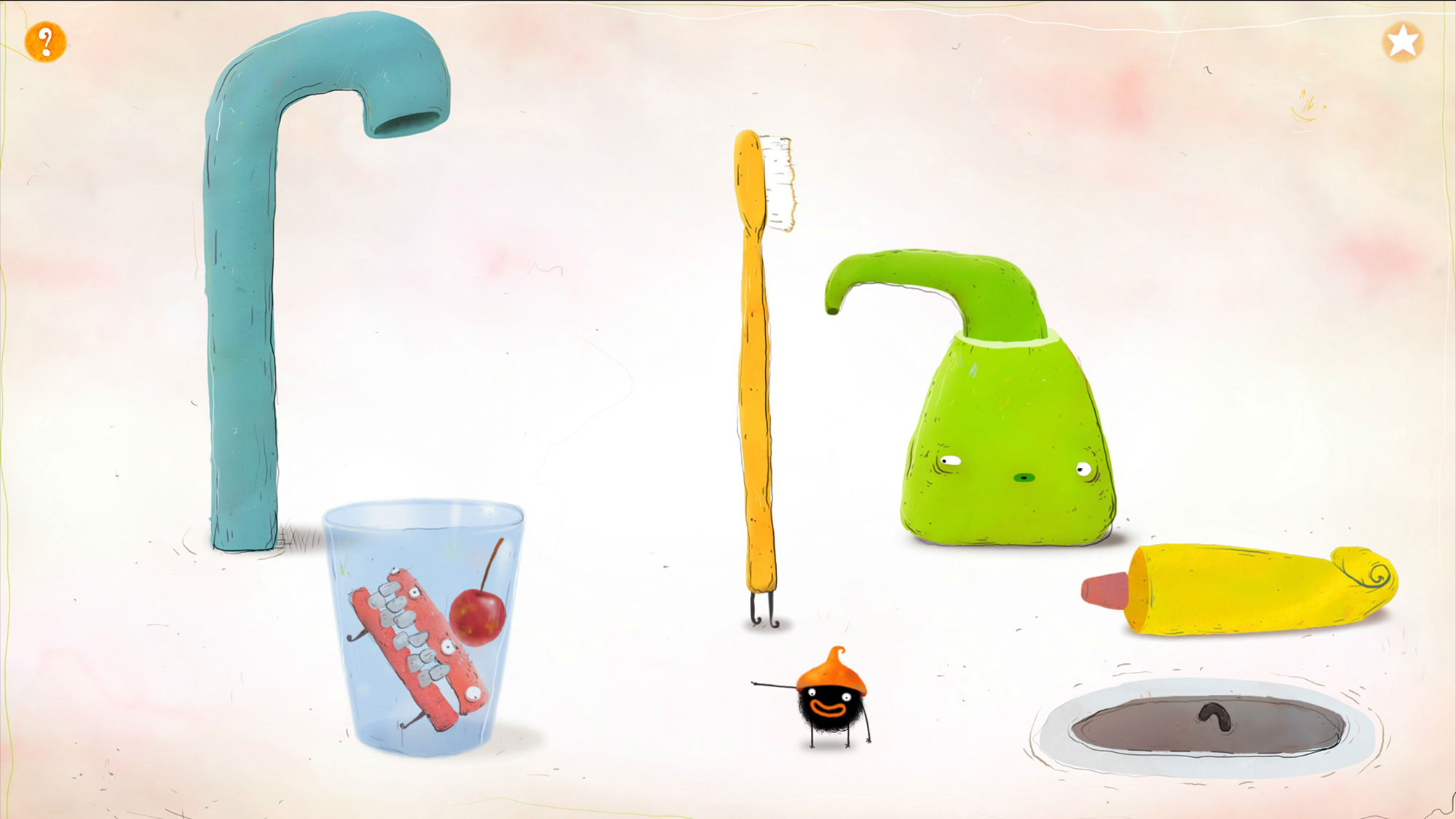 This was a pretty interesting puzzle, but with limited pieces it isn’t that difficult

Comedy aside, the gameplay is also not what one might expect. Chuchel takes all the usual point-and-click ideas such as explorative areas, basic inventories, and a weaving narrative in favour of 30 detached scenes each containing a basic puzzle. Sometimes the puzzle is as simple as clicking on someone a few times. Sometimes you need to click them a lot of times. In others, there may be a simple mini-game to complete such as their own twist on Pac-man, Space Invaders, or Flappy Bird. These games are a fun little diversion but they are clearly built for keyboard with a little icon appearing in the top left to show that it would be easier that way. I hadn’t noticed this at first and so struggled through my first level of the Pac-man clone with the frustrating mouse controls. There are also some games which can be beaten by just spamming the keyboard buttons left and right making them rather pointless.

The real issue is that there is often no clue as to what you should be doing nor any real information conveyed by the interface. If you click on an object, you’ll usually be given a few icons in a Machinarium style but I struggled to understand what many of them would do. The outcomes were also fairly arbitrary and often just for comedy effect. There were far too many situations when you needed to go through all of the interactions with an object before a new option would appear which was the correct one. That isn’t a puzzle, it’s a conversation that you can’t walk away from. The lack of a “skip interaction” button was frequently annoying if the same interaction was clicked twice and you ended up having to sit through another 10 seconds of slapstick animation. To add insult to injury, the game also drops in a hint signpost that tells you how to solve the puzzle if you don’t do it quickly enough, with “quickly enough” being roughly 3 clicks. After progressing some way through a bathroom puzzle, that signpost dropped in just after I’d clicked a new element that appeared for the first time. I don’t know if this is because Chuchel is aimed at a younger audience who may not get what is happening but it felt like the game was telling me to hurry up, not a great idea when the total play time is just shy of 2 hours. 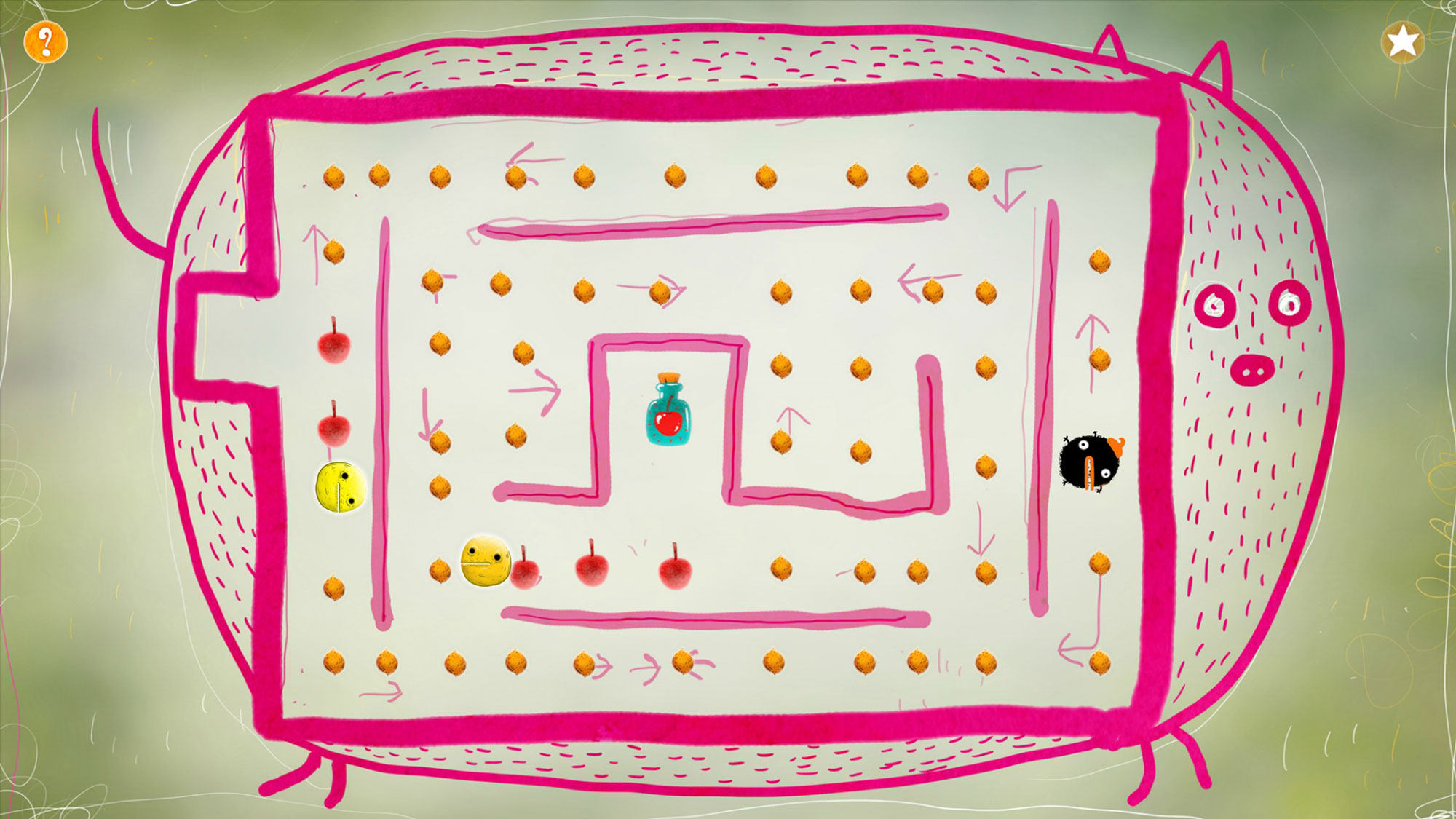 A nice version of Pac-man with super frustrating controls

On the flip side, Chuchel does do a great job with a lot of its artwork. Some of the characters that appear are amusing before they do anything and the animation work is also very good in places. I particularly enjoyed the bright colour palette which felt straight out of a children’s book. That said, there are places where it feels a little janky and more akin to an early ’00s flash animation which probably isn’t a surprise given the heritage. There were also several fuzzy assets which felt a shame as I was only running at 1440p; in some instances this may have been due to an aggressive depth of field blur but it only made the flash comparison seem more accurate3.

There are seven achievements to unlock along the way but they have no description even when unlocked so I’ve no clue what I did to earn the two that I did pickup. There are a few cases in the Steam forums of achievements not working at all so it may be that more should have unlocked; regardless, they don’t merit a second playthrough or a more careful exploration of the game especially as spending any more time interacting would just lead to more hint signposts. For a game that leans heavily on its graphical work, it was a shame that there weren’t any Steam trading cards available. 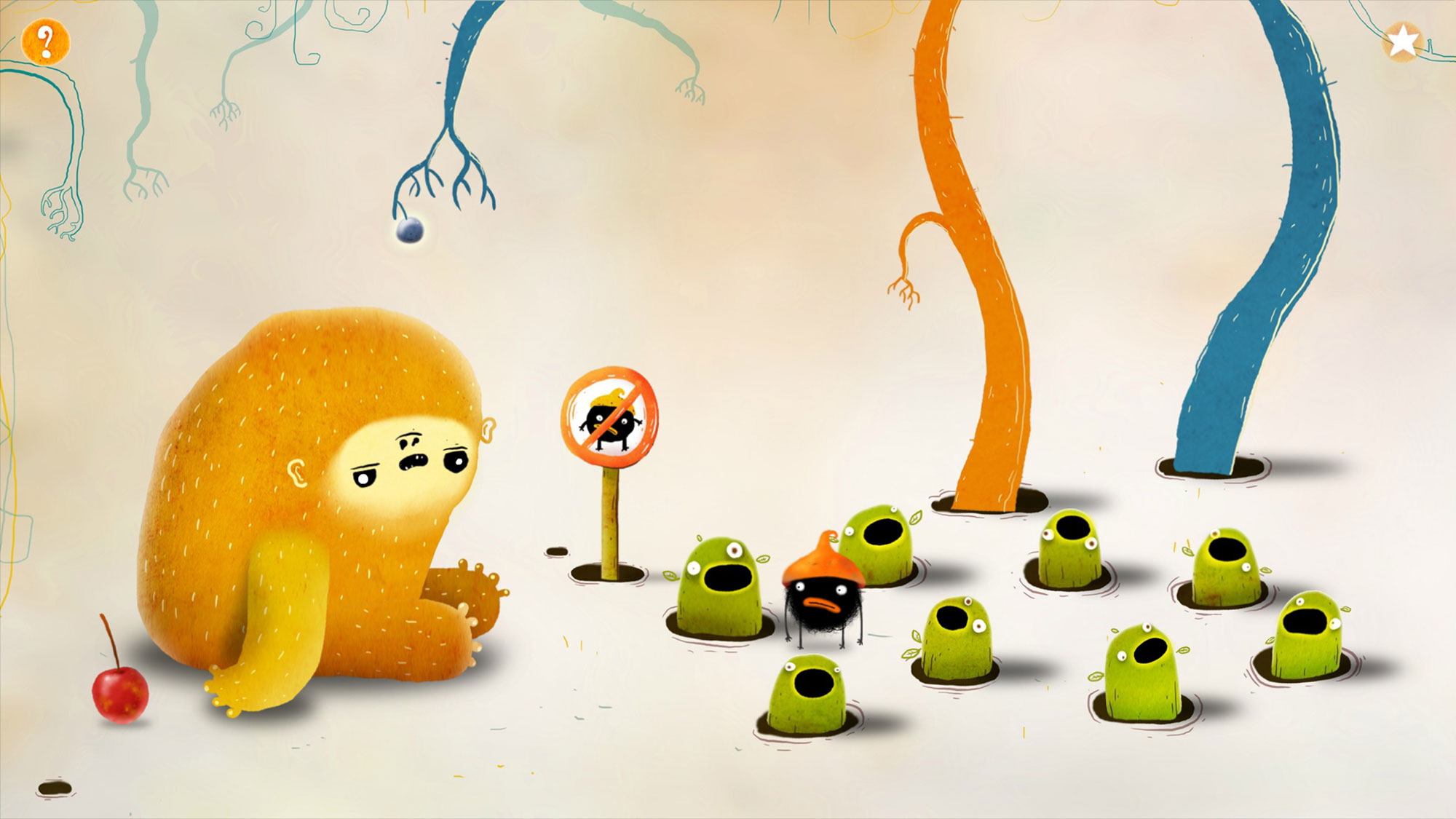 In summary, your experience with Chuchel will depend massively on your own sensibilities and your level of humour. For those that like the circus and haven’t really played many point-and-click games, Chuchel may provide a few laughs and a pleasant diversion for a couple of hours. For those whose comedy doesn’t lean that way or that prefer something a bit more mentally taxing, this will leave you frustrated, angry, and possibly homicidal.