Ben says: "An interactive guide to funeral preparations rather than a tycoon simulator, this educational game has a very strong narrative that will stick with you for a long time. It also dispells many myths about embalming and cremation whilst maintaining a deep level of respect for the topic."

A homeless gentleman has been admitted to the funeral home. My corporate boss just wants it out of the way as quickly and cheaply as possible so a standard cremation is performed. There is no jewellery or personal effects, all that is needed is an identity tag in the coffin, the leftover bones to be put through the cremulator, and the ashes to be placed in an urn. The last respects must then be paid.

I’m the only one there. 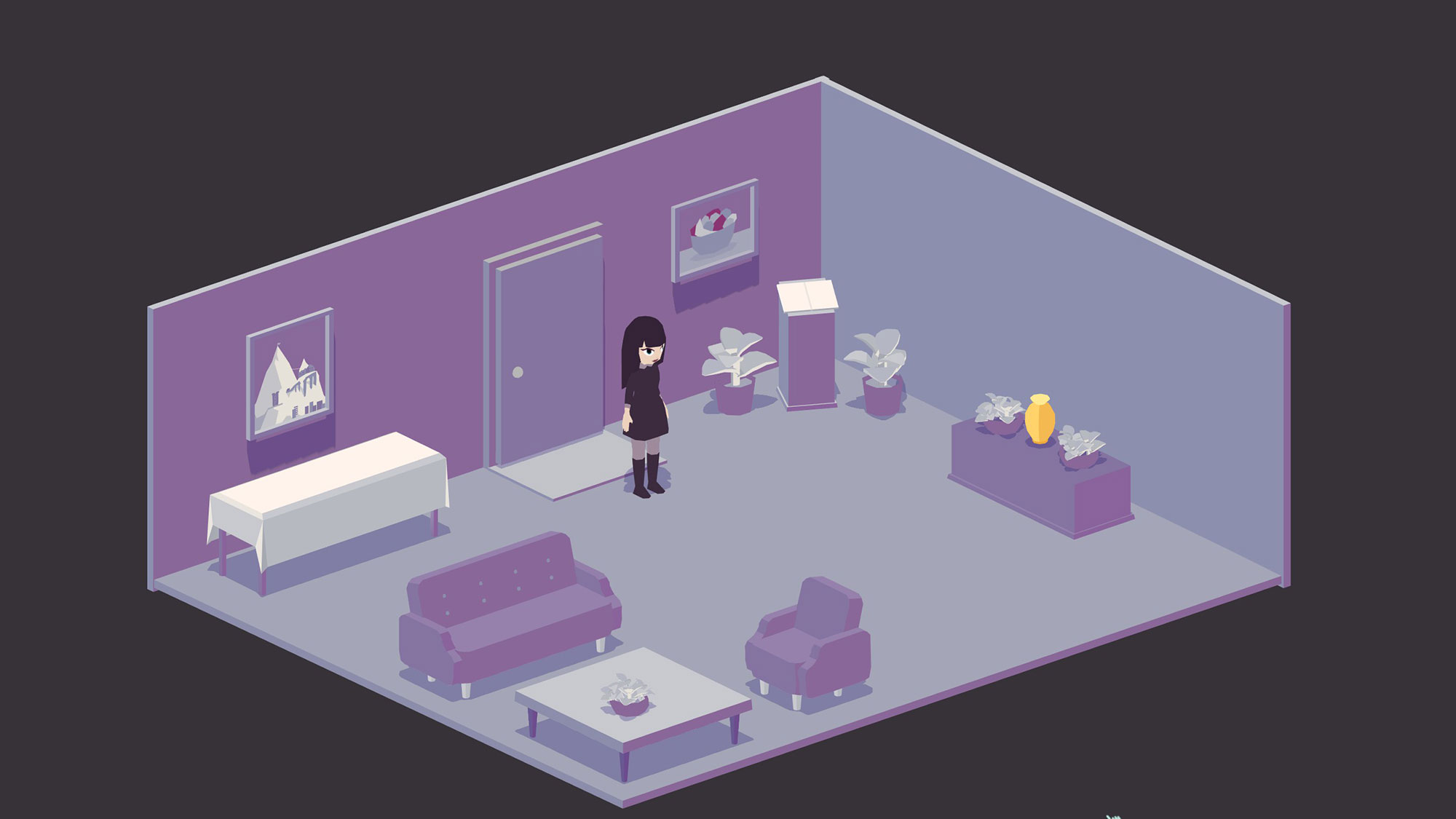 There are usually several people to interact with at the funeral. Not today.

Welcome to A Mortician’s Tale, an interactive art piece that aims to educate you on the work of a funeral director from cremating to embalming. The first thing to emphasise is that whilst this is advertised as a “narrative-driven death positive video game”, it really is more of an interactive story book rather than the funeral home simulator some may have expected. The reason for this is simple; it is meant to educate people rather than be disrespectful about the profession. Whilst it would be easy to go down the Papers, Please route and have you churning bodies out of the morgue as quickly as possible, that would belittle the entire premise of the piece; understanding.

You play as Charlie, a mortician recently hired at a mom-and-pop funeral home. The story is played out over several months of which you’ll get to experience individual days performing the various tasks that are required whilst a narrative is delivered purely through emails on your computer. A typical day will see you read through your emails, prepare a body, and then attend the funeral. This is repeated several times showcasing various preparation techniques until the story resolves itself. 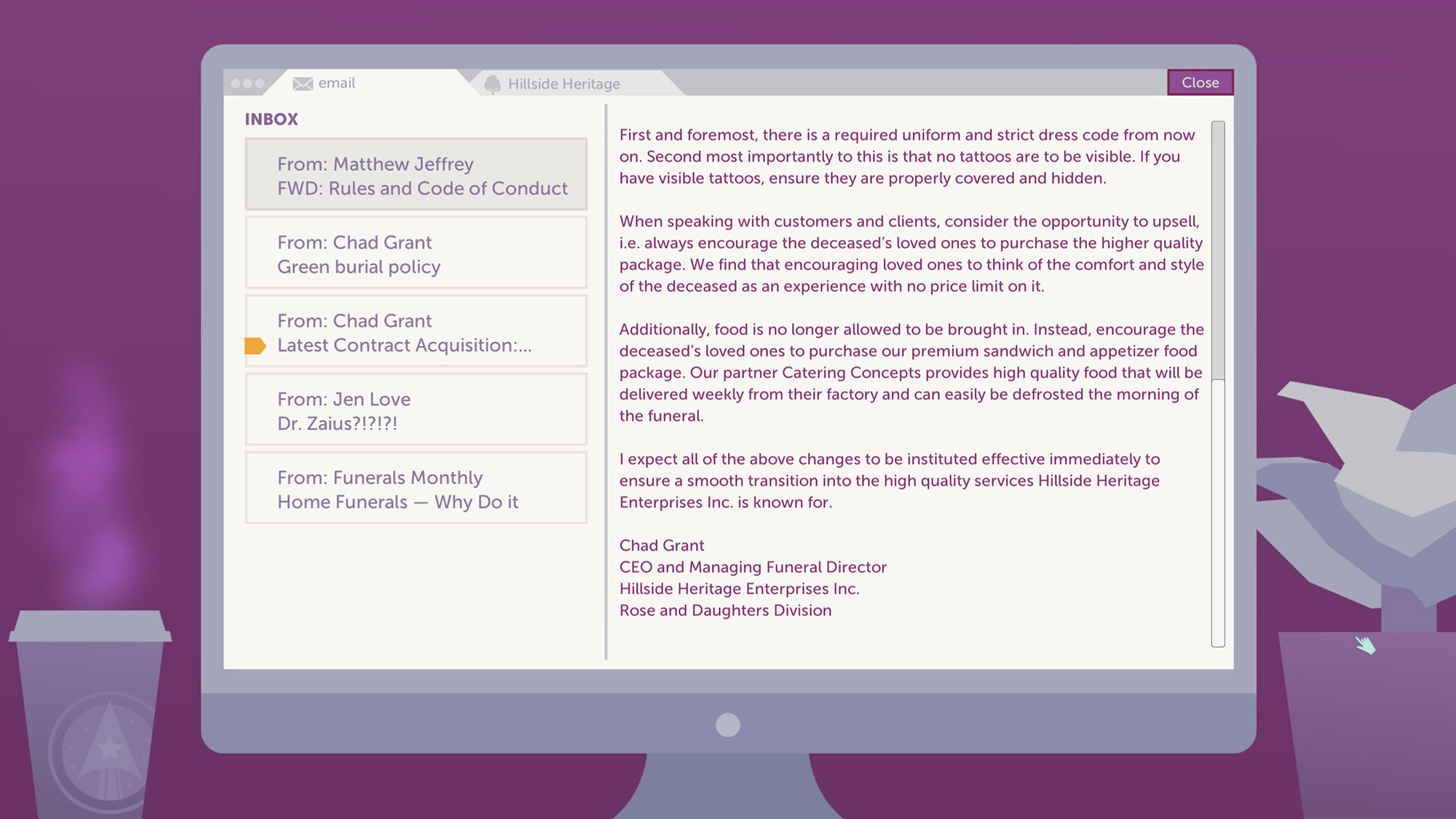 “Consider the opportunity to upsell”

The email system works well with several story strands being delivered day-by-day from the financial struggles of the funeral home owner to the work and love life of your long-distance friend. There is also an educational newsletter featuring information on how funerals work in other cultures, debunking common myths around body preparation, and listicles such as “what not to say at a funeral”. I found the newsletter to be massively insightful1 and learned several things from it although it is worth pointing out it is forthright with its own views on eco-friendly funerals and transgender handling.

To continue with the game, you’ll need to give an auto-response to the funeral home owner which in nearly every case is a single button saying “yes”. I believe there was only one body I had the option to turn down which was intended as an ethical dilemma; would you be comfortable with doing an open casket funeral for a young man who committed suicide as his family is able to legally override his request for a cremation?

The story takes a darker turn later when you have a new corporate boss who is pushing for lower-costs and higher-turnover. A particularly dark email is one in which he celebrates at getting a contract to dispose of cadavers from the paediatric and maternity wards at the local hospital. Fortunately you don’t have to deal with anything like that directly but it can be an uncomfortable read at times. 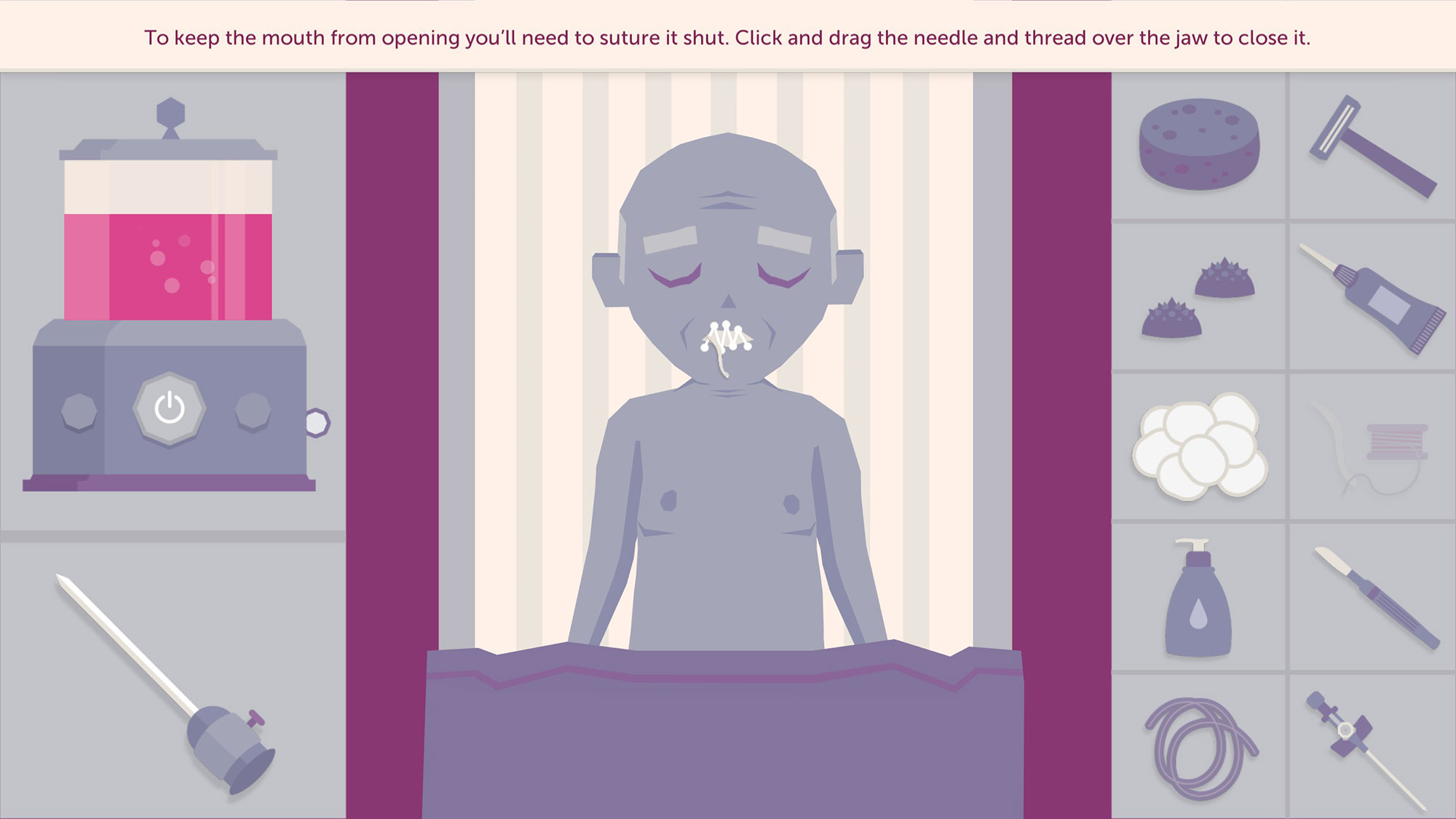 The actual process of preparing a body is probably the most eye-opening2 of the game. Each body has specific requests that need to be met and you’ll be walked through every piece be that placing a cotton ball in the mouth and stitching it shut or massaging the limbs as embalming fluid is pumped through the arteries. Each interaction plays out a little like a child’s iPad game with you needing to drag a little razor over a body to shave it or picking up the bones from a pile to drop them in the cremulator. A message at the top of the screen will always tell you what to do next and there is no way to fail; you physically can’t do anything to derail the process. Again, it is worth pointing out that the first few times you do this are not a tutorial preparing you for when the training wheels come of but instead just a step-by-step guide to explain how morticians work.

There is a fair amount of variation as you progress as embalming and cremation require different steps; there are also the occasional new techniques such as removing a pacemaker prior to a cremation3. You can breeze through some of the later parts from memory without reading the steps which is enjoyable as you feel like you are beginning to understand how the process works.

Once the body has been prepared, you’ll then need to attend the funeral where you can pay your final respects. If you wish, you can interact with the casket or urn and then leave straight away but everybody in the room can be spoken with; this offers up both an interesting take on modern life but also injects some humour into what can be a moving experience. 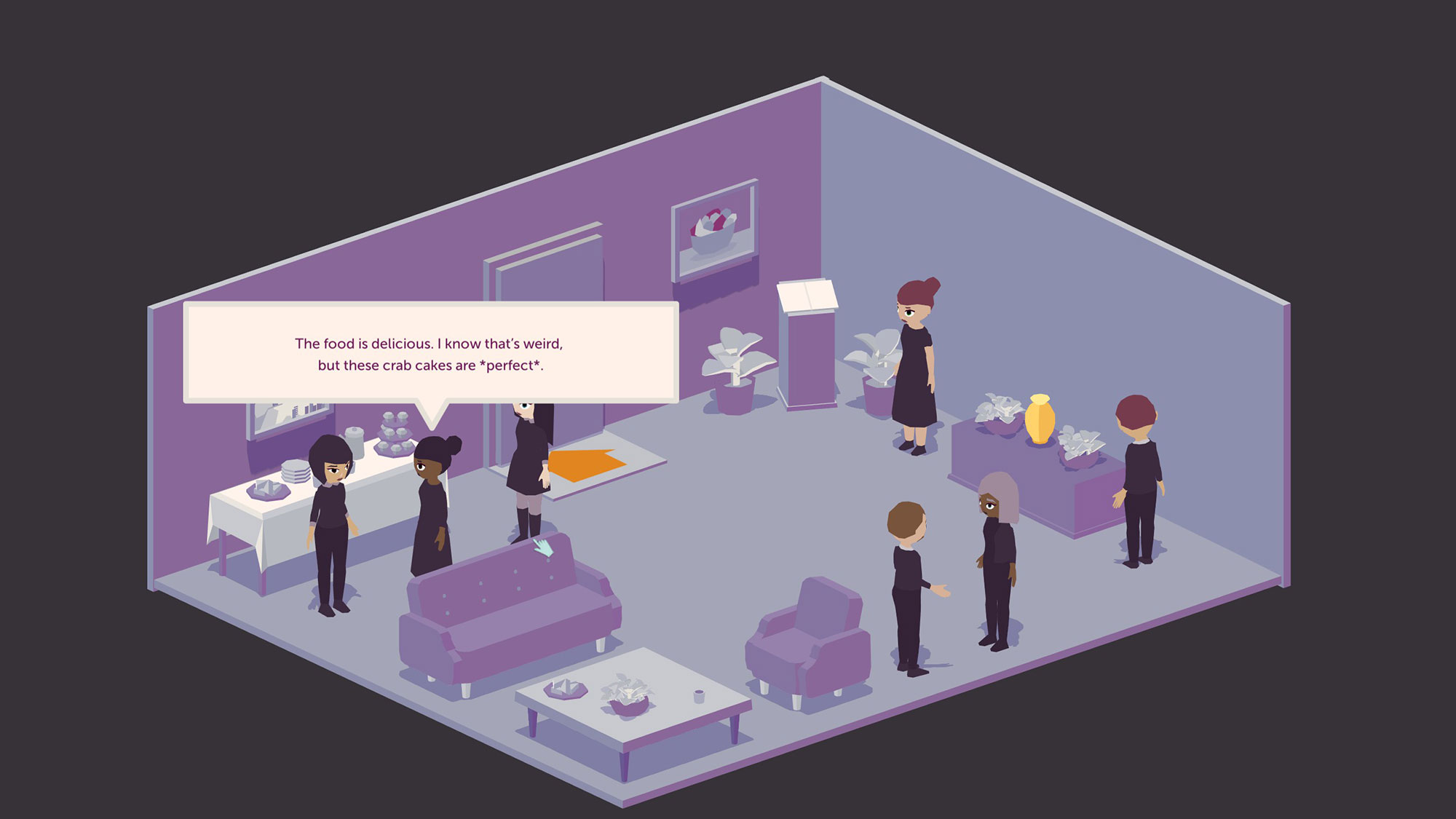 Not everybody at a funeral talks about the deceased

On the next day, you’ll sometimes have an email about the funeral you just completed be that a simple thank you from the family or as a means of performing more education. For example, one email has a bereaved family member asking for support and this is used to show that funeral directors often refer people to counselling services.

One of my favourite things about this game is the art style that uses a muted palette of purples and blues with a yellow gold call to action on what you should do next. It is a very simple style but incredibly effective and all the more impressive when you look through the screenshots at how few colours are actually used. This minimalism is also born out in the size of the game which required less than a 50MB download!

I didn’t really have any issues beyond the usual indie game lack of ultra wide support. If I was being picky, I’d point out that I hadn’t realised their were tabs on your email client and so I missed out on the Crypt Sweeper mini game4. There are 3 achievements5 in the game that can be unlocked fairly easily and there are also some beautifully illustrated Steam trading cards.

The real crux of this game though is the detail. Yes it deals with the detail surrounding funeral preparation but I was more taken with the tiny pieces of character that came through in such a clever way. One of the first emails you receive is a circulatory introduction in which it is clear you like to be called Charlie rather than Charlotte; when you receive the more corporate boss, he always refers to you as Charlotte. Such a tiny thing, but one that really helps bring the narrative to life which is key in an experience like this. 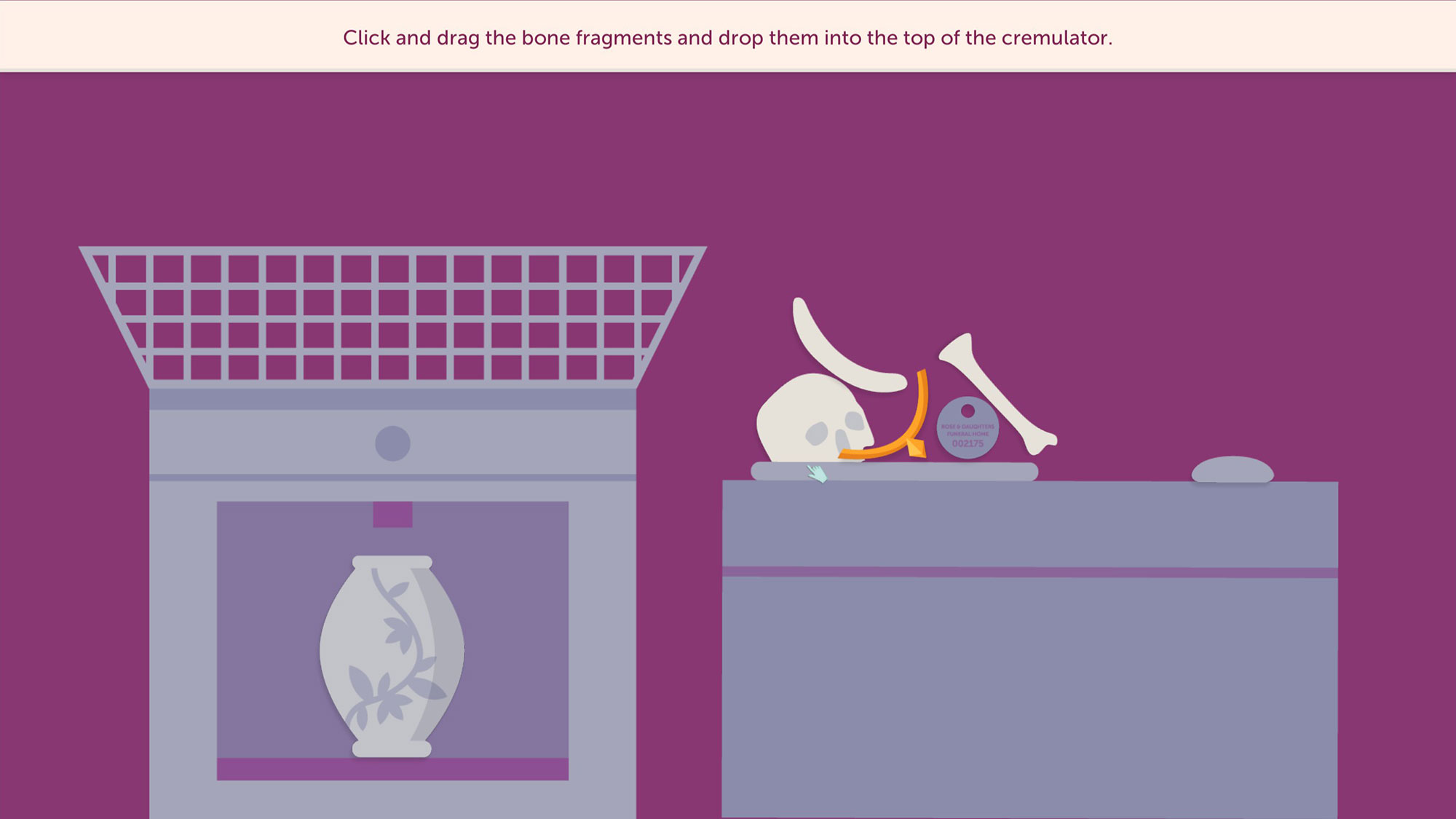 The cremulator, breaking bones and myths at the same time

A Mortician’s Tale was a very different game to the one I expected. In my head I envisioned a trimmed down version of Theme Hospital but instead it is more akin to an interactive guide to funeral preparations. There are many reviews on Steam that look at it through this simulator genre lens but that is to miss the point; this experience, short and led though it is, provides a welcome look at an industry that many have very little knowledge of and provides an education along with a deeply interesting story. Whilst I felt that the corporate bashing was a little heavy-handed6, the majority of the game has an incredibly strong narrative and is something I will remember for a long time.

The thing I like most, though, is that many “non game” games lean on being artistic; this instead leans on education and is all the better for it.