Ben says: "The best platformer you can currently get on iOS with a premium console Rayman feel about it. Slightly let down by a lack of Apple TV support and some controller issues but a great story and wonderful narration makes it a must play. If it were avaialable on Switch it would be a 5/5 game for me."

Despite the almost perfect device size, the tried and tested platformer genre has never really felt quite at home on mobile. Ever since Canabalt launched on iPhone back in 2009, nearly every developer has moved to endless running including such illustrious platforming icons as Mario, Sonic, and Rayman. This is likely a natural side effect of the constraints of touch-screen led devices; they do not lend themselves well to fast paced accurate jumping. But could they?

Enter Oddmar, an iOS exclusive platformer that is missing the two things you might expect when you hear the words “mobile platformer”: endless running and a free-to-play model filled with horrors. This is a bona fide traditional platforming game sold in the traditional way1 but using an intuitive touchscreen control system. It’s a collaboration between Mobge (who I’ve not come across before) and Senri who are no strangers to the platformer genre having developed the breakaway hit Leo’s Fortune. 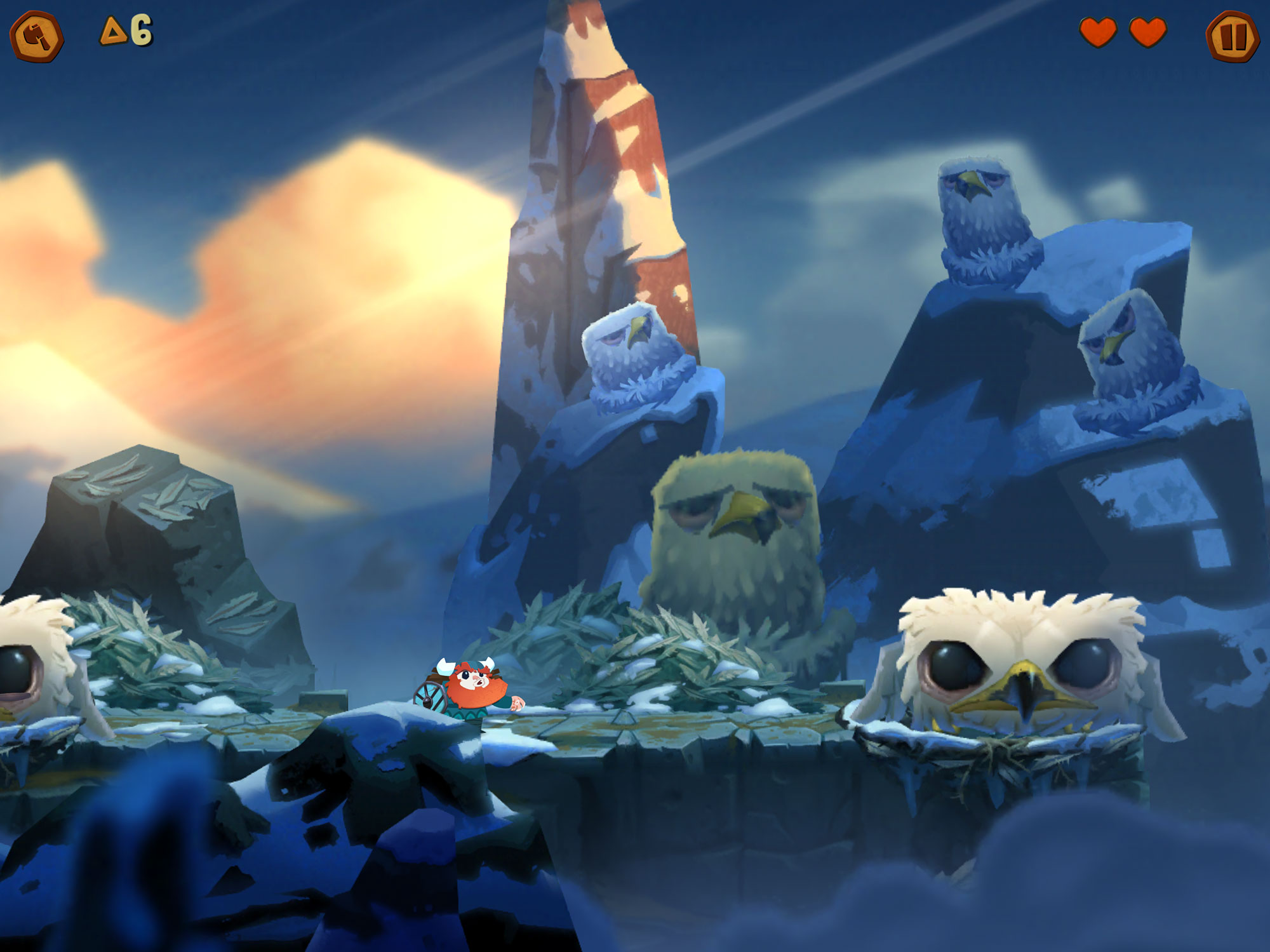 This doesn’t feel like an indie title. If anything, it feels like it was developed by Ubisoft Montpellier as the similarities to the modern console Rayman games2 are numerous both in terms of level design, scope, and the hand-crafted illustrative design.

You play as the titular Oddmar, a viking who is forever in the shadow of greater men. When disaster strikes and his clan disappears, he must embark on an adventure to save them from the God of Chaos; Loki. The story is pretty good and is brought to life by a number of TV quality animated cutscenes along with excellent narration.

In terms of controls, using your left thumb on any part of the left screen will create a virtual thumbstick locked to a horizontal plane that will allow you to move left and right. Rather than using virtual buttons or another stick on the right hand side, you instead can swipe with your right thumb to jump3, swipe downwards when airborne to do a shield slam, and do a simple tap to attack. Whilst the control scheme is simple, it is one of the first platforming games I’ve seen on mobile that actually gets it right. Complex manoeuvres such as alternating wall jumps interspersed with attacks are a breeze and I only had a handful of occasions where I failed due to a controlling issue. 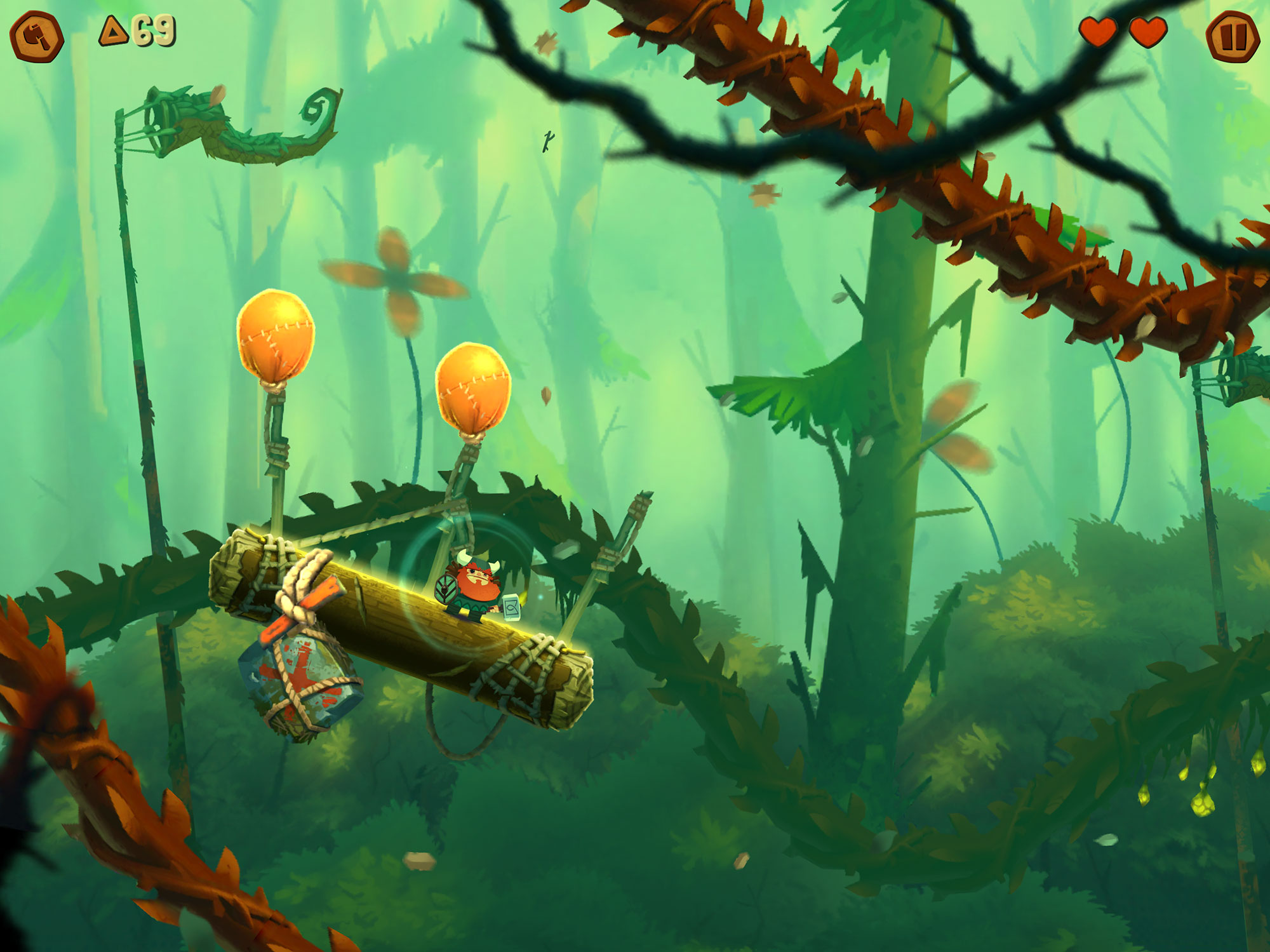 Everyone loves a physics-based puzzle level…

There are four differently themed areas to explore throughout Oddmar each containing five levels and a boss fight. Whilst it took me just over 3.5 hours to finish the game, there is a certain amount of replayability thanks to several collectibles and challenges. The first of these are basic coins that are found floating throughout the levels and as a reward for killing enemies (achieved by jumping on top of them Mario-style or hitting them with your weapon). At certain points you’ll encounter a merchant who can sell you new weapons and shields in exchange for the coins you’ve collected across the entirety of the game. In addition, you get a special token against a level if you manage to beat the par number of coins - I typically got this on every level thanks to my fastidiousness in collecting everything, no doubt born from the LEGO games.

Another set of collectibles are the three secret coins per level. These are incredibly similar to the large coins in Rayman Legends including the fact that they are often hidden in the same way be it behind a bit of wall that disappears as you get near it or hiding just below the screen where you’d expect there to be a fall to your death.

Finally, there is a challenge coin that is usually achieved by doing a speed run to the end of a level or by completing one of the “dream world” sequences. These mini-levels are activated by getting poisoned by a weird little plant guy and are a much more mobile experience including a continuous running sequence, arena fights, or climbing up a vertical maze as it slowly descends into the ground. There are some fairly weird sights in these challenges but it feels like a nice way of adding elements that wouldn’t necessarily make sense in the Viking world. 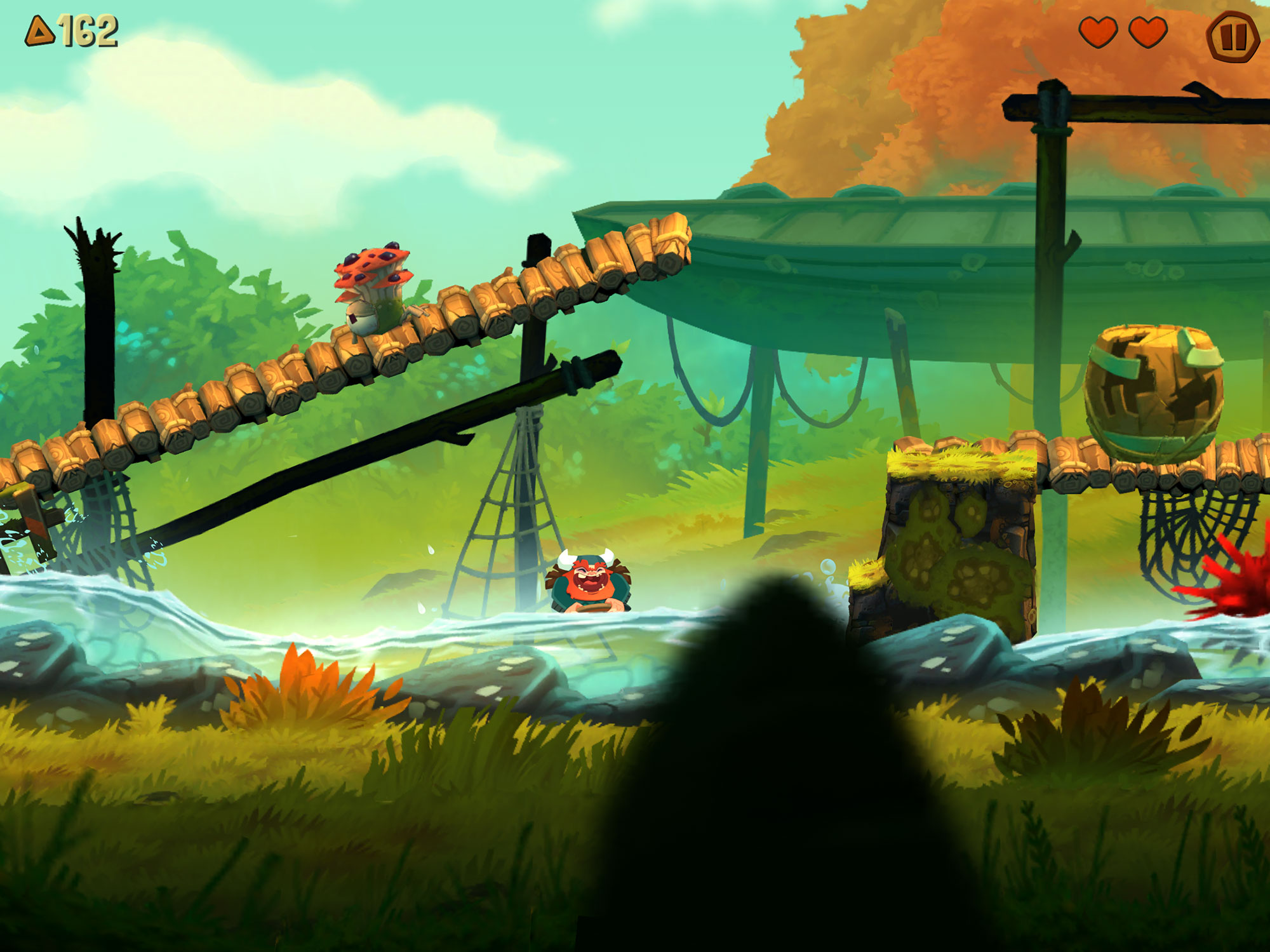 I loved the various animations for Oddmar; here is is enjoying some shield surfing

One of the things I found so endearing about Oddmar is the sheer number of different animations for your character. This is most noticeable when jumping around as you don’t see the same animation over and over but instead get a different one from a large pool with every jump. I tried to screenshot him doing a belly flop but it would only show up every 20th jump or so!

This depth continues into the gameplay itself with a wide ranging variety of platformer elements including vine swinging, shield surfing, and physics-based puzzles around weight. I particularly enjoyed a segment which sees you luring enemies on to switches so that you may pass through multiple locked areas. There are also levels which are entirely vehicle based (or should I say wild boar based) that help keep each area feeling fresh.

Special mention should also be made to narrator Julian Casey4 who does a wonderful job at telling the story providing the voices for several different characters5. His voice flitted between sounding like David Wenham, David Tennant, and Jeremy Irons and puts many AAA game voice actors to shame. Whilst I felt at times that the amount and length of cutscenes were too much (especially for a mobile game), the depth of the narration continued to keep me interested in the story. 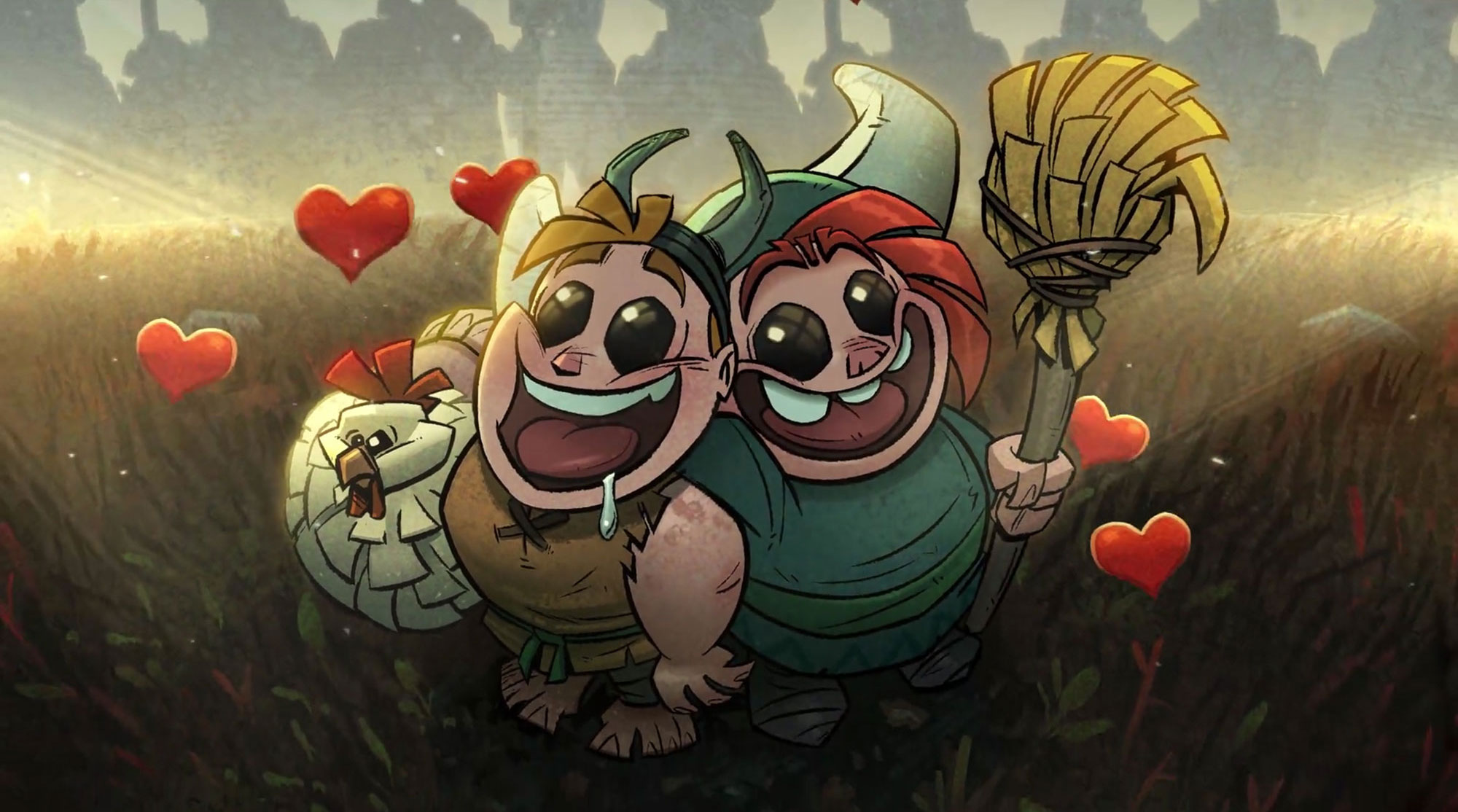 The artwork for the story cutscenes is incredibly well done

On the negative side, I did have a few instances when the controls failed me and led to my character going the opposite direction to the one I wanted. This only happened rarely but always led to frustration, especially as the same issues arose when using a paired controller. There were some areas where your jumps are clipped in such a way that you end in the right place and so I wonder if there was something occurring to try and push me in the direction that I didn’t want to go. Fortunately it didn’t happen often and there are generally lots of checkpoints throughout each level making it trivial to try again at a difficult section. This can’t be said of the boss fights (especially the last one) which have no checkpointing and also had a habit of being of the “jump-around-until-a-MacGuffin-appears-that-will-let-you-hurt-them” variety.

I was pleased to see that both On-Demand Resources6 and iCloud syncing were used leading to fast downloads and the option to keep progress synced between iPhone and iPad but this leads to my biggest criticism; there is no Apple TV version of the app. I’d played a couple levels on my iPhone X and iPad Pro and then thought it would look great on the Apple TV 4K but the only way to play currently is to use AirPlay streaming which is terrible7. This doesn’t make sense to me when arguably the two biggest barriers to supporting Apple TV are controller support and On-Demand Resources. It is feasible that they are still trying to get it to work with the Siri Remote but this is no longer a requirement for Apple TV games so could be ignored. 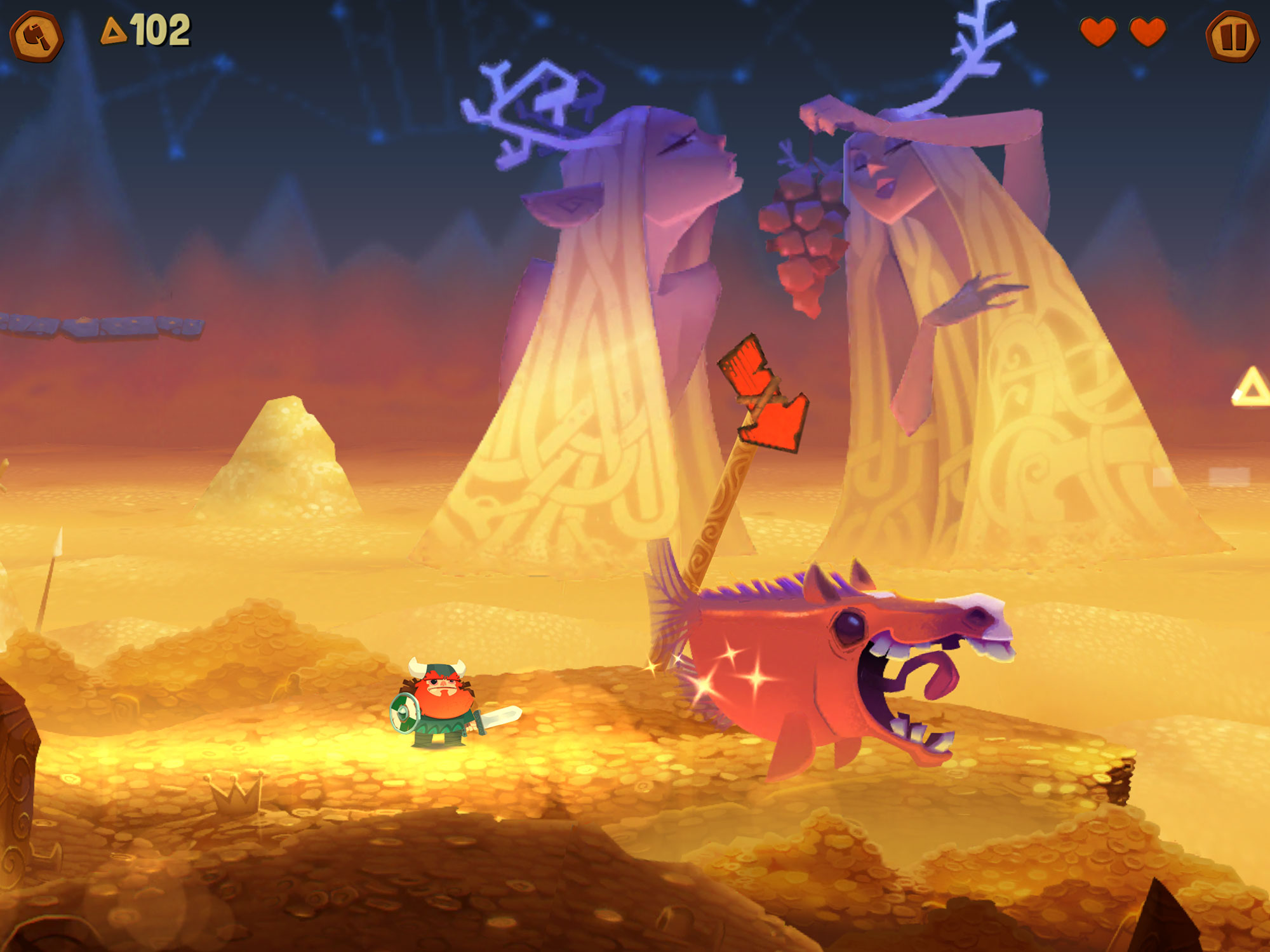 This screenshot continues to raise questions

Oddmar is without a doubt one of the best platformers I’ve played on mobile but I can’t shake the feeling that it is the wrong platform for it. Whilst the touch controls are very incredibly good, they aren’t quite perfect and this is true even when using a paired controller. The lack of an Apple TV version is also disappointing given how the majority of the pieces required are already in place. I would expect that it will branch out onto other platforms in the same way that Leo’s Fortune did, especially given the positive critical review thus far.

For the sake of £5 it is definitely worth playing today but I would have eagerly paid double or even triple that to play on the Switch or PC. I can’t help but feel it would have been even more enjoyable on a big screen with a decent controller.