Ben says: "Beautiful artwork, witty writing, and an incredible development story make this one of my favourite games I've played this year (3 years after its release). If you like the Ace Attorney series of games and enjoy a good pun, this game was literally made for you."

Like most of you reading this review, I have a fairly hefty collection of games that fall under the category of “that looks awesome, wish I had time to play it”. Aviary Attorney is one such game that I received as part of a Humble Monthly several months ago and have been itching to play ever since. Last week I was finally able to jump in when I had some unexpected downtime and noticed that it could be played on my MacBook. After reading just 4 lines of dialogue, I was hooked. 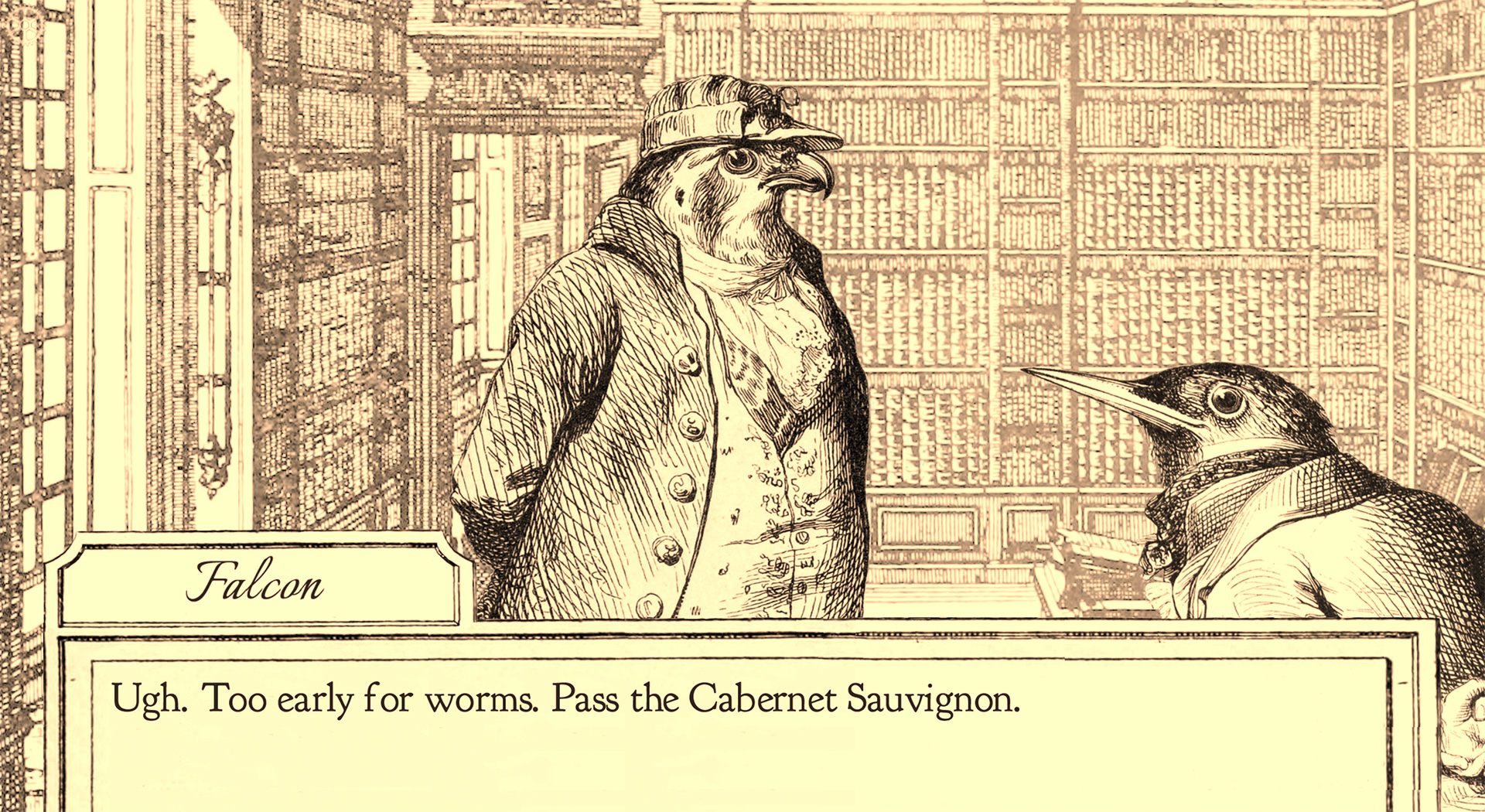 Jayjay Falcon is my kind of bird

Developed by UK-based Sketchy Logic and released in 2015, Aviary Attorney is essentially an Ace Attorney game set during an 1840s French revolution with a beautiful anthropomorphic wrapper. The art style, which I’ll come back to later, is what will draw1 you in but the witty writing is what will make you want to complete the game in a single sitting.

You play as Jayjay Falcon, a defense lawyer with a taste for Cabernet Sauvignon and justice. Along with his assistant Sparrowson, you’ll embark on four separate cases that are connected together with an overarching story of revolution in the streets of Paris. This story comes to a head in the conclusion of Act 3 in which the decisions you’ve made thus far will decide which version of Act 4 you’ll play from three possibilities.

One of the most interesting aspects of the game is a system of time pressure. You can travel around Paris via pins on a map but nearly every location will ‘cost’ you 24 hours of time. This is particularly important as you’ll often only have a week or so to crack a case thus if you waste time looking for a character in one place you may miss important evidence at other locations. 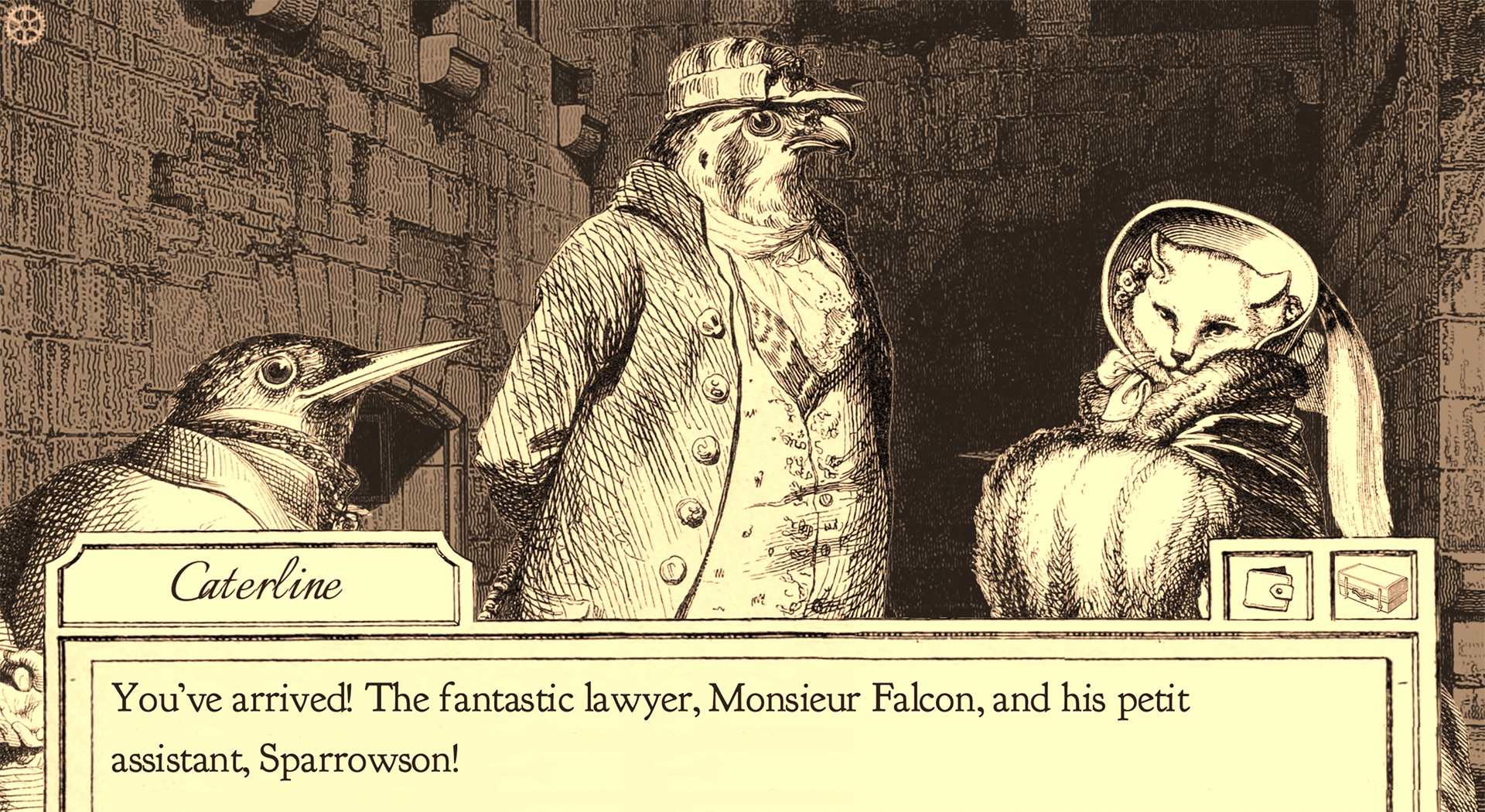 A cat with a giant muff? The obvious joke is almost too easy…

There are cornucopia of animal characters to interact with across the city from an elephant chocolatier to a kleptomaniac swan. Whilst dialogue is usually a visual story affair, there are occasional branching options in which your choices could very well make or break a case. For instance, do you threaten a potential witness with a court appearance or do you try a softer approach? You may also come across characters who require coin for their answers or evidence, something you only have a short supply of and can only gain by winning cases or card games2.

One of the key things you’ll need for solving cases is evidence. This is amassed both from speaking with characters but also from hidden object puzzles where you’ll be invited to inspect a crime scene or some other area. These aren’t particularly difficult as a thorough sweep over the area with your mouse will easily show up points of interest but the aforementioned time limitation means that you may not have the opportunity to visit locations that could contain crucial evidence. All of your items are contained in a simple inventory with basic descriptions for each item you contain. Sparrowson also compiles a “Face Book” of every character you’ve interacted with which can be used both in court and within dialogue. For example, there is one shopkeeper who can confirm who has been in his shop just by showing a headshot from the book to him. 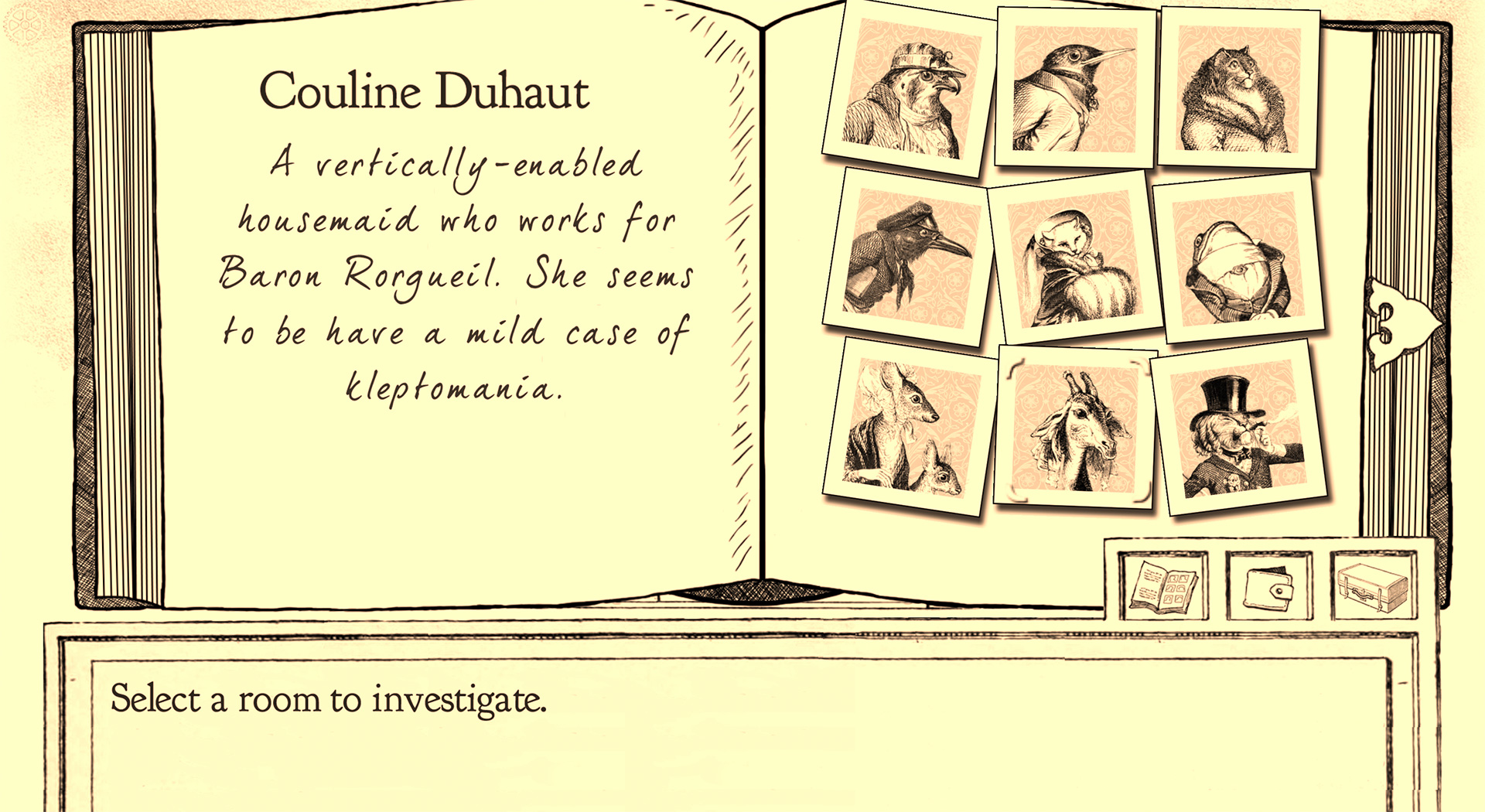 Sparrowson is clearly an amateur, he hasn’t even tried to put adverts in this Face Book

Once the number of days for investigation has passed, you’ll go to court where you’ll need to try and defend your client Ace Attorney style3. Various witnesses will be called to give their testimony which is then written up with key parts underlined. Clicking on these sections will allow you to dig into the statement in more detail and often give you dialogue options to try and point out contradictions or falsehoods. Often this will require the use of either your Face Book or a particular object from your inventory. If you manage to deduce the truth, you’ll gain favour with the jury which will be instrumental in securing a “not guilty” verdict for your client. If you don’t have the right evidence and flail around with incorrect items, then it is likely your client isn’t going to be released!

Something I didn’t expect is that there is no game-ending failure in this game. You will fail as a defense lawyer, but you still proceed to the next act just with a few dialogue changes and a darker tone rather than being asked to repeat the day. Having to live with your failures is such a small thing but it makes the game that much more engrossing, especially when you can see the affect is has on the characters and world around you. It also adds a certain layer of replayability as you’ll want to to see what happens when you both win and lose cases. 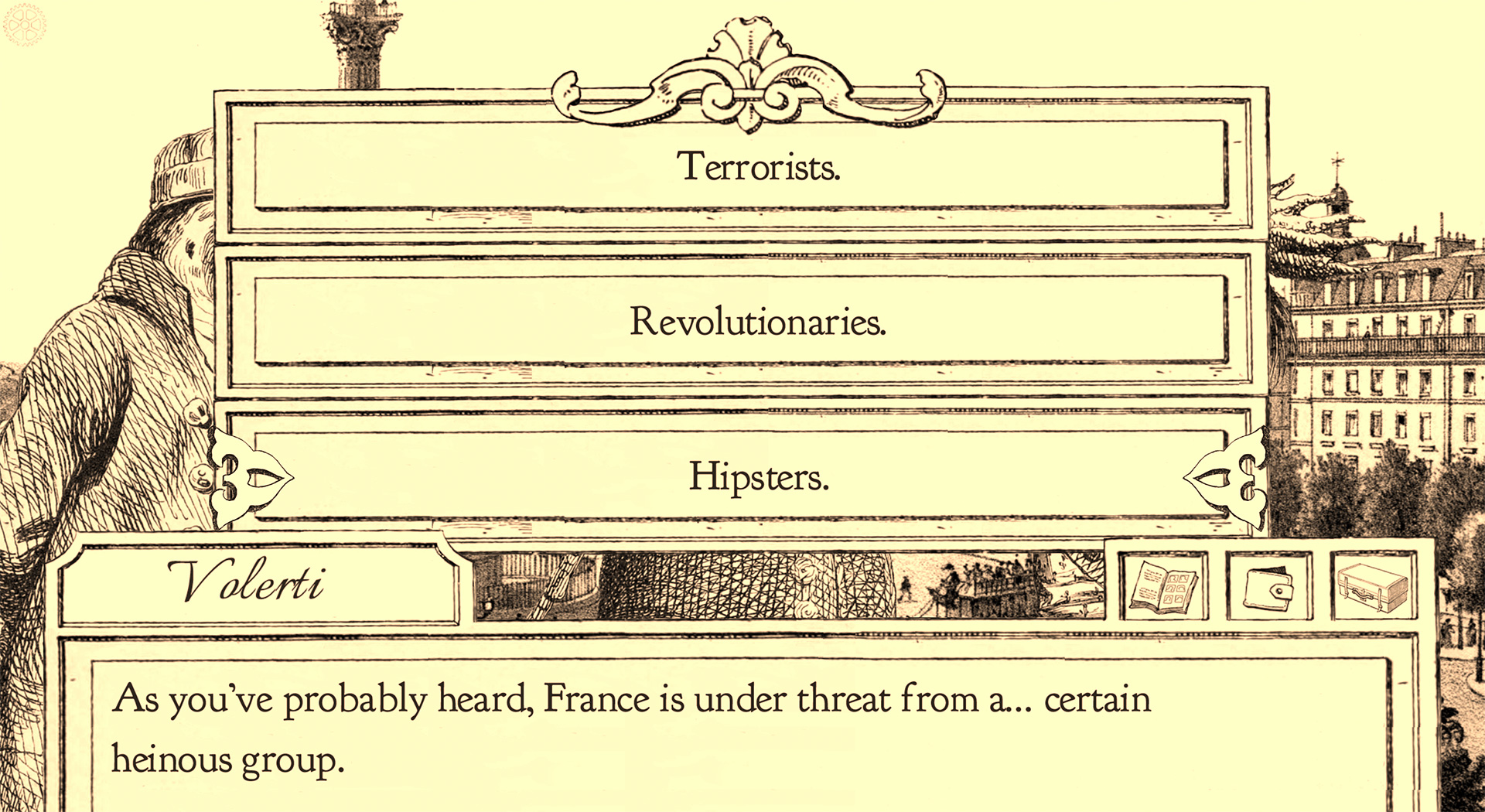 One can’t mention Aviary Attorney without mentioning the genius art style. Whilst I appreciated the look and feel from the outset, it was only when I dug into the development of the game that I discovered that it is compiled almost entirely from out of copyright works from the Internet Archive. The characters are all lifted directly from the lithographs of J. J. Grandville’s Scènes de la vie privée et publique des animaux but adapted with subtle animations and colour grading. Similarly, the background art is all from 19th century illustrated books whilst the soundtrack is provided by transcriptions and adaptations of French romantic composers (to the extent that Camille Saint-Saëns is credited as “Lead composer”). This usage of public works is incredibly clever and explains how the game was able to be created on a budget of just £18000 (which was over double the £7000 the team originally wanted in their 2015 Kickstarter). I particularly love that someone was able to look at these characters and come up with entirely new stories and connections for them almost 200 years after their creation. Unfortunately, it is something unlikely to be attempted again as it is incredibly rare to find such a wide array of characters produced in exactly the right format as Grandville had provided.

When the game launched in 2015, there were a few issues with save files and it wasn’t until a year later that the final content would be made available. That said, I have experienced zero issues with the game on either PC or Mac4 so if you were burned by issues in the past I’d certainly encourage you to give it another try today. There isn’t support for ultra-wide displays (which is to be expected) but I was a little sad that there wasn’t support for either achievements or cloud saves on Steam although trading cards are included. 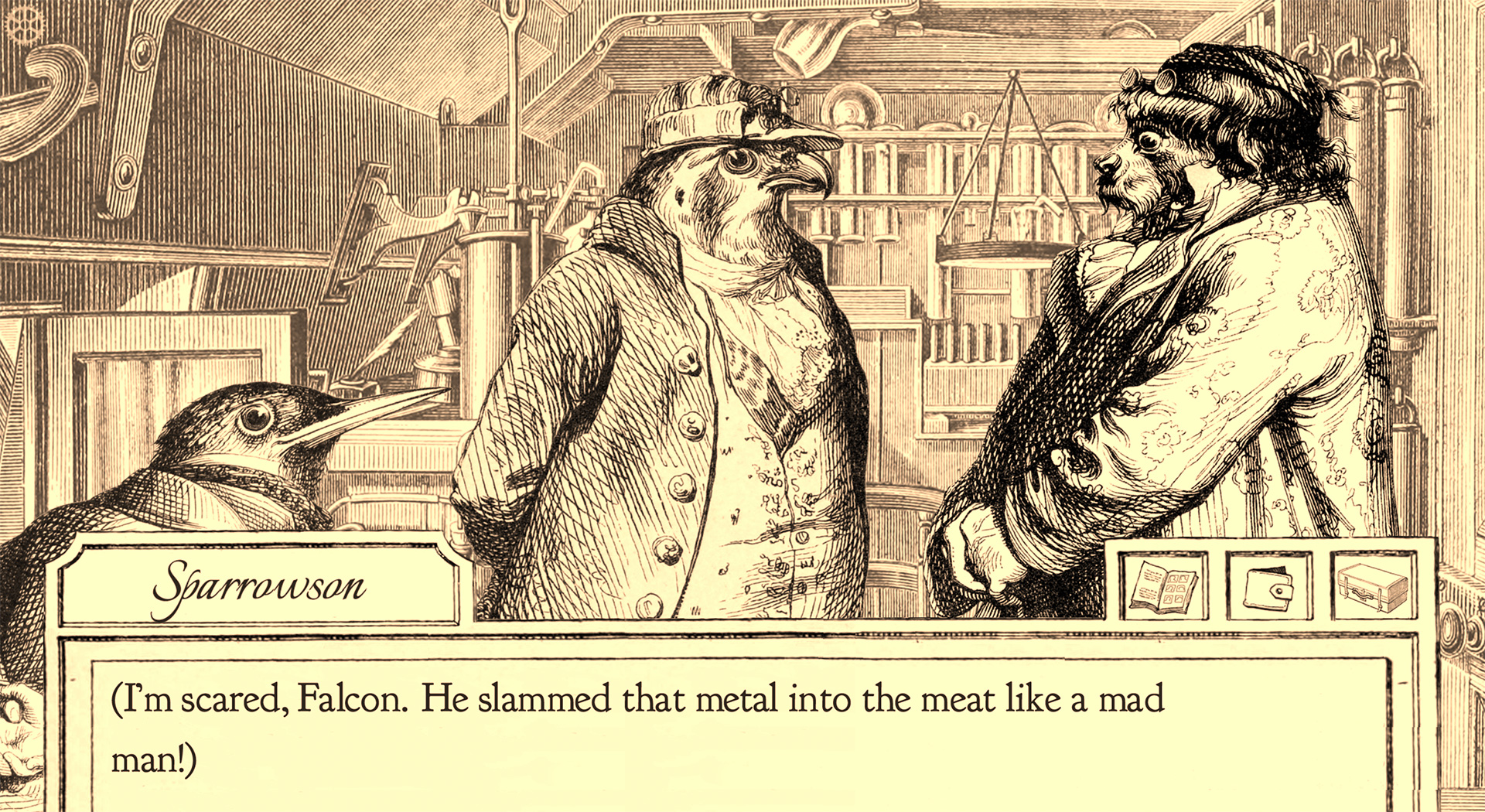 The game took me just over 3 hours on my first run but I could easily see myself spending double that re-attempting some of my failed cases or trying to see the other two endings. The ending I completed (Act 4C) seemed to suggest a follow-up could take place in Venice, something I would dearly love to see. However, the limitations are such that characters would need to be reused in their entirety (it can’t be easy to adapt the lithographs with new outfits!) or a designer would need to be bought in at great cost to produce new characters in the exact same style. Sketchy Logic also haven’t posted an update anywhere in nearly 2 years so I fear they have moved on to other things. This is a great shame as I can honestly say that Aviary Attorney has been a highlight in my gaming year, not something I expected of a 3-year old game based in 1848!